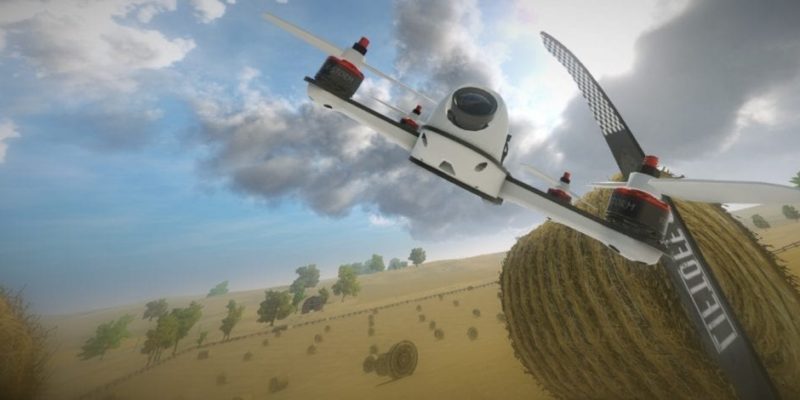 Drones are all the rage these days. You may mostly know them for the amazing photographs and video footage they’re able to capture. However, let’s not forget that these R/C machines have other uses too. Drone racing has been around for quite some time, a subset of the hobby sport of flying R/C aircraft. I’ve flown a DJI drone before and grew up piloting R/C copters, so the drone racing game Liftoff intrigued me. But I honestly did not know how big drone racing is.

Liftoff is a simulator made to appeal to the professionals, by making the virtual flight experience as real as possible. I definitely concur this is no amateur hour. But—I am an amateur. I may have some experience with R/C vehicles, but I’m no pro or even much of a hobbyist. Thus, learning the ins and outs of Liftoff has been something.

Liftoff comes with a variety of different real-world drones, all of which vary in size and performance. Each of these quadcopters has their own behavioral traits, thus making it an interesting experience learning how to fly. For the most part, your best bet is to find the drone that you feel most comfortable with. Then, spend as much time honing your skills with it as possible. If you’re feeling fancy, you can jump from drone to drone as you please. But, I personally found that the best course of action was to feel them all out initially and then settle with one specific model, especially for a beginner like me. 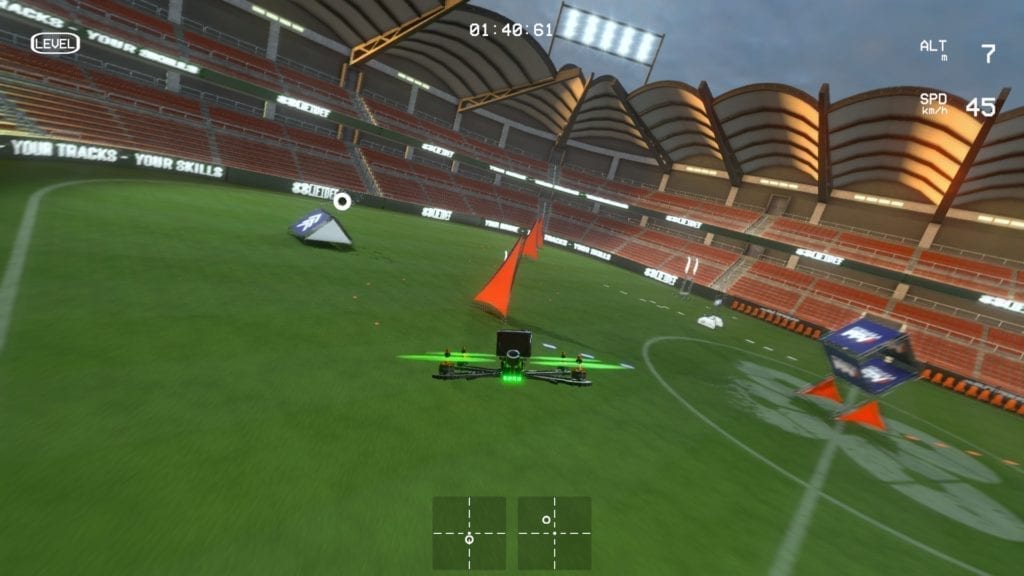 The learning curve can be steep (especially with a controller). But, just give it time.

That said, honestly, I spent a good amount of time in the beginning just crashing. When I did get my drone to move, it was usually at a snail’s pace. Liftoff is not the first R/C simulator that I’ve tried, so I found it odd that I wasn’t grasping the controls. You can have the best drone in the world, but it’s not going to get you anywhere if you can’t keep it in the air properly. Eventually, the problem came to light—it was my controller set-up.

While Liftoff does support gamepads like the Xbox One/360 controller, this software is still primarily targeted at actual drone pilots. Thus, proper R/C USB radios are really what Liftoff’smechanics are optimized for. Thankfully, like most simulators, Liftoff gives you the ability to tweak just about every value you could possibly want to.

After looking up some tutorials, I realized something that should’ve been common sense: gamepads are not like R/C radios. While the button layout may be partially similar, the actual control method is far different. R/C radios are specifically designed for flying aircraft, while gamepads are not. Thus, using a gamepad simply does not offer the same precise inputs that you’ll get with a radio. That’s especially true when it comes to the ever-important throttle.

Since I do not own a radio, I’ve had to make do with an Xbox One controller. But, thanks to the tweaking from the aforementioned guides, I was able to make a fairly manageable setup. I also made use of Liftoff‘s Steam Workshop compatibility (which is used to share user-generated content like aircraft and tracks) to download a custom drone which I found really comfortable. After taking it out on the included tracks, I gradually became more adept with flying it. I must admit, I still need lots of practice, but it’s far better than how everything was in the beginning.

Like basically any and every sport, drone racing is something you get better at with time. Liftoffdoes a good job at introducing you to the basics of realistic drone flying and then allows you to sharpen your skills by giving you all the tools you could imagine. Again, you can tweak every last detail of your drone and controller set-up. As such, you to make as many customizations as you want. You can also build your own tracks in existing environments, making use of them in creative ways to help sharpen your skills. 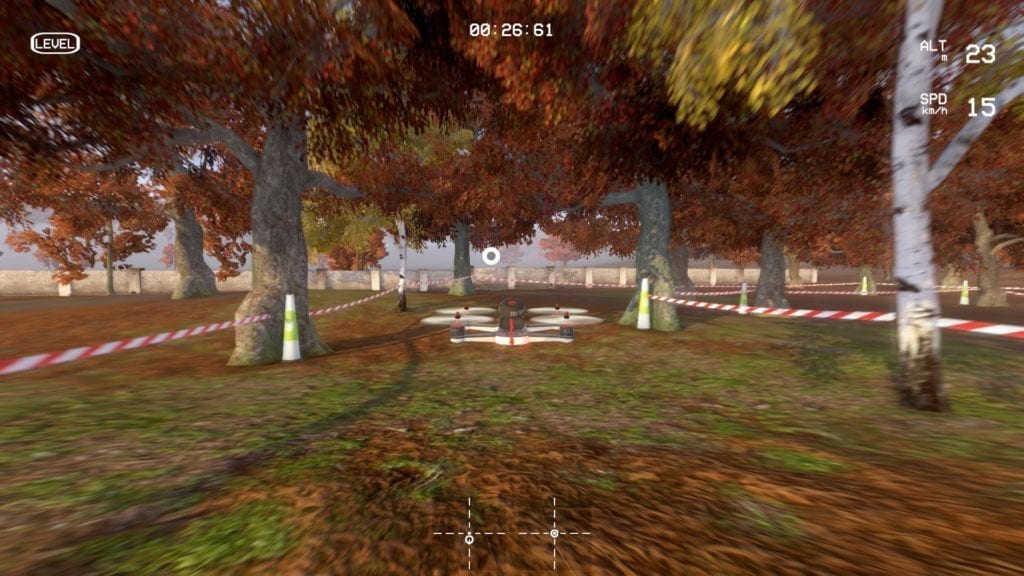 The different tracks will force you to learn how to fly in different conditions. Some are more forgiving than others.

Having the ability to download content from other users is also great. It not only keeps content constantly flowing, but it allows you to hone your skills in all sorts of different ways with varying drone set-ups and track styles. Of course, even the included drones and tracks are enough to give you an all-around crash course on drone racing.

The varying drone types (freestyle, racing and drifty) truly do all look and feel unique. Each model is meticulously detailed. You can even dive in and customize each aspect for yourself like the propellers, antenna, and battery, which only adds to the realism. The tracks range from fun to absolutely infuriating. Some are in wide open spaces like a quarry, which are the easiest to maneuver in. Meanwhile, others are in cramped, intimidating environments like an underground parking garage. You can participate in lap-based time trials or go crazy in freestyle mode, which involves earning points by doing stunts. There’s also a free flight mode for some casual fun. The drones themselves also have varying flight modes. These alter their control behavior and allow you to adapt to different situations.

Putting yourself in these different scenarios will allow you to build your overall piloting skills, gradually making you better at flying in general. Again, I’m still no good. But I noticed after a few hours that, despite still using a gamepad, my responsiveness was getting better.

That said, I’d really recommend picking up an R/C radio before flying with Liftoff. It’s not a necessity, but it will definitely offer a better flying experience than a gamepad (it’s like using a joystick for a flight simulator versus a keyboard & mouse). Even so, I appreciate the effort the developers have gone to accommodate us ‘filthy casuals’. This shows that Liftoff really does seek to attract anyone, whether a beginner drone pilot likes myself, or the professionals that do this in real life.

My frustration with this sim has literally only stemmed from my own inexperience and technical limitations. Even I can see the polish of these mechanics and physics. Thus, the only legitimate complaint I have about Liftoff is that I wish the optimization were a bit better. While performance hasn’t been terrible, it does have some frame drops and stutters. The rendering field seems rather low, too. But that aside, this is an excellent simulator, and the user-generated content and consistent official updates will surely keep it active for the foreseeable future. 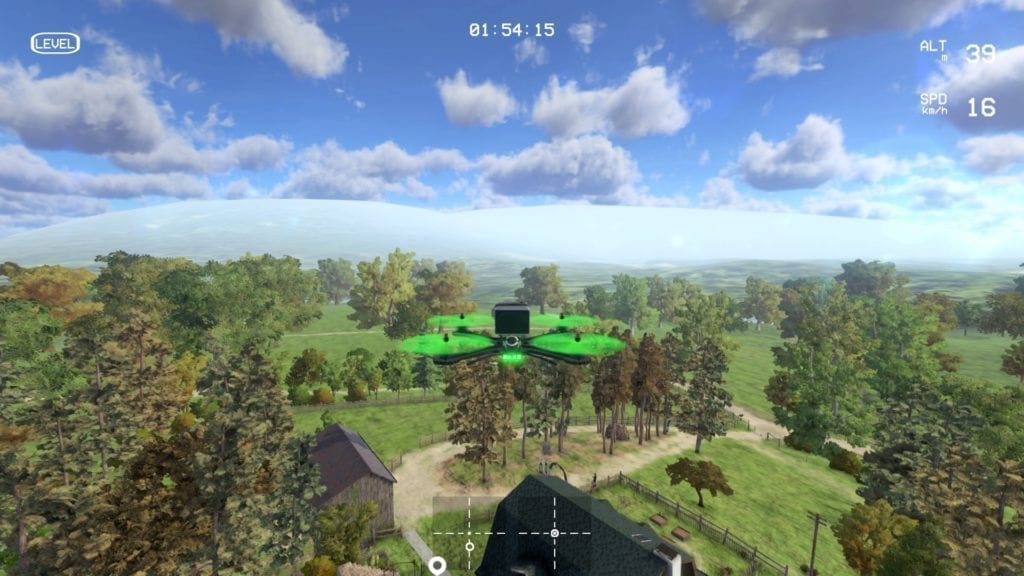 When you’re not competing, leisure flights are the best.

Liftoff's extremely technical design may scare off beginners, but practice truly makes perfect, and this sim prides itself on appealing to individual pilots.

The History Nerd: Falling In Love With Assassin’s Creed Odyssey And Greece

By Andrew Farrell35 mins ago
Reviews