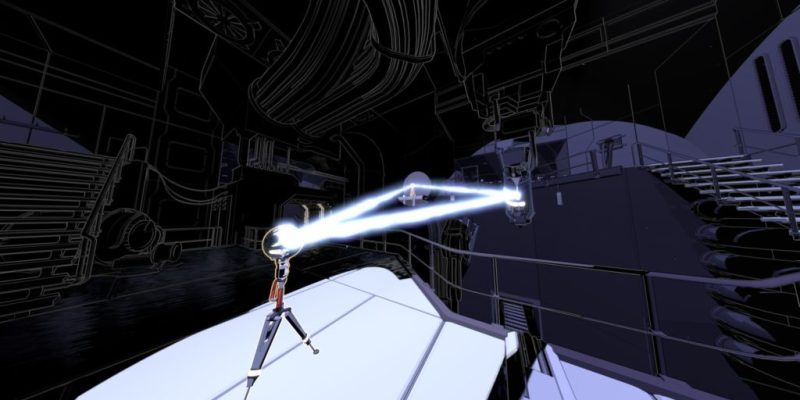 Portal unarguably had a major influence in shaping the first-person narrative-puzzler genre. Its clever puzzles, unique mechanics, and alluring sense of humor established a template that still sees use today. Lightmatter is very much in this mold.

Although it doesn’t attempt to do anything new and has a fairly basic set of mechanics, the cleverness of its puzzles and strength of its writing make it worth experiencing all the same. People won’t be talking about Lightmatter years from now, but after finishing it, I’ve found it and the ethical quandaries it puts forward on my mind.

As you’ll no doubt be shocked to find out, Lightmatter takes place in a scientific facility that has seen a bit of a catastrophe. The facility hosts the titular technology — a self-sustaining, clean energy source capable of creating infinite power for the world. However, after its official unveiling, something went wrong. Strange shadow anomalies started showing up as everything went out of control. As long as there’s light in the room, you wouldn’t even know they were there. But once there isn’t, touching the shadows destroys living creatures. 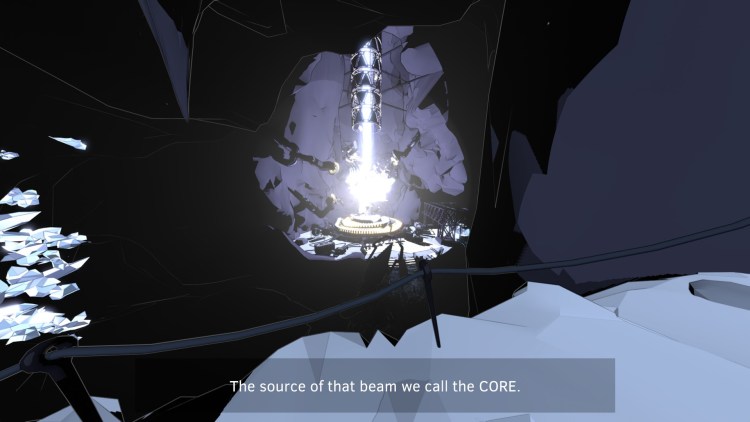 The science fiction on display here is really quite interesting. I gotta get me one of those infinite power generators that also creates murder shadows.

The game begins with the player character waking up on the floor of one of the facility’s rooms. For whatever reason, they got separated from the tour group, who has since evacuated. Upon struggling to find a way out, they’re greeted by the CEO of Lightmatter, a brilliant scientist named Virgil, who agrees to help escape from the facility.

Virgil delivers the vast majority of dialogue in Lightmatter. He’s an arrogant, driven man who is equal parts likable, bitingly funny, and morally dubious. He’s voiced to perfection by David Bateson, the South African actor best known for bringing life to Agent 47 in the Hitman games. Not only does he make the game’s narrative a joy to experience, but the writing is equally as good. The game has a lot to say about the cost of pursuing dangerous technology. Even if the puzzles were mediocre, the game would be worth playing for the story alone.

Lost in shadow, lost in fate

Thankfully, though, the puzzles are generally enjoyable, albeit quite tough. They’re all based around using light sources to illuminate pathways to reach an exit. During the first part of the game, this is achieved using lamps, while the latter part mostly utilizes devices that take energy in a light beam from a power source connected to the core. There are also some instances where you have to use both simultaneously. 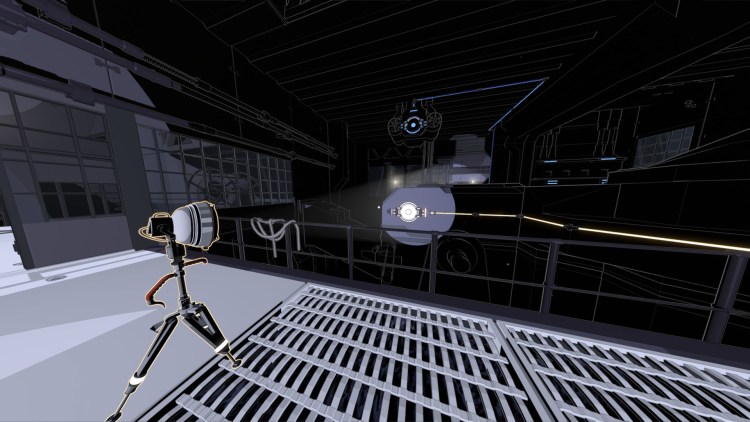 I hope you love lamp. There’s so much lamp.

For the most part, these are interesting to use and work well. There are some annoyances, though. Your character cannot jump while carrying puzzle objects, so you’ll often be trying to figure out how to move one object to another object’s location so that they may be used in tandem. Neither can be placed on slopes and it’s usually difficult or outright impossible to place them on top of many of the objects found littered throughout the facility.

You’ll sometimes need to put down items in such a way that they just barely work, leading to lots of trial-and-error deaths to the shadows. There’s just very little room for imperfection much of the time. The same goes for the lamps, as you’ll need to position them in a way that allows you to jump over some shadows to get to a safe space. But the shadows are a bit finicky, sometimes killing you even when you’re sure you avoided them. 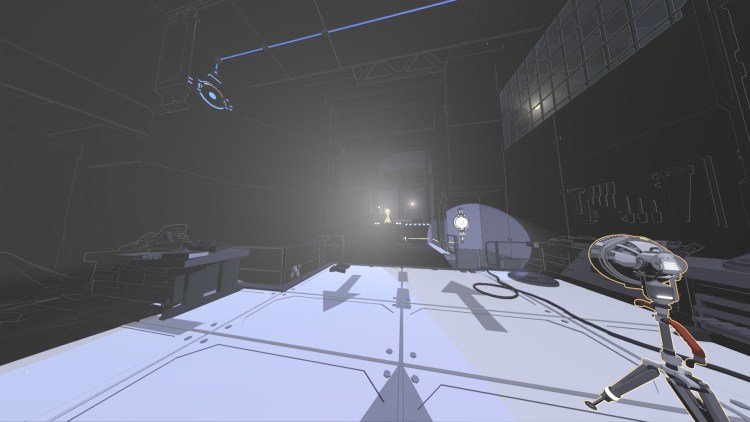 Deep into that darkness peering, long I stood there. Wondering. Fearing.

A bit behind the curve

The biggest issue I have with Lightmatter is puzzle solutions can feel more obtuse than need be. Plus, on occasion, the difficulty spikes wildly. After making it through an early section, I was hit with a puzzle that I felt the game didn’t at all prepare me for. It required me to platform across a large room, place a lamp on one side of a giant fan, light the way, and then jump back across and place another lamp on the other side before rotating the fan to collect both lamps in another room. Good puzzle games are all about a smooth difficulty curve, and Lightmatter kind of just throws that out the window with its vacillation. 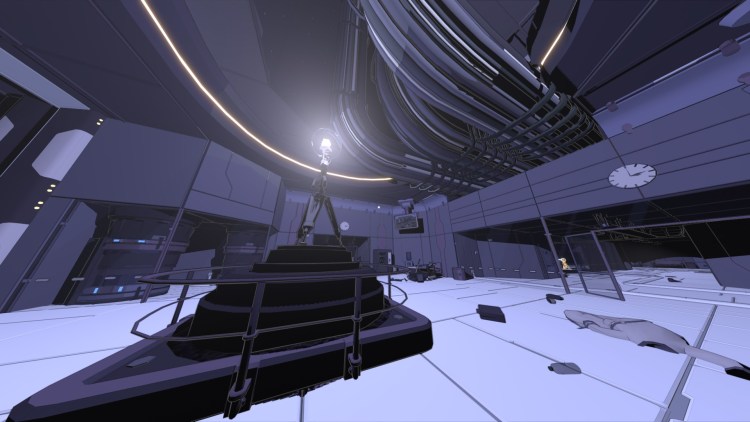 Man, how can this place not afford a janitor? Maybe they blew their budget on all those fancy orbs.

The game’s performance mirrored these issues. My GPU is a 5700 XT and I played Lightmatter at 1920 x 1080 and had a great number of frame drops. It mostly ran at a solid 60 frames but would often hitch into the 40s or even 30s without warning. To be clear, this is a cel-shaded game made in Unity. Its visuals are acceptable, even if they are bland, but poor optimization is one of the only explanations for its performance. Hopefully, this will be cleared up as people let the dev know about their rigs. 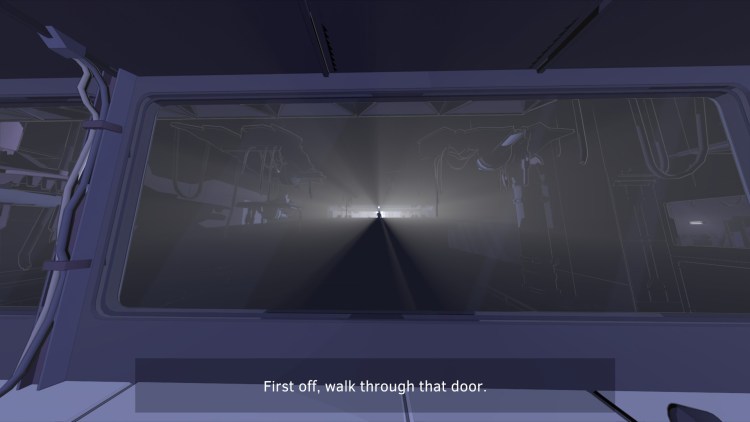 The one look you get at Virgil. If his silhouette counts, anyway.

Then there were the crashes. The game took me about 7-8 hours to get through and crashed to desktop four times. The last of these happened during a lengthy section that made up the game’s climax where it started focusing on platforming in place of puzzles. This part was entertaining and was a better way of communicating tension than turning into a walking simulator like many other games of this sort tend to do. But I certainly didn’t appreciate the game crashing and making me start it over from the beginning when I’d already made it most of the way.

Greater than the sum

To be blunt, Lightmatter is an uneven game. The difficulty is all over the place, some of the mechanics are finicky, and the performance issues are annoying. But overall, the puzzles were satisfying more often than not, and it does a great job of conveying its themes. The bit of voice-over right at the end is probably going to stay with me for a while.

By the way, it’s worth mentioning that the game has a somewhat iffy sales pitch. Going to its Steam page will see it listed as free to play, but that’s not true at all. Selecting that will only grant you a demo that you can upgrade into the full game. Obviously, this is meant to get people to try it because it appears to be free in the hopes that they get hooked and end up upgrading. This is pretty shady and I hope that they discontinue it ASAP. 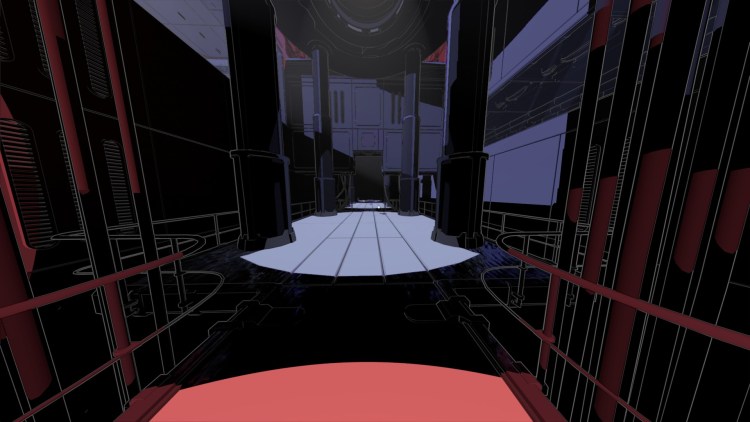 The platforming sections are surprisingly fun. It’s neat to carefully jump while avoiding a shadowy death.

Anyone looking for a good first-person puzzler with a story focus will likely be happy with what Lightmatter has to offer, in spite of some of its more problematic aspects. It has a lot of heart and the time spent getting nonchalantly insulted by Virgil is well worth it. Just be aware that it’s definitely not free-to-play.

It might have some problems with its difficulty curve, performance, and the way it's being sold, but Lightmatter is a very solid puzzle game that offers a decent amount of playtime, some very good puzzles, and a great story.