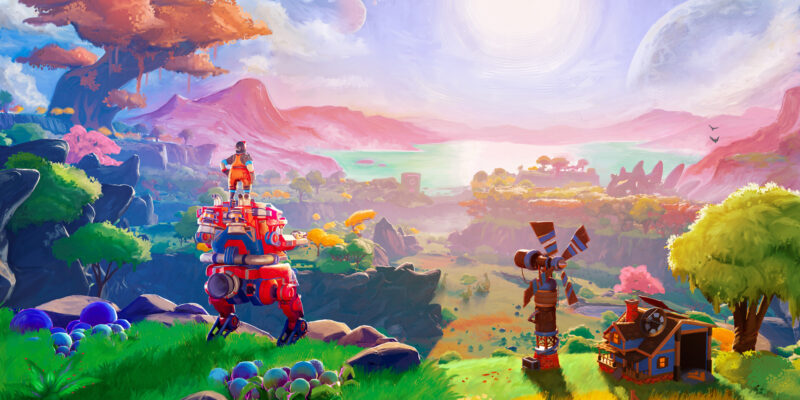 Developer Frame Break Games just revealed its new open-world farming exploration game, Lightyear Frontier. The game looks like a combination of Stardew Valley and No Man’s Sky. It blends crafting, with resource management, and base building. The reveal of Lightyear Frontier was made during the ID@Xbox Showcase on Twitch.

Lightyear Frontier will have you building your home away from home, but you won’t have to do it alone. The exploration and farming sim also includes an option for co-op where you can have up to four players working together to survive and thrive.

Even if you decide to go it alone, you won’t be without assistance. You have a trusty scanner satellite named PIP-3R that will give you plenty of useful advice. As you progress, you will also need to upgrade your trusty mech. This will allow you to explore previously inaccessible environments and gather new resources, like rare plants. But exploring in Lightyear Frontier isn’t just about gathering resources to improve your farm.

You’ll also uncover the mysteries that underpin the game’s narrative. Like a coded message that has been waiting for eons to be heard. All the while you’ll be treated to a soundtrack that’s described as cosmic country. That sounds like the space explorer’s dream theme tune.

The alien planet in Lightyear Frontier can be transformed and molded to suit your vision, you’ll just need to contend with nature. The elements can be unforgiving as the weather is constantly changing between the four distinct seasons. And the local wildlife may not take too kindly to your presence. So, maybe think about putting up a wall or two. You are exploring a new frontier after all. You know what they say, “Safety first, then teamwork.”

There is no release date for Lightyear Frontier yet and all the Steam page reveals is that it will first launch in Early Access. For now, you can wishlist the game on Steam.

Retro Games is resurrecting the Amiga PC with THEA500 Mini, coming 2022 with 25 games