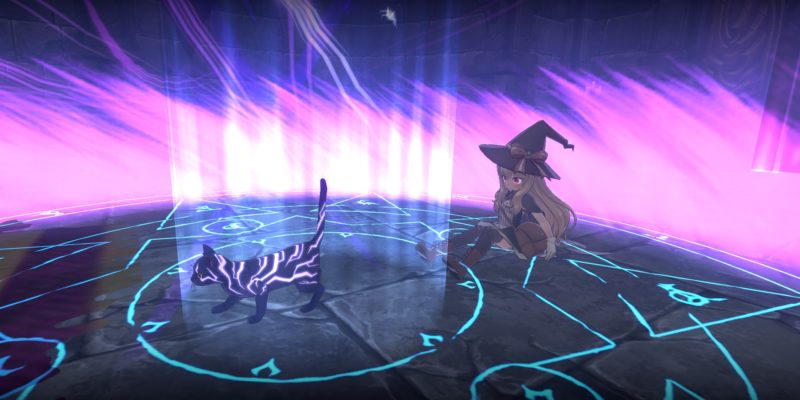 Yet another souls-like has just entered early access. It must be Wednesday. Little Witch Nobeta, while strongly inspired by the subgenre that has taken gaming by storm, has some unique, interesting wrinkles that make it well worth checking out for anyone who wants to play a souls-like that does something a little different. That being said, the game only has about half of its planned levels and is going to require years of additional development. But it’s easy to be impressed by what has already been achieved here.

Some kind of throne game

There isn’t much exposition once you start Little Witch Nobeta. You play as the titular small child as she battles her way through a castle to get to the throne. I’m not sure what she wants to find there and I sure hope there isn’t a hollowed king waiting — the shock would kill me. Along the way, she meets up with an extremely rude talking cat and it promises to lead her to the throne. Provided she not talk too much, at least.

While there isn’t much in the way of plot, Nobeta talks a fair amount, mostly to the cat. The English translation is sort of rough but it’s easy enough to take the meaning of all the dialogue. On the other hand, some of the tip instructions for how to utilize abilities can be confusing. But there’s a surprising amount of polish in place for a game that’s less than half-finished. 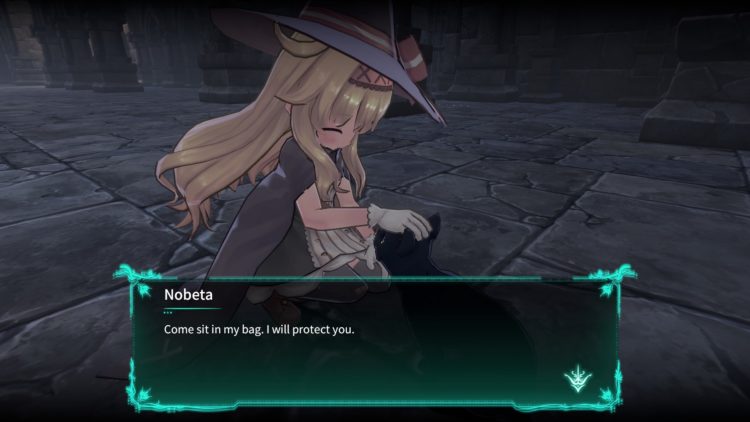 Think before you die

At first, you only have a single type of magical attack in Little Witch Nobeta. It’s a fairly standard magic missile that can be fired as long as you’ve got mana to spare. But all of your magical attacks can be charged up with the press of a button. Nobeta can’t use any magic while the spell is charging, though, so you’ll need to keep your enemies away via dodges or melee attacks until they’re ready. Nobeta can hit enemies with her staff but the damage done is very small and typically only recommended for foes you can stunlock or when your defensive options are limited.

In one of those interesting wrinkles I mentioned, hitting an enemy right before one of their attacks connect will power Nobeta up some. Similarly, dodging at the right time will grant her a small bit of mana. On top of that, dodging attacks carefully while charging spells will charge the spell up faster. Little Witch Nobeta may not have much in the way of gearing or builds but these little tactical considerations make for a compelling experience.

As you progress through the game, you’ll find additional spells and the like in chests. The second spell is an ice spell and the third is fire. You also come across a double jump and items that increase your gem carrying capacity. Each spell works similarly to guns in most shooters. The default one is a rifle, ice is a machine gun, and the fire is a shotgun. Charging the ice spell gives you a power lock-on shot that rains down on foes. Similarly, charging the fire one leads to a large explosion that can blow you up if you’re not careful. 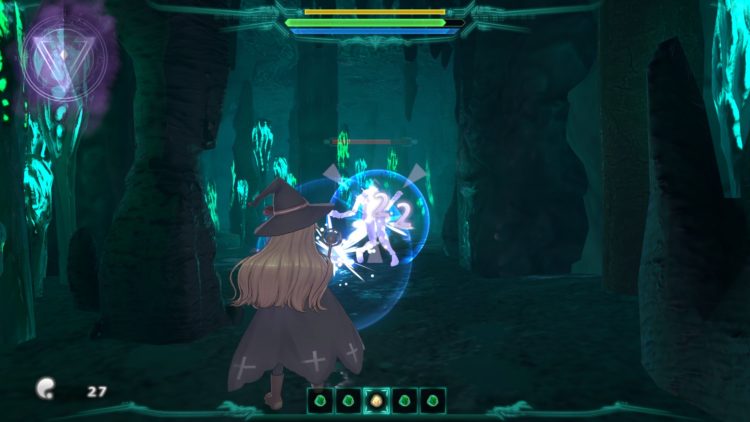 You can also find or purchase gems that heal you, refill your magic, or buff your defense. After they’re used, they’re gone for good, though. Nothing gets replenished when you resurrect. But there are often breakable containers that always drop specific gems, so you don’t have to worry about buying them. You can only hold four at once at first but I found two item upgrades as I played. Upon dying, you’re sent to your last-visited goddess statue which functions exactly as you’d imagine.

It’s there that your game is typically saved and using it heals you and resets all enemies. Enemies drop a currency that can be used to purchase the aforementioned gems and level up Nobeta’s stats, such as health, mana, strength, stamina, and intelligence.

Unlike its inspiration, you don’t drop any currency upon death unless you use a gem that has a curse penalty. Even then, you don’t drop it all. Thusly, you’ll frequently be leveling up even if you find yourself dying all the time. And you’re probably going to, as you’d imagine. Since healing isn’t advised, enemies don’t tend to do massive amounts of damage individually but they will gank you mercilessly. 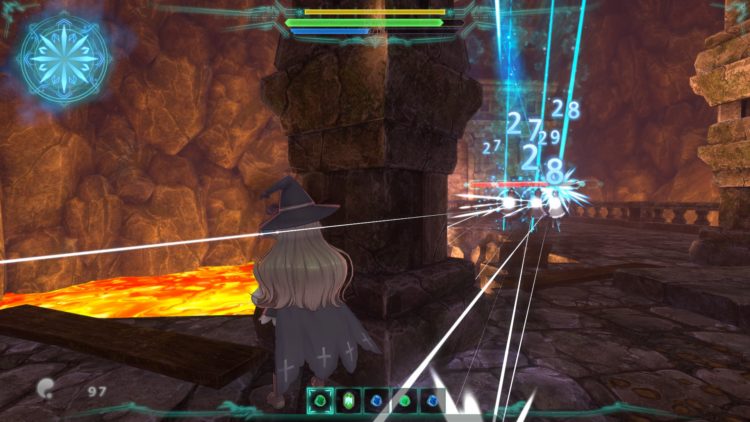 Each stage in Little Witch Nobeta culminates in a boss battle. These can be fairly tough and are one of the things I like least about the game. Nobeta has a fairly standard mana bar but bosses take a good amount of punishment. This means that you’re going to run out of mana while fighting them which recharges very slowly. So you’ll need to get in their face and melee them or use a counter to get your mana back up, but this is pretty risky, especially considering how little damage melee attacks do.  While this is novel, I don’t find it enjoyable.

Interestingly, the invincibility frames associated with dodging work a little differently in Little Witch Nobeta. You don’t get many per dodge, but incorrectly dodging certain attacks will give you a bit of leeway where the attack will still damage you, but it’ll be reduced and you won’t get staggered. Otherwise, getting hit by some attacks means you’re almost certain to get hit by the follow-ups. The second boss is kind of egregious with this, as it has this weird delayed burst attack that then fires off a volley of powerful magic shots. Granted, they won’t take long at all after a little practice, but they could still use some work. 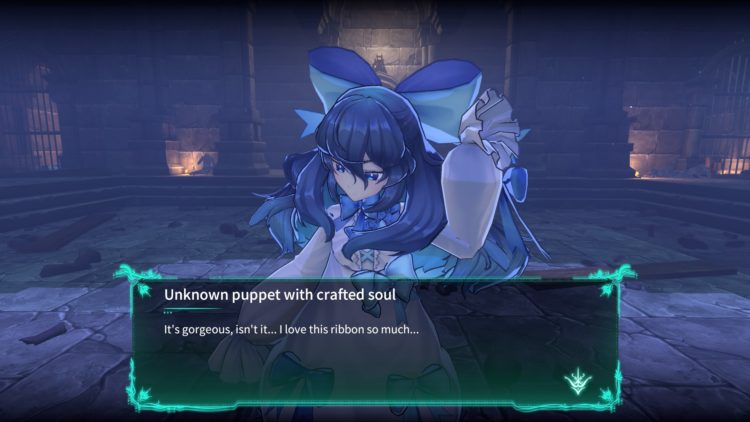 Overall, I’m impressed by Little Witch Nobeta. The combat is satisfying, it’s rather unique and keeps you on your toes, and it puts a neat spin on the subgenre. The visuals for the levels can be a bit uninteresting. There are a lot of stone castle walls to see, plus the lava looks like it came from the ’90s, but the level design itself is fine. It’s generally pretty easy to find your bearings and navigate, plus shortcuts get unlocked that make moving between areas pretty simple. The aiming controls via controller could use some tweaking, as it feels too floaty and imprecise, plus the lock-on simply makes your un-aimed shots miss much of the time.

I’m very curious to see the game’s final three stages once they’re completed. While it only has the first three and likely won’t take most players more than four hours or so to get through, the game is also only $10 USD right now, which I think is a very fair price for what you get. Either way, Little Witch Nobeta is well worth keeping an eye on. 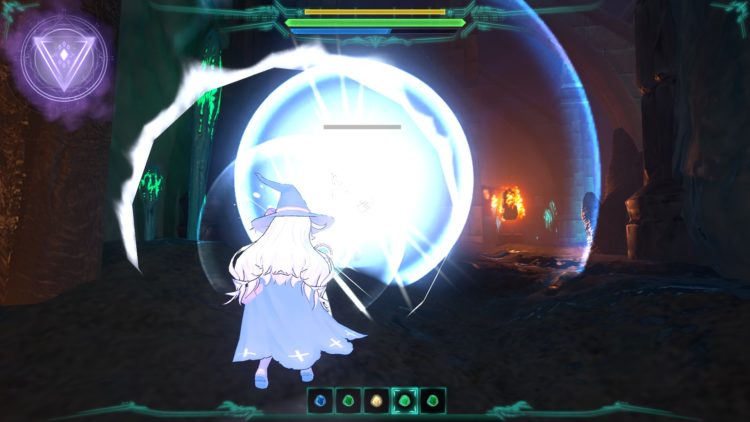 Teppen: Adventures of a Tiny Hero: How the Felyne set will affect the meta

By Steve Clist47 mins ago
Features