“I’m gonna fist my ass with your head,” screams the American football zombie, shoulder pads and helmet doing nothing to cover his mangled corpse.

“What the dick!? Gross!” replies our heroine, Juliet Starling, chainsaw dripping with blood, short skirt barely covering her underwear, the decapitated head of boyfriend Nick dangling at her waist.

Twenty seconds later and American football zombie is dead, cut in two down the middle in a sea of violence and comic gore. Juliet flashes her underwear another fifteen or twenty times to make sure we’re still interested, pops another lollipop suggestively into her mouth and prepares to take on the next boss. The zombie drummer riding through the sky in a magical Viking ship had better be ready, Juliet’s bringing her ‘A’ game. A, as in ass. 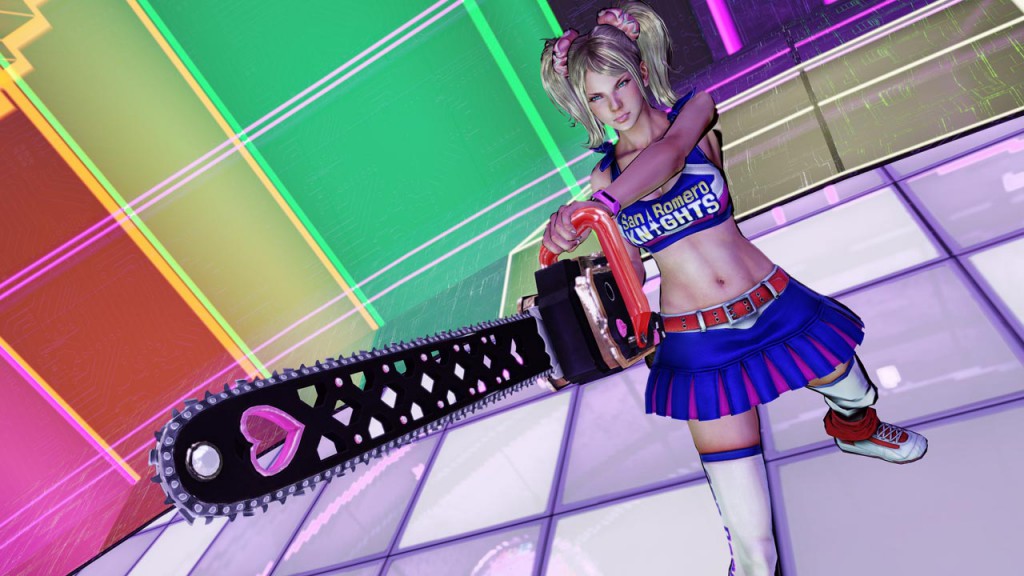 And so goes Lollipop Chainsaw, one of the most ridiculous, crude, potentially offensive and overtly gratuitous games of the past… forever. I like it. I like it a lot.

Take the gameplay in isolation and Lollipop Chainsaw is average at best, a mish-mash of ideas so inconsistent in their design and execution that it’s difficult to take it seriously and more difficult to love it based on a breakdown of solely the mechanics. The core hack ‘n’ slash combat is a mere shadow of the kind provided in the likes of Bayonetta or God of War, unable to match either of those games on either a complexity, satisfaction or graphical level.

But that’s missing the point. To take the gameplay in isolation is to do Lollipop Chainsaw a major disservice. As much as anything this is a collage, a work in which auteur-extraordinaire Suda 51 has simply decided to throw everything on his palette at the canvas. Individually, some of what has been thrown doesn’t work. The collective result, however, does work.

Every dodgy gameplay moment is offset by the fact that it’s simply unlike anything else you’ve ever played before. Every awkward camera angle is made bearable thanks to the ridiculous dialogue. Every (frequent) example of graphical clipping is fine… because you’re playing as a girl with a giant chainsaw and a decapitated head for a boyfriend. The small mistakes almost make it better, adding to the bizarre nature of what’s going on. 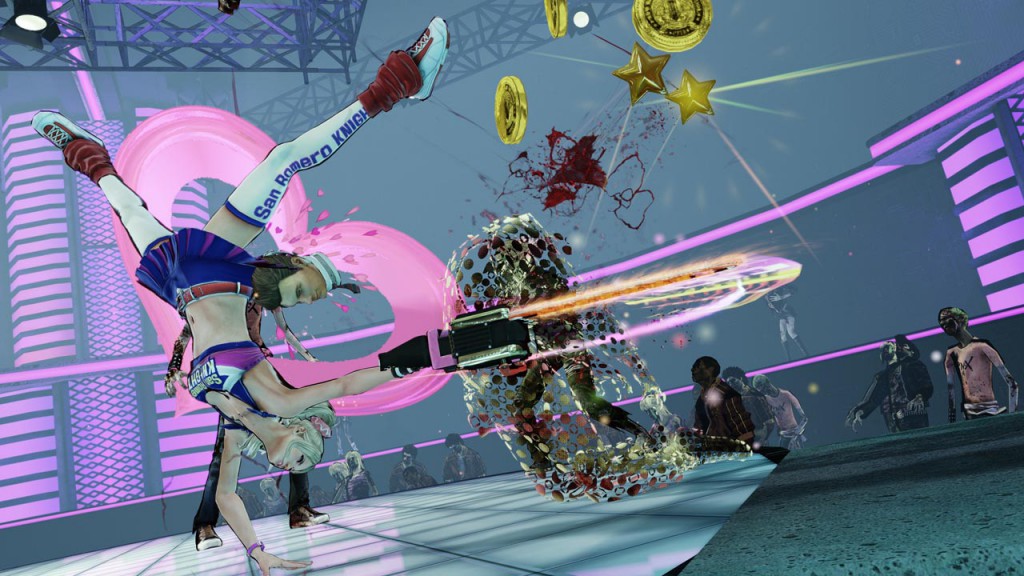 If you can’t see the simple, shameless joy in such things then I’m sorry, but you need to take things a little less seriously. Lollipop Chainsaw is the embodiment of the indie gross out comedy movie in videogame form (something not all that surprising considering James Gunn’s involvement). We praise the film industry for its ability to deliver such products, so why not level the same positivity at videogames?

Lollipop Chainsaw is a beautiful reminder of a time when games took themselves less seriously, of a time when studios and publishers were less bothered about making sure that every chair looks perfectly realistic and every mouth moves with the correct number of wrinkles. Instead, what we’ve got here is a game designed simply around one idea: fun.

Sometimes, fun can be silly and silly can be fun.

The game’s addictiveness is helped enormously by the fact that (on normal difficulty) it’s not overly difficult, zombies being able to take a decent amount of damage but posing little threat to your health bar – so long as you make good use of your ability to dodge. This allows you to concentrate on the visual and aural craziness, as well as preventing stints between mini-games getting too long.

Mini-games exist on each of the game’s few levels – I won’t say how many levels, as that could be considered a spoiler in this case – and are usually unique, one-off affairs that you’ll never see repeated. These include having to chop zombies heads off and send them through a basketball hoop, killing zombies with a baseball gun in a stadium, grinding up zombies with a combine harvester and recurring QTE-based sequences in which Nick’s head is attached to a headless body so that he can use his strength to break down an obstacle to big for Juliet. And that’s not to mention “re-imaginings” of a number of classic 80s arcade games, but I’ll refrain from mentioning which so as not to lessen their impact. 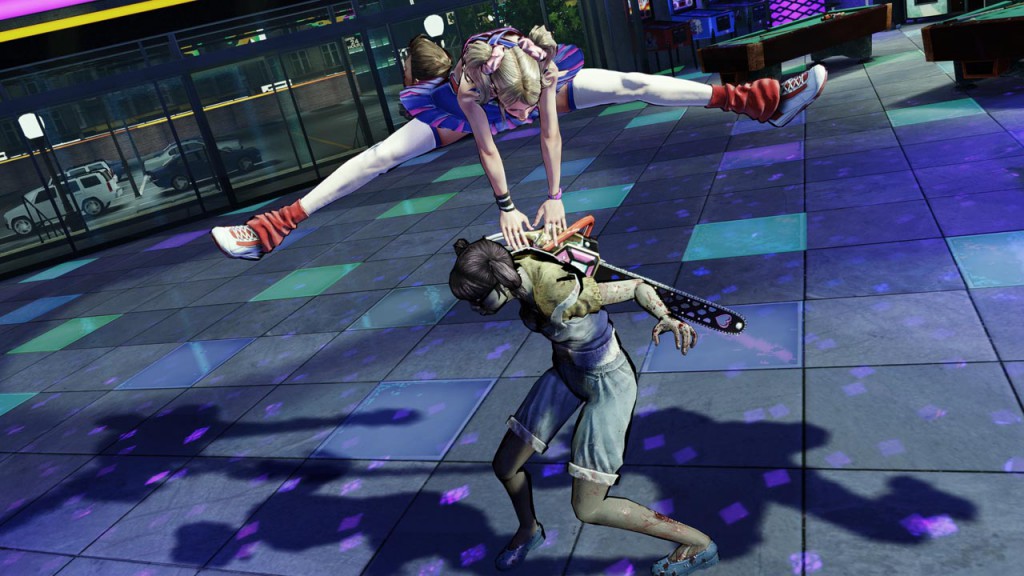 Thanks in part to the mini-games, that first time through Lollipop Chainsaw is never dull and never lacking for personality. While it’s certainly the case that the principle gameplay of fighting zombies in closed off areas is not quite strong enough to warrant a full game in and of itself, that’s a moot point because there’s so much more on offer that does a brilliant job of adding variety and a genuine sense of curiosity in regards to what’s coming next.

Seriously, those that have marked this game down because of the fact that the combat is not as good as the competition have completely missed the point and have become caught up on a single aspect of a game so full of aspects.

Whatever the case, Lollipop Chainsaw is some experience and a brilliant reminder of what a videogame can be when a designer allows an imagination to run wild; bulldozing through anyone who stands in their way. Not everything works, but that’s almost the point; the haphazard nature of the gameplay adds to the crazy, whacked-out essence that Lollipop Chainsaw is so desperately trying to convey.

Suda 51 has once again proven that, like so much cinema, TV and music the ‘so bad that it’s good’ flavour really can work in the world of face buttons and analogue sticks. It works especially well when you put a blond, 18 year-old, chainsaw-packing cheerleader centre stage.