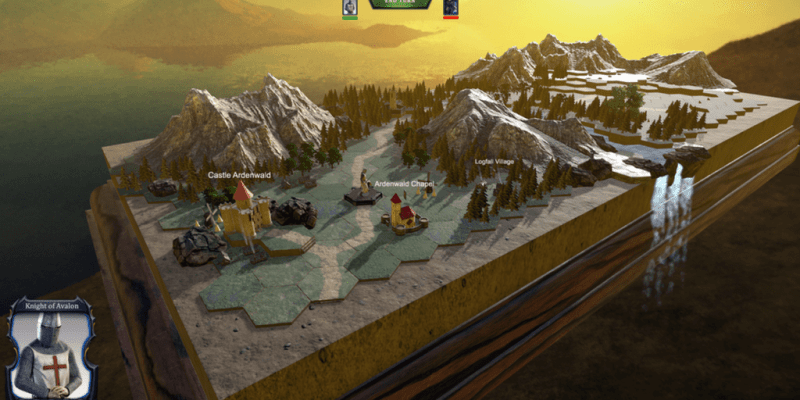 StarDrive creator Daniel DiCicco is turning his hand to tabletop tactics and virtual miniature collection with Longsword. To find out more about the game, and its ongoing Kickstarter campaign to raise $20,000 USD, we sent over some questions. Read on for DiCicco’s innovative ideas for Steamworks integration, how he intends to balance the online matches, and future plans for the title that expand beyond this initial Kickstarter drive.

PC Invasion: The Kickstarter page pretty thoroughly explains what Longsword will be, but for those reading about it for the first time here could you provide the synopsis?

Daniel DiCicco: Longsword is a game of digital tabletop miniatures featuring turn-based combat on a “tabletop” made out of hex tiles. In essence, it’s the board game Heroscape brought to life on PC but with a more mature ruleset. The game is built around the aesthetic of tabletop gaming, allowing you to “paint” your miniatures, rebase them on custom unit bases, built gaming tables, and collect an army.

PCI: You talk in the Kickstarter video about enjoying plenty of physical tabletop tactics games, do you have any particular favourites from which Longsword’s rule set will draw inspiration?

DD: Beyond Heroscape, I am heavily influenced by games where characters use Action Points to move and to activate skills and attacks. This forms the basis of our ruleset, and then we layer on content with hundreds of skills and emergent interactions.

PCI: It looks like you have a mechanically near-complete build of the game up and running. What is the $20,000 you’re looking to raise going to be spent on?

DD: Art, art, and more art. There are a lot of ways to stretch dollars in video game development, but there is no shortcut to creating original art. I’m working with several excellent 3D artists right now and the lion’s share of these funds will be spent to keep them busy.

I also intend to reserve a portion of the funds to pursue bringing in more players. It’s important to the health of a competitive game that it’s got players. I’m ultimately giving the base game away for free because I want people to come and just play it. But for all of that, I need people to know that Longsword exists! So part of the funds are intended to help create a healthy audience so that a good game can be had any time of the day.

PCI: You’ve described online combat as the heart of Longsword. What kind of server structure do you plan to use for the game?

DD: We are integrating with Steamworks in a way that I think is entirely unique. Many games use Steam’s Inventory Service but I don’t think any collectible game has placed its entire inventory on Steam’s cloud. And that is exactly what we’re doing – when you open a pack of cards, that card goes into your Steam Inventory. You can trade it for anything on Steam. It’s a valuable and secure commodity, and Steam has robust security measures to prevent people from hacking or spoofing ownership of these items.

So without getting into the weeds on it, I can say that the game and its communication framework lives on the cloud. Players won’t be setting up their own servers or anything like that. Everyone logs in to a central social area to organize their games, while Steam handles authentication and economy management on the cloud.

PCI: Since you’re opting for a free-to-play model, and cards can be purchased with real money, what steps are you taking to prevent those with larger disposable incomes having a permanent advantage in battle?

DD: Longsword is like Chess in that it is deterministic, and as a result tactical thinkers will generally be able to overcome lesser players even if they have a “better” deck. But generally I try to avoid making the rarer cards better than a common card; instead rarer cards tend to open up a larger possibility space, offering some opportunities and combinations that might be more flavorful but not necessarily more powerful.

But ultimately I strongly believe that skills wins games of Longsword and that when people get their hands on it, they’ll see that even the starter decks are extremely competitive when played well.

PCI: Is there a possibility of an asynchronous play mode for online games (equivalent to the sort of online-play-by-mail structure used by Slitherine)?

DD: Well, I have a method to quickly and easily serialize the game state to a binary file. While I don’t have specific plans to allow players to email them back and forth, it would be pretty easy to do it. If players want this then there’s no problem with on my end. Honestly it’s a pretty good idea. You could log in and make all your asynchronous moves before looking for a synchronous game. We wouldn’t even need to use email; once again, Steam’s got a back-end that could handle that. Alright so maybe we’ll do that. Thanks, Peter!

PCI: Roughly what portion of Longsword will be playable solo or co-op on launch?

DD: Well, 100%. You can play Solo Campaigns against the AI right now, and you can also play Skirmish matches solo. When we do the official Steam launch, we’ll have 7 unique Solo Adventure campaigns and at least one Co-op campaign designed for 2 players vs. the AI.

PCI: If some cards are tradeable through the Steam inventory system, does this mean the ‘regular’ trading cards which drop for Longsword could conceivably also be in-game cards/units?

DD: Actually, that’s another good idea. I’m not sure if Steam has a method for checking and verifying ownership of those cards. The back-end system on them I think is a bit different. But I’ll look into it! Could be fun.

PCI: You’ve got plans to include Steam Workshop support and a map creator. Is there scope within that map editor for creating different, maybe more experimental, multiplayer modes too?

DD: Not yet. Modifying the rules of the game is likely outside the scope of my provided tools. I have a hard enough time modifying the rules on this end with full source code. But it is my intent to personally create a number of experimental modes and special rules, and mapmakers will have access to the exact same tools that I use to make maps and campaigns. So for example when we might add Zombies vs. Survivors tileset and play set, there could be some special rules put in place to create some specific scenarios that I want to play. Once the rules are in the game, the tools will be available for other modders to use.

PCI: There’s a complaint among some players of the StarDrive titles that you’ve left these games unfinished. Can you address that, with regard to promises of long term support for Longsword?

DD: I’m proud of the StarDrive titles and I know that a lot of people really enjoyed their time with my previous games, including and perhaps especially those people who are upset that development is done on StarDrive. To all of my fans, I can only say that the proof will be in the pudding, and the pudding is free. If you’re unsure about Longsword, then wait! Get the game for free. But if you believe in me and liked my previous titles, then I think you know that I can make a really cool game on what amounts to a shoe-string budget. You can already see how cool it looks. With some help from the community I can make something really special here.

PCI: Long-term you’ve raised the idea of different tilesets supported by new sets of cards (sci-fi themed, etc). Is there also the functionality for these new ‘genres’ to have their own distinct sets of rules?

DD: Absolutely. The commonality will always be the tabletop, your miniatures, your customization options. But as we add new play sets I want to add new experiences rather than new skins to the game.

PCI: With every crowdfunding effort there’s a chance of failure; what is the plan b for Longsword if funding doesn’t come through?

DD: Hunker down, get it done, spend savings, things like that. I believe in the game and I’ve put a lot of time and personal funds into it already, and even if funding fails here then I won’t lose heart. I’ll probably have a sorrowful drink or two, but if this fails to fund then I’ll wake up and be working on Longsword the very next day.

Ultimately I mean what I say about this being a very long-term plan. I know that people will play this game because the value that I am offering for free is excellent. I hope that means that people will want to support the game by buying paid content. It’s my expectation that we may struggle to break even for a long while, but that if we persevere, then we’re going to build a large and dedicated community of tabletop gamers playing Longsword every day.

The ongoing Longsword Kickstarter campaign can be found here.

Secret World Legends out now, on Steam in July