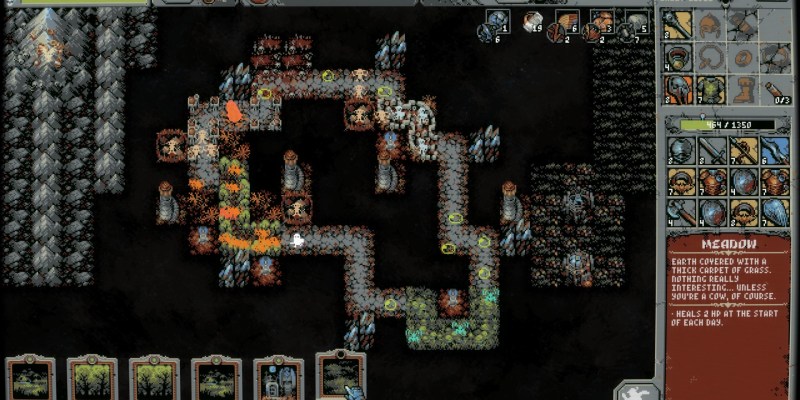 Time is cyclical. No matter what happens on a daily basis, you can always depend on the sun rising in the morning and setting in the evening. Like it or not, life is just an infinite loop, with a series of similar-looking offramps scattered throughout the trip. The never-ending, ceaseless nature of life steps into the spotlight in the freshly released Loop Hero. Despite having only previewed it a little over a month ago, I was pleasantly surprised to see that the final release was just as intoxicating and addicting as the first taste. Are you the person who finally has what it takes to finally break the cycle?

The world of Loop Hero is an admittedly weird place to exist. The main protagonist suffers from a strong case of amnesia, and the earth itself was nuked back to the stone age with very few identifying characteristics remaining. It turns out that The Lich has decided to deprive humanity of everything that they hold dear, resulting in a scorched husk of a planet as far as the eye can see. All that remains is a path that has been etched into the ground, providing players with the game’s one definitive piece of guidance: follow the path.

Before you ask, no, this isn’t some crazy religious cult. In fact, Loop Hero has more in common with the occult than anything divine. The one thing you can depend on is that there will be a procedurally generated path to follow upon starting each chapter. Aside from that, virtually all other aspects of the gameplay will vary, depending upon the strategies being utilized during the most recent trek. Let’s just say that when a game can be classified as either a deck builder, strategy, or rogue-lite, there’s quite a bit of variation possible.

As I alluded to earlier, the expedition/adventure gameplay is dependent upon you following the predefined path and grinding to enhance gear and abilities. During each adventure, the protagonist saunters along the trail, throwing down with any adversaries that impede progression. In a traditional action-strategy game, the player would normally have direct control of all combat decisions. In this case, however, once a conflict has kicked off, that is when your control comes to a screeching halt. 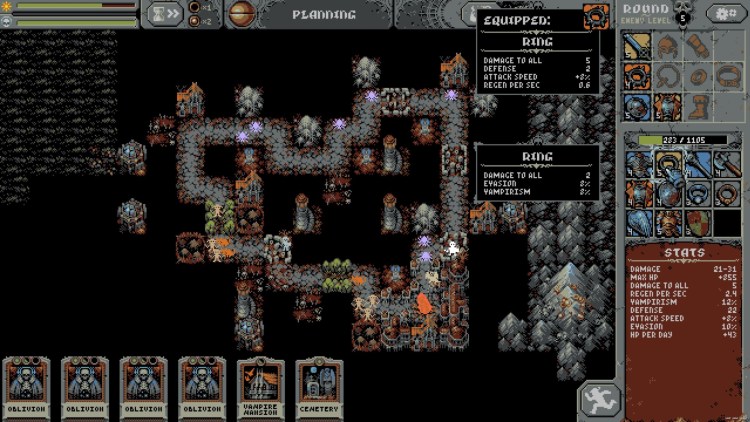 Each skirmish plays out with you as a glorified spectator. Depending upon the stats of your character, the items you’ve equipped, and the tiles that are deployed on the map, brawls are completely self-sufficient. Luckily, the AI guidance seems more than capable of keeping the action fair and balanced. Throughout my time with the campaign, there were only a handful of junctures where adversaries were attacked in what I deemed to be an illogical order. Rest assured that, despite lacking direct player involvement due to the AI’s consistently predictable behaviors, you never feel completely out of the driver’s seat.

Enemies can take a wide variety of different forms, further evolving during each chapter. After the umpteenth time being aggressively shooed away with a sharp weapon, foes will eventually morph into either stronger versions of themselves or whole new creatures entirely. For every trip around the horn, competitors will also grow progressively more difficult to dispatch. This constant drive to improve your abilities is why it’s so critical to continuously keep pushing forward. 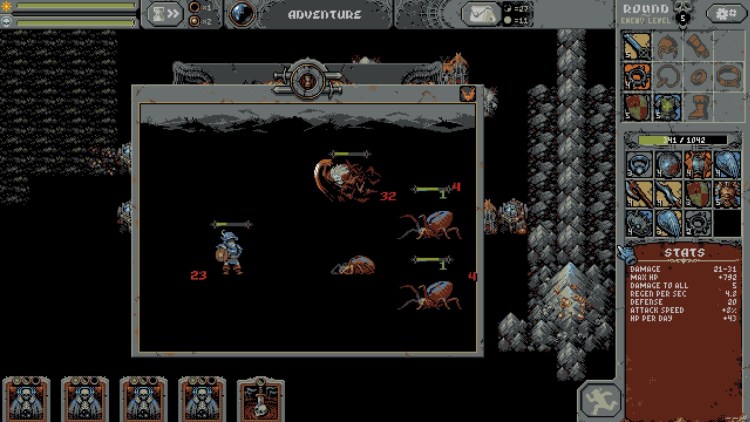 After each successful battle, gear and environmental tiles will fall from the heavens. These newly acquired pieces of armor, weapons, and support objects all enhance your combat capabilities if utilized carefully. Unfortunately, these drops also run the chance of railroading all progress otherwise. It takes some time before you’ll grow accustomed to the different types of loot, but it won’t take long before making the “proper” choices becomes virtually second nature. But don’t waste much time, because there’s only room to hold 12 different items and a rolling handful of environmental tiles. Just be aware that, if something falls off of either list, they are gone forever.

While new equipment tends to have a very straightforward impact on a character’s stats, the environmental tiles are a whole different kettle of fish entirely. Loop Hero’s tiles can be applied to a singular grid position on the map, which has a diverse impact on the layout and flow of each trek around the loop. Attaching these materials effectively can lead to a fundamental shift in how each stage flows. 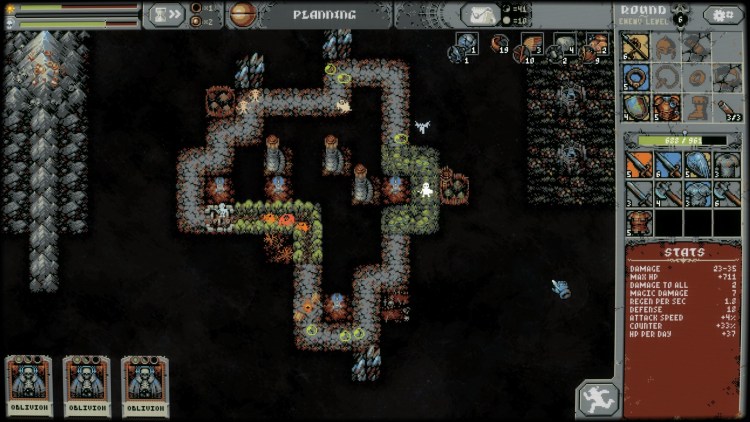 For example, if you were to lay down a swamp tile, suddenly that location is transformed into marshland. Some of the new characteristics that come into play can cause a tectonic shift in tactics. When performing healing actions while still in the swamp (armor regeneration included), health will actually be deducted as opposed to improved. Plus, just to add a little insult to injury, mosquitos will also spawn in swamps every three days. But on the bright side, with more enemies present on the map, at least there are increased opportunities for lucrative drops.

Other tiles available early on in the campaign include cemeteries, which spawn additional skeletons. There are also forests, which include the trade-off of spawning rabid wildlife, but yield additional resources with every pass. There are even items that don’t have any tangible downside, like the mountains and rocks. These tiles can be mixed in any combination of 3×3 grid to create a mountain range, which simultaneously boosts health by a whopping 125 hit points. There’s even a secondary modifier that adds additional health for all rock-type tiles, placed directly adjacent to any mountain ranges. 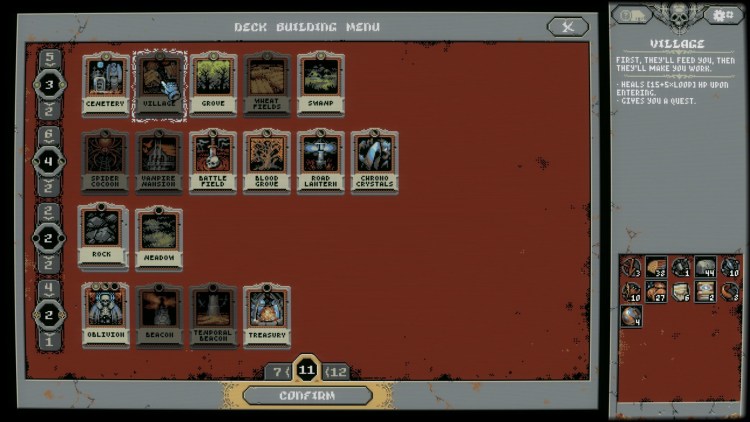 These sorts of combinations are just the tip of the iceberg, as new tile varieties are unlocked by upgrading your village. In case you hadn’t caught on, during each round of Loop Hero, you’ll be continuously gathering resources used to enhance your settlements. If you were to leave the map, mid round, you’d be sacrificing a whopping 30% of all gathered resources. As an interesting counterpoint, if you were to die in the course of a battle, you only keep 30% of the spoils. The last option is to abandon ship when standing directly on the campfire tile, which allows for your full complement of items to be returned to the village.

Life is a Lich

The other key factor at play is that pesky Lich. As you add more tiles to modify the map, there is a rolling status bar in the upper left corner of the screen that indicates when the cheeky little bastard will make his next appearance. Unless you’ve enhanced your character something fierce, the outcome of facing off with The Lich is unlikely to be a positive one. However, if you somehow manage to limp on to the next chapter successfully, new gear and environmental items await. 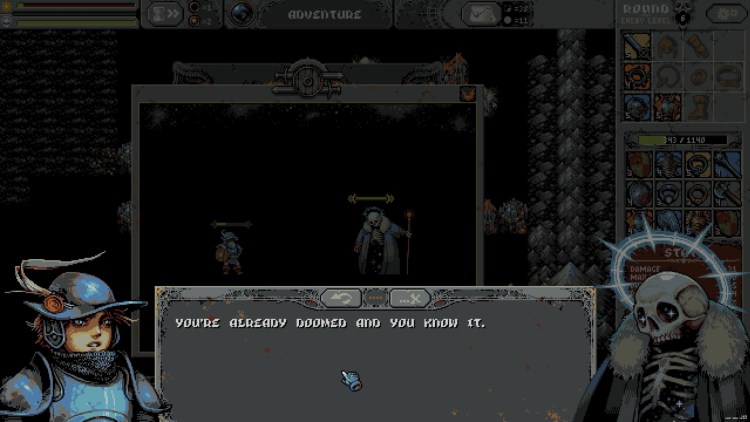 If you couldn’t tell, I have a very strong affection for Loop Hero’s gameplay, well, loop. Despite having a very limited presentation layer, there are numerous complex systems residing just below the surface. Later chapters continue to build on this inherent complexity, while still somehow managing to keep the action approachable. Now if only they had a more comprehensive overview of each item and how they can be combined to maximize benefits. Sadly, as far as I could tell, the only way to figure out successful item layering is through continuous trial and error.

Fortunately, I was so shamelessly hooked by the gameplay of Loop Hero that it provided me plenty of opportunities for experimentation. It didn’t take long until I had a sustainable strategy that enabled me to thrive. The problem was, even these small successes helped reinforce my addiction even further. Considering the number of consecutive nights my wife went to bed before me while I sank even more hours into the campaign, I’m pretty sure we could qualify as being legally separated.

Aside from the obvious lack of thorough documentation, Loop Hero resonated with me more than any game I played across all of 2020 and early 2021. Seriously. It’s that damn good. Honestly, I don’t know why you’re reading this instead of playing it now. You can thank me later. In the meantime, I’m going to keep walking the road less traveled and kicking ass every step of the way.

Life can be a Lich. Find out if you have what it takes to break the cycle of destruction and return earth to normalcy in our Loop Hero review!
9

Thought it seems simplistic at first, it doesn't take long to see the true depth of Loop Hero. Thanks to its very approachable design and killer gameplay hook, this is the kind of addicting and engrossing experience that can steal whole weeks from your life. Just don't say we didn't warn you!