Lucius 2 is not a good game. In fact, by basically any metric, it’s actually a bad game. It’s shonky and buggy and unfinished and about as well-polished as a mirror that’s been locked in an attic for the past hundred years. It has godawful controls, the wonkiest physics this side of a parallel universe in which things fall upwards, some truly agonising voice acting, typos in basically every other word… I mean, I could pad out this entire article by listing things it does wrong.

This isn’t a full review because I haven’t finished it… but I just had to write something about it because it’s hilarious, and is about as entertaining as setting a pack of lemurs loose in a primary school. 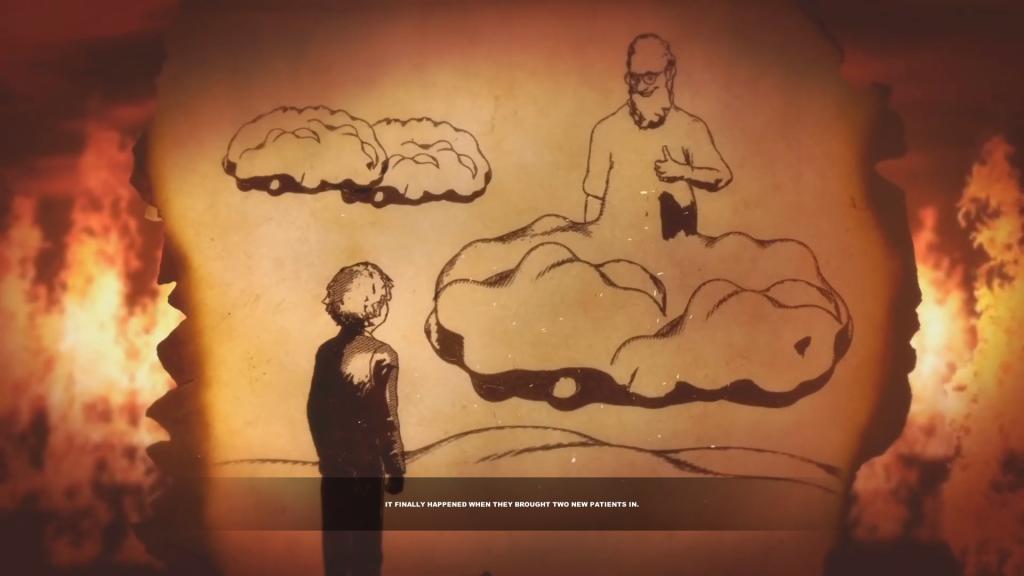 The first Lucius was also a bad game, but that was a bad game that wasn’t fun. It was a videogame version of The Omen: as the son of the devil, you had to wander around a mansion murdering people to please your father and gain all sorts of new demonic powers. It was billed as being a bit like Hitman starring a devil child, but it relied far too much on using psychic powers (and I mean your psychic powers, not Lucius’) to discern exactly how the devs wanted you to murder each victim.

In Lucius 2, that doesn’t happen. You’re given levels full of roaming NPCs, some vague objectives (“kill this person” or “get to this room”) and carte blanche to go about things however you like – which usually means you’ll kill pretty much everyone you can, because A) why not, and B) you get experience for each murder. So no, no pouring water outside to make a slippery path and then unplugging lights to make someone come out and then dropping an icicle on them. 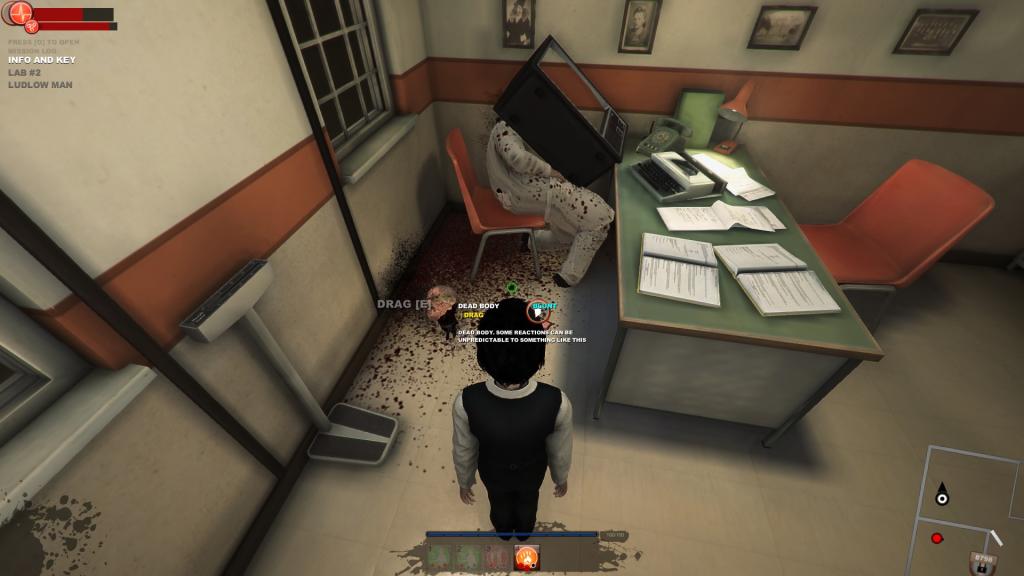 You can, however, drop TVs on people.

It starts off with Lucius in a hospital, because apparently it’s standard procedure to take a kid for psychiatric evaluation after his entire household is killed in brutal accidents and his house in engulfed in flame. Makes sense. He loses his powers, gets locked up, and is basically left dormant until two things happen: a nun appears in the psychiatric ward, and they try to give him electroshock therapy. At this point his powers start to come back, and, uh… well, don’t try to electrocute the son of Lucifer. It won’t end well.

The first five levels of the game, which are all I’m going to talk about here, are set in the hospital as Lucius tries to learn what’s going on, make his escape, and murder everyone in the building.

Lucius 2 tries its hardest to be emergent, with basically every single item having individual properties. Some – wallets, doughnuts, and the like – will attract people to them. Some items can be combined, like doughnuts and pills, to create other items. Items are activated by electricity, or dish it out. Items are fragile or strong. They’re flammable, or explosive, or blunt, or none of the above. The idea is that you’ll combine these in intricate ways, leading people to your carefully orchestrated deathtrap and then snapping it shut on their face. People themselves have Suspicion and Panic which affect their actions, and you can modify these by, say, dragging corpses towards them. Emergence! 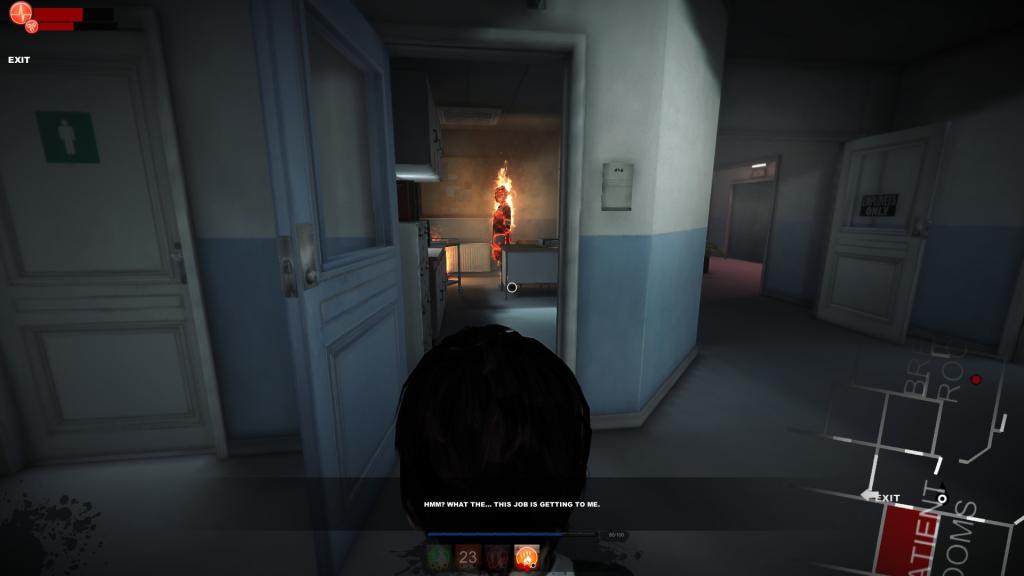 Yeah, you’re looking a bit hot under the collar there.

It’s fun, but this emergence is nonetheless hampered by… well, basically the entirety of the game design.

Let’s say you want to kill somebody by electrocuting them to death. There’s a defibrillator nearby, and you’ve got a nice big jug of water you can pour all over the floor. You’ve also got a wallet you can drop in the water to lead them over there. Easy kill, right?

Well, first, Lucius doesn’t do anything normal like “carry things with his bare hands”. If you pull an object out of your inventory it floats next to Lucius’ head, which is a really good way of attracting attention. Come on, Lucius, you have hands. Use them. 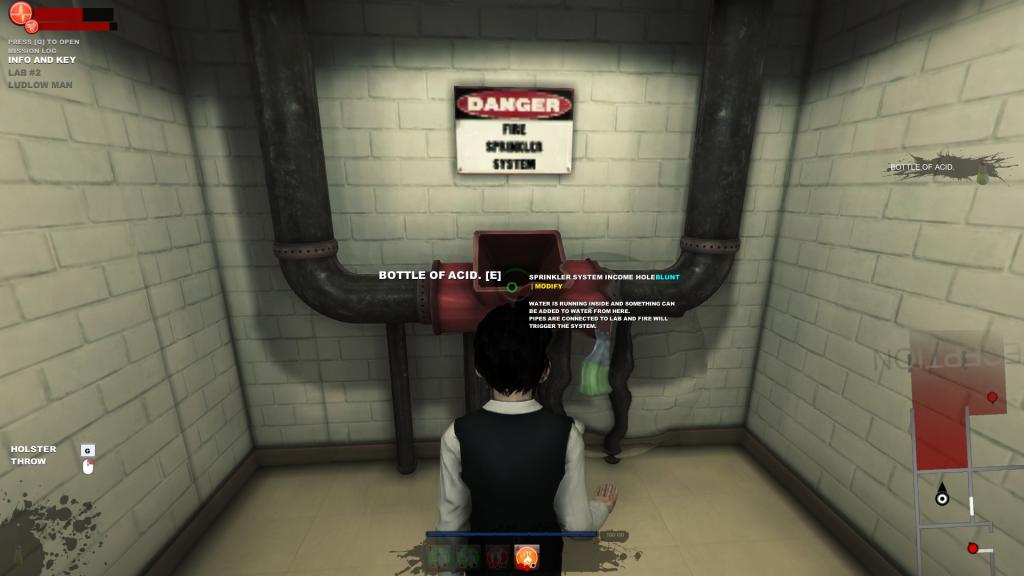 Not quite what I meant by “use your hands.”

Secondly, actually pouring out that liquid is a little… uncertain. The liquid just sort of appears on the floor, and because I’m normally trying to create a big patch by walking around, I’m never quite sure whether or not it’s dropping at Lucius’ feet or if it’s slightly to the right, where the jug actually is. Not a big problem unless you’re trying to be precise… which you might be, if you have a very limited amount or if you’re trying to use one of the other liquids (like slippery stuff, which sends people flying). 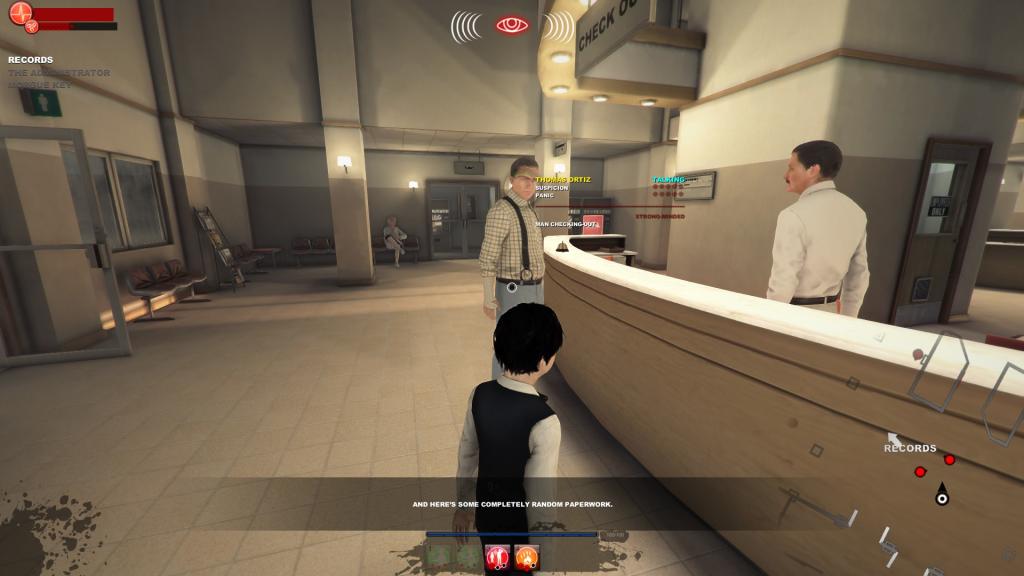 Well… the defibrillator paddle is attached by a cord, and that means it won’t exactly land where you place it, so it’ll probably take a few attempts to get it into the puddle (depending on the puddle’s size). And even when it’s in the puddle you still have to move away without accidentally nudging either the paddle or the defibrillator, which is quite hard, both because the corridors are quite narrow and because Lucius apparently has the gravitational pull of a small planet. Move near an object and it will begin to orbit creepily around him.

After that, though, you at least only need to throw or drop the wallet into the puddle and then activate the defibrillator. Without nudging it, again.

So yes, that’s a bit cack, and at one point I spent (literally) five minutes trying to carefully aim a gas canister I was going to fire at someone’s face, without nudging it away from the target. 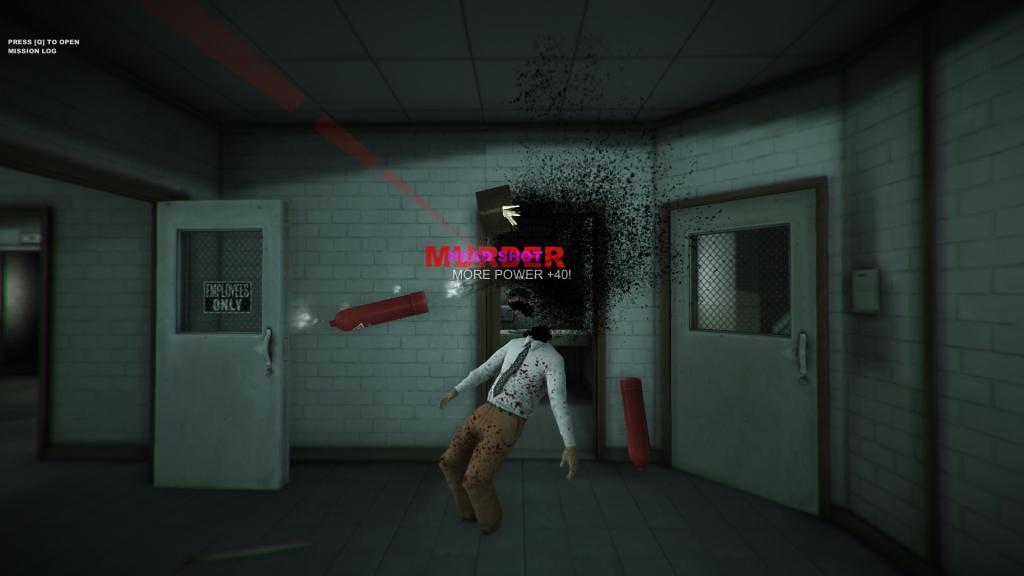 The result was totally worth it, though.

But! That’s only part of it, because there are all sorts of other creative means of murder, some of which are completely absurd. Like when I came across some surgeons performing heart surgery and I swapped out the blood bag in the IV for a poisoned blood bag, which made the patient explode into acid blood that immediately killed everyone in the room. Or the time I fiddled with an anaesthesia machine, killing a bed-ridden patient, and a doctor who came across the scene was apparently so distraught by a dead person in a hospital bed that he flung himself out the window. Because that’s how doctors work. 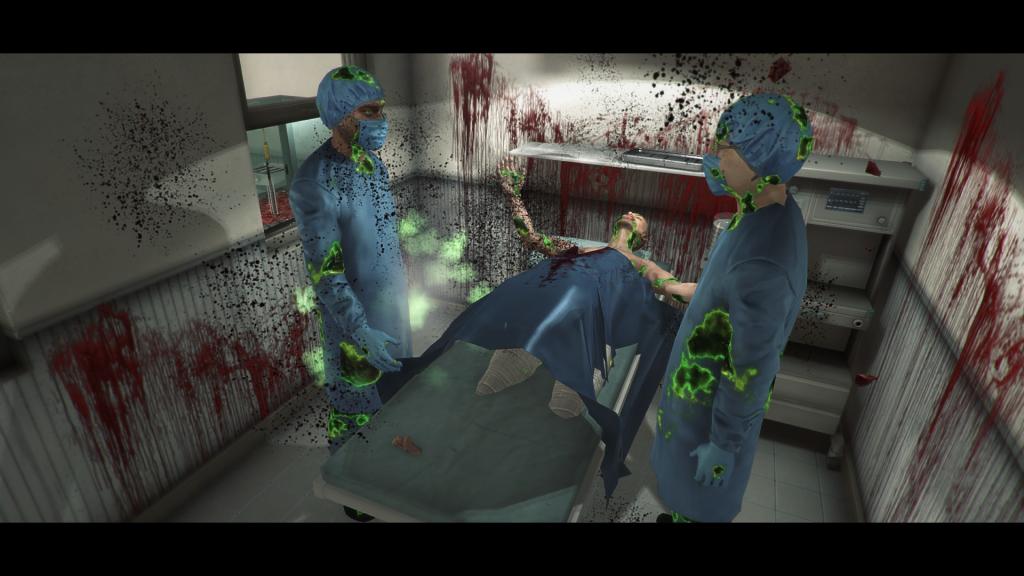 Remember, kids: adding a poisoned blood bag to an operation results in people’s legs clipping through the gurney, the sheet levitating, and the person exploding into acid gore.

Most of the “main” victims in the level – specific targets, or people carrying keys that Lucius needs – can usually be murderised in a few elaborate ways. I mean, you can just walk around poisoning coffee pots or lobbing vials of acid at people, but there are limited supplies of those tools and frankly they’re not nearly as fun as the alternatives. Like dropping a TV set on someone, or assembling a Wile E. Coyote timebomb by strapping an alarm clock to some dynamite.

If that wasn’t indication enough of the game’s mentality, then that’s probably about the time when you’ll walk into a room with two men having sex (and are completely unfazed by a tiny creepy child staring at them), or notice that a patient in the waiting room is called Willie Stroker, and realise that this game doesn’t take itself even remotely seriously. I mean, at no point was I taking it seriously, but I sort of assumed the developers were. I was wrong. 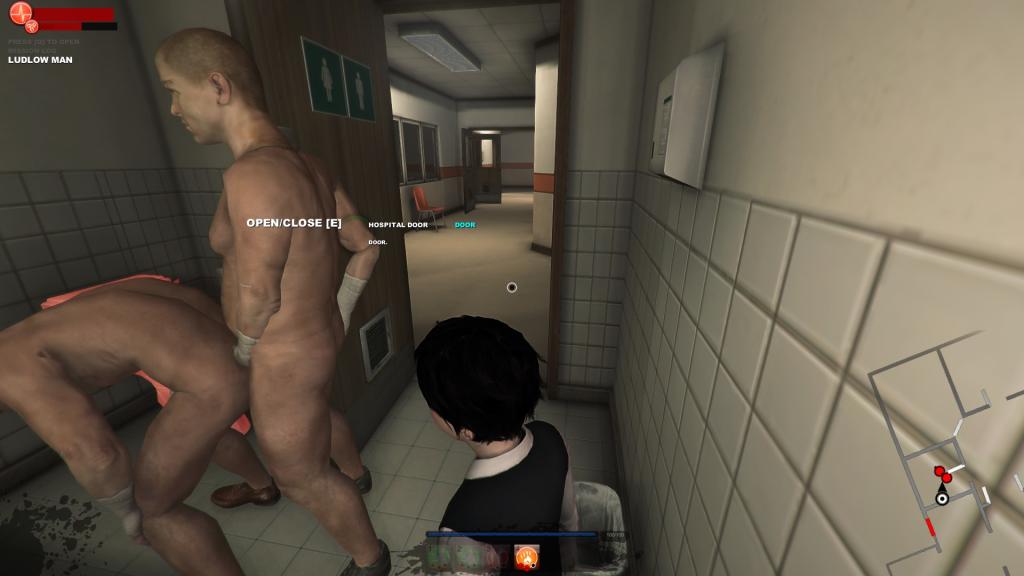 You guys just, uh… you guys just carry on. Don’t mind me. I’ll just stand behind you and stare creepily.

Lucius 2 is gloriously, stupidly insane, and this totally works in its favour. It’s not a good game – it’s really, really not, and I hope I’ve made that clear by now – but that doesn’t mean it’s not entertaining. It’s Hercules in New York, basically; it’s not going to win any awards (barring our year-end Alternative Awards, where it’s probably going to manage a half-dozen) but that doesn’t mean it’s not a really fun way to spend a few hours.

You probably don’t want to pay £14.99 for this, but it’s definitely one to consider when you see it on sale – especially if you’re a fan of brilliant, brilliant rubbish.