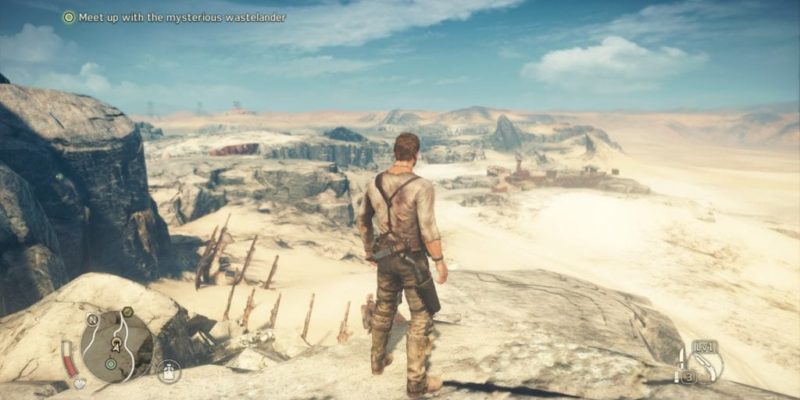 That bead of sweat and twitching eye of panic on the faces of PC players everywhere can only mean one thing; a new Warner Bros. published game approaching our beloved platform. After the Mortal Kombat X gut-punch and the gloomy horror show port that was Batman: Arkham Knight, is Mad Max going to be left out into the PC desert to die?

This version was all done in-house by developers Avalanche, and those who remember their work on the PC version of Just Cause 2 will know that this bodes very well indeed. For lo, it is known in the annals of history that Just Cause 2 looked and ran pretty nicely even on machines fashioned from bits of scrap metal, lollypop sticks and old Airfix model parts.

Quite appropriate for Mad Max, really, given how much scavenging goes on in the game. 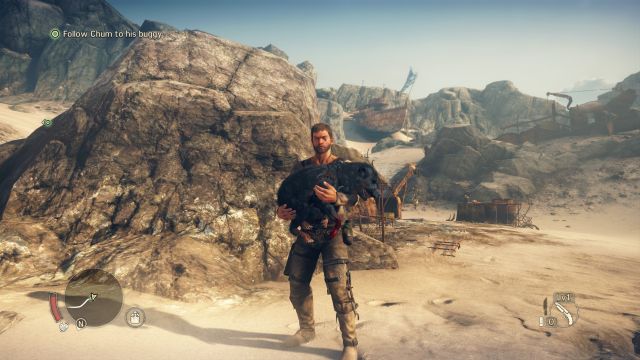 In a surprise twist you actually play as this dog, and Max is your own ‘Magnum Opus’ transport.

My current PC isn’t quite in such dire condition, but it is in need of upgrading. The i3-2100/8GB/2GB 7870 box I’m testing Mad Max on is very much at the “minimum listed specs” end of the spectrum. For added reference, I’m also using the latest 15.8 AMD beta drivers (unlike yesterday for Metal Gear Solid V, when I hadn’t yet installed them).

Those minimum specs might be slightly on the conservative side though, because the PC spelled out above didn’t have much trouble reaching a mostly-consistent 60fps at 1080p after making some graphical compromises.

Speaking of said graphics options, here they are. There are so many in the list, they don’t all fit on one image. That’s already quite promising. 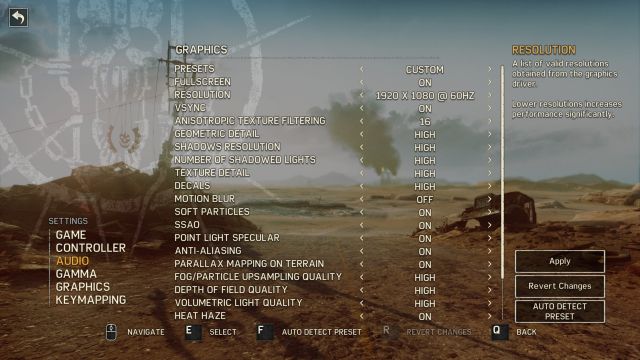 They ALMOST fit on one screenshot. 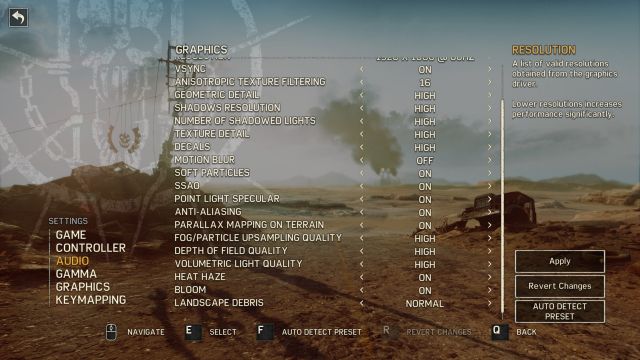 Those settings are close to the default for ‘High’ (though some of the options have about three more tiers beyond High, and others have High as the highest; which makes the name a bit less clear than it might be) with a couple of my own changes. Like Motion Blur being turned off.

The ‘Fullscreen’ toggle includes a Borderless mode, as well as Off. Resolution and Vsync should be fairly self-explanatory.

Here are the tiers in the other settings. Avalanche provides a helpful little description for each one as you hover over it, so if you’re puzzling over ‘Point Light Specular’ it’ll tell you that’s to do with dynamic lights glinting off shiny surfaces. Most settings also indicate whether turning them down will improve performance or “slightly” improve it. Handy stuff.

Number of Shadowed Lights: Off/Normal/High/Very High/Max (a lot of these tiers are not terribly consistent – there’s no Ultra here for example). 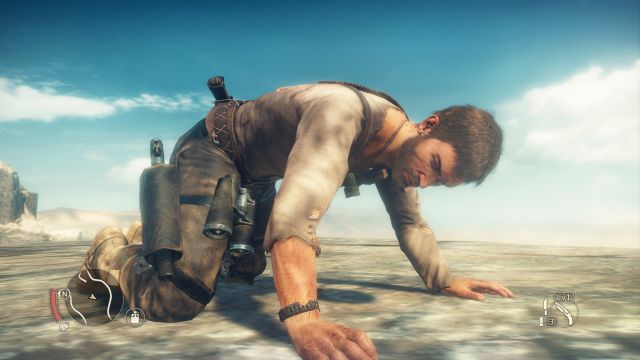 Come on Max, you can make it through to the end of this list.

Phew. So, yes, plenty of things to mess about with in a quest for a solid 60fps or beyond (there’s no FPS cap here). The only obvious thing missing is any distinct AA options, meaning people might want to inject it through their GPU software instead.

Control-wise, Mad Max does well by those who want to use mouse and keyboard. You can rebind your key settings, like so. 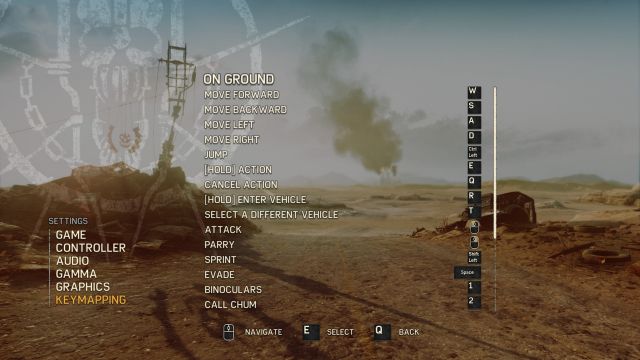 All the keybinding your heart could desire.

And the in-game button prompts are actually correct for the input device you happen to be using at the time (instead of occasionally being a bizarre hybrid, eh MGSV?) Switching between mouse/keys and a controller on the fly also works completely fine. Good news for anybody who, say, fancies doing everything but the driving bits on mouse and keyboard.

The only strangeness I encountered here was the mouse pointer appearing on-screen after completing a mission. But a trip in and out of the pause menu would make it go away again.

My hypothetical wish list would include a bit more control over the UI and HUD. You can turn off ‘Tutorials’ for the more egregious button-prompt pop-up stuff, but I miss the level of control The Witcher 3 gave the player over showing quest-lines and the like. Not a massive issue, and nothing specifically to do with the PC version, but it would’ve been nice to have similar options. 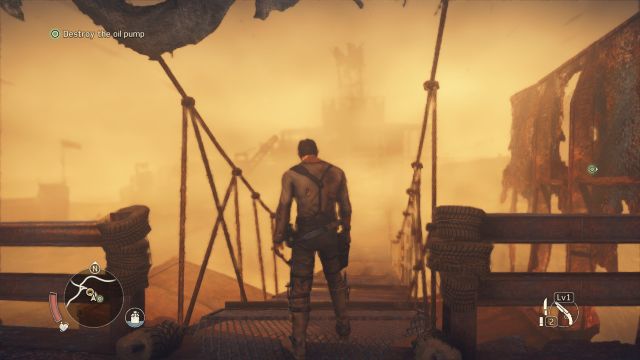 Performance in Mad Max, as I’ve already indicated, was impressive. Default-ish High settings on my pretty old machine were still dishing out 60fps the vast majority of the time. It dipped into the upper 40s during a few moments, mostly when there were large explosions on-screen; but other situations that I expected to be more demanding (multiple cars attacking and blowing up, a massive sand-storm) didn’t really cause drops beyond a frame here and there.

That’s impressive, given that I’m sat near the minimum suggested PC specs, and that the PS4 version is locked to 30fps. It also suggests encouraging things for Just Cause 3, assuming that Avalanche also deal with that PC version in-house. 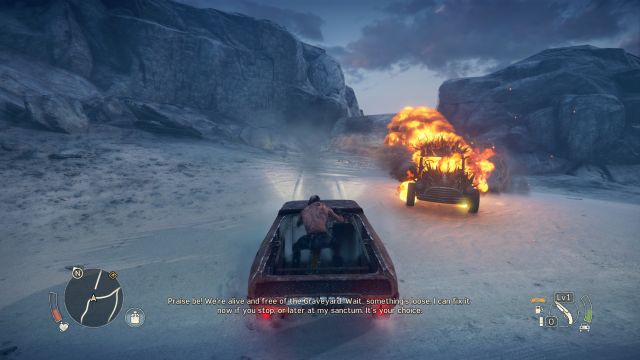 Excuse me sir, you seem to have a minor engine fire.

I’m not terribly far into Mad Max itself (a couple of hours), so it’s entirely possible that more demanding areas might show up. It certainly helps that much of this game’s open world is some variety of barren desert. So far I’ve rescued a dog, heard a lot of pseudo-spiritual prophecy talk, done some Batman combat, taken over an outpost in classic open world style, found some new bits of car, rammed some nutters to death, and performed some death-defying jumps off sand dunes.

There’s plenty more to go before I review this properly, but the rather marvellous job done by Avalanche on the PC version will help make that a smooth ride. At least, as smooth as is possible when I’m driving headlong into sand-storms.