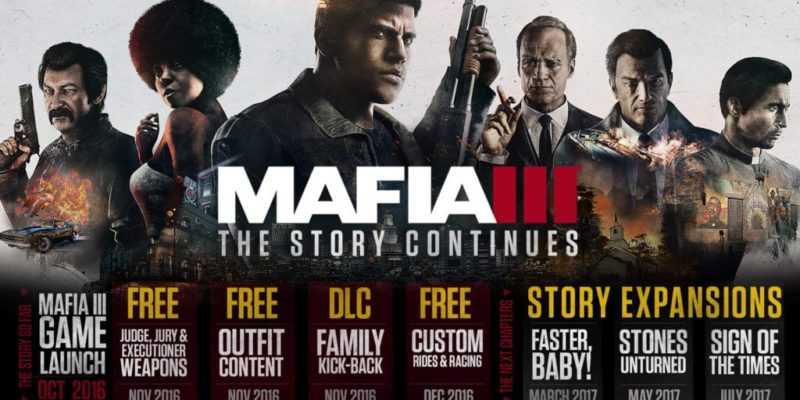 First up will be Faster, Baby at the end of March, then comes Stones Unturned in May, and finally, Sign of the Times in July.

Hangar 13 say they have been listening to the Mafia 3 community’s feedback and Faster, Baby will be “delivering another killer story” with a “tightly-told tale”. A new unseen part of New Bordeaux is also being opened up and they promise “thrilling stunt driving and high octane car chases”.

The upcoming Mafia 3 a DLC is described as follows:

When a merciless rival resurfaces in New Bordeaux, Lincoln must join forces with CIA agent John Donovan to settle a blood feud that began in the war-torn jungles of Vietnam.

A string of ritualistic killings has New Bordeaux on the edge of terror. At Father James’ request, Lincoln agrees to hunt down the cult responsible, a quest that will take him from the dark heart of the old bayou to the drug-ridden counterculture of the inner city.

All three of these story expansions will deliver tight, focused, and compelling narratives, while also introducing new gameplay mechanics, activities, environments and rewards.

Anyone with the Season Pass will get all of the above and they will also eventually be available separately as story expansions.