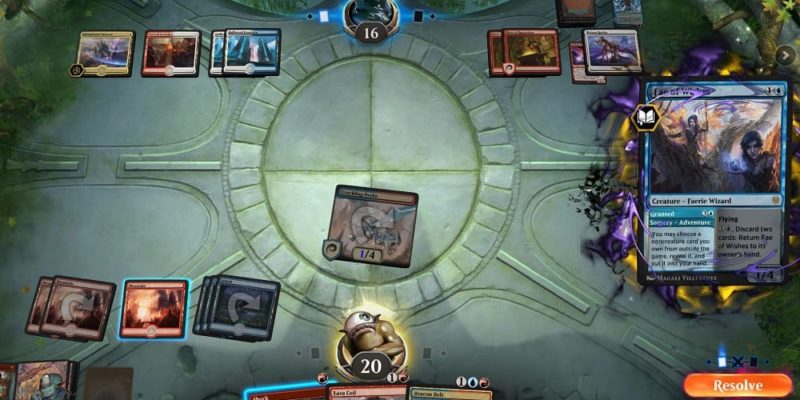 The world’s oldest modern trading card game is the most recent to take the digital CCG scene. Magic: The Gathering Arena is the epicenter for Magic today, allowing players old and new to come together and duke it out with a long list of cards. In this MTG Arena guide, we’re going to show you how to get started.

It’s more accessible than you may think. Although Magic has been around for over 25 years, Arena restricts the card pool to only the most recent sets. That doesn’t mean you can’t be competitive, though. In fact, Arena is the primary way new players can get into the competitive Magic scene.

If that’s what you’re in for, or even just for casual play, MTG Arena is for you. We’re going to walk you through getting started and ensuring that you’re set up to get the most out of the game.

Keeping up to date with the new events on the MTG Arena page will help you to know which formats are available to play and what, if any, exclusive rewards are up for grabs. 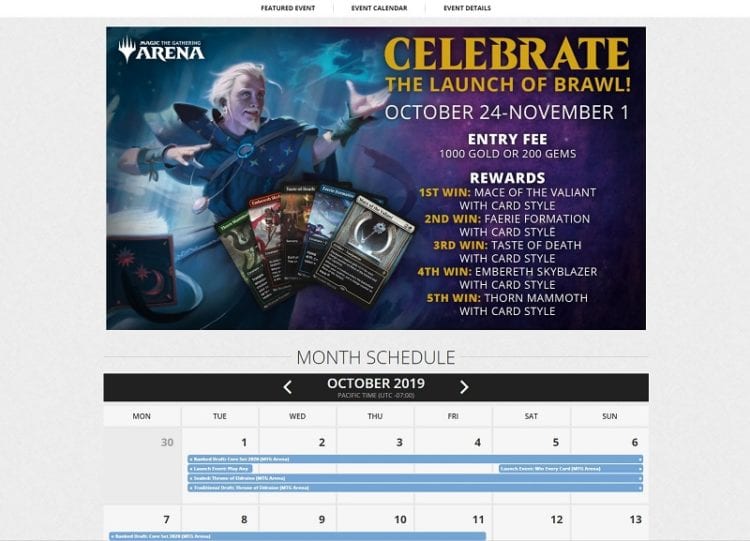 The basics of the game will be explained when you first open Arena. One critical aspect that isn’t covered, though, is the different ways you can play. As established, there are always limited and standard events running, but they come in two varieties: ranked and traditional. Traditional play is when you play best-of-three matches and the results don’t contribute to your overall rank. 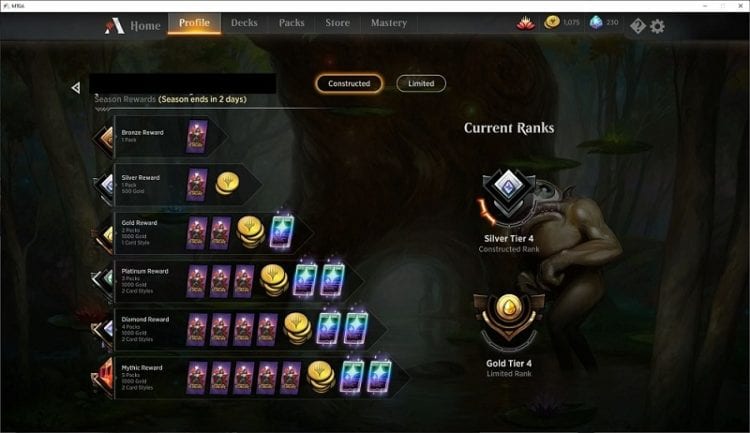 Those with a competitive spirit will want to stick to ranked play. Ranked play allows you to achieve different tiers throughout seasons, which cycle every month or so. The higher your rank, the more rewards you receive. If you reach the highest ranks, you can even qualify for in-person Magic events with huge prize pools.

Before getting in the trenches of ranked play, you’ll need a deck. Thankfully, Arena has you covered. When you sign up, you’ll receive five mono-colored decks, one each for the five colors of Magic. They aren’t very good, so you’ll want to upgrade quickly. But they’re a useful learning tool to get you started. 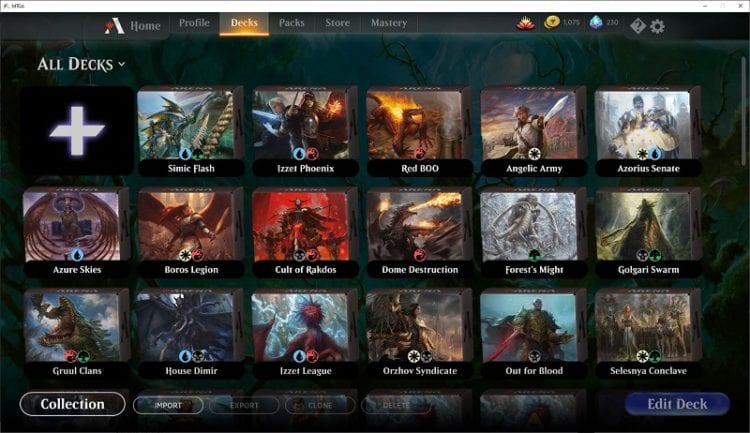 You’ll also receive 10 quests. Each quest will reward you with a deck that combines two colors, of which there are 10 possible combinations. The order in which you receive the decks is random, but that shouldn’t be too much of a concern. As long as you put a few hours in, completing the beginning quests is easy.

The deck lists change based on the most recent expansion, so we recommend checking out the MTG Arena wiki for the most updated lists.

You’ll unlock new cards and rewards as you play Magic: The Gathering Arena, but if you want a head start, you can buy packs. Arena doesn’t allow trading, so you can only add cards to your collection by rolling the dice with booster packs. As you open packs, you’ll also receive wildcards, which we’ll cover in an upcoming section. 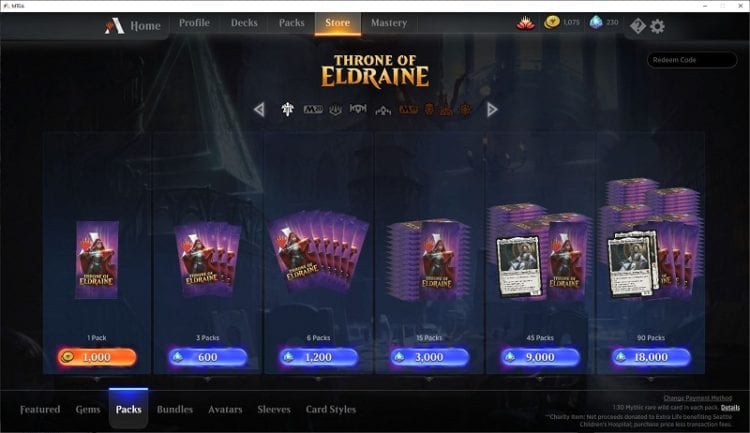 Like most free-to-play titles, Arena has two forms of currency: gold and gems. Gold is earned and can’t be purchased, while gems can be earned through some events but are usually bought through the store. Each new account comes with a bundle of packs and gems at a highly discounted rate, so be sure to take advantage of that.

You can also purchase cosmetics in the store, but if you’re just getting started, it’s best to invest in packs. In addition to packs, you can can use gems to enter events, some of which will give you packs and gems back for game wins.

With all the starter decks and a handful of packs opened, you should have a decent collection. A big part of Magic is constructing your deck, and MTG Arena has a powerful deck builder to help you out. All you need to do is click on the “Decks” tab, then click the large plus icon. 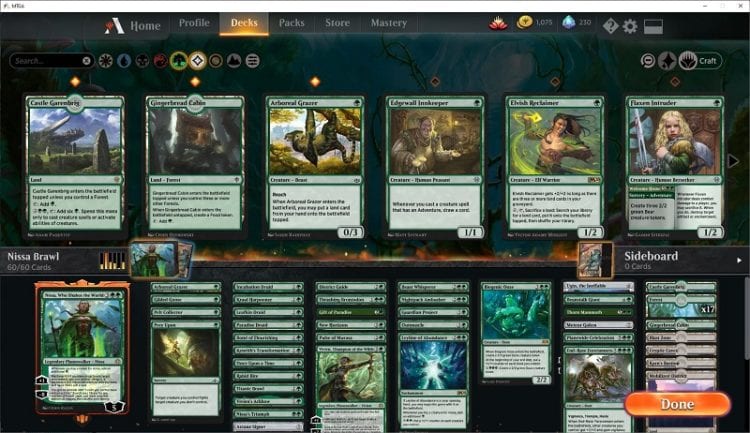 Building your deck is a matter of dragging cards from your collection into the deck list. As you add cards, Arena will recommend the lands you need, which, if you’re just starting out, you should stick with. If you’re more comfortable building a deck, feel free to remove these lands and add your own.

The deck builder allows you to filter cards based on what’s in your collection, certain colors, sets, rarity, and more. You can also view the converted mana cost distribution of cards in your deck and view the types of cards in your deck. As for building your deck, that’s a skill you’ll have to master on your own. We recommend reading up with MTGGoldfish and ChannelFireball.

When building your deck, it’s likely you’ll come across some cards you need that aren’t in your collection. You can dig for those cards by opening booster packs, but it’s much easier to redeem wildcards. As you play Arena and open packs, you’ll be rewarded with wildcards of different rarities, which can be redeemed for any card of that rarity.

Redeeming a wild card only adds one copy of your desired card to your collection, so if you need two, three, or four copies, you’ll need multiple wildcards. (Standard has a four-copy limit.) It’s important to only spend wildcards on cards you really want, though. Once they’re gone, they’re gone, and cards can’t be traded or transferred.

Most of what you’ll be doing on Magic: The Gathering Arena is playing for daily rewards. On the main screen, you’ll see rewards for winning games and completing certain tasks, such as killing 20 of your opponent’s creatures or casting 20 green spells. You can have up to three quests at one time, and they’re traded out every 24 hours. 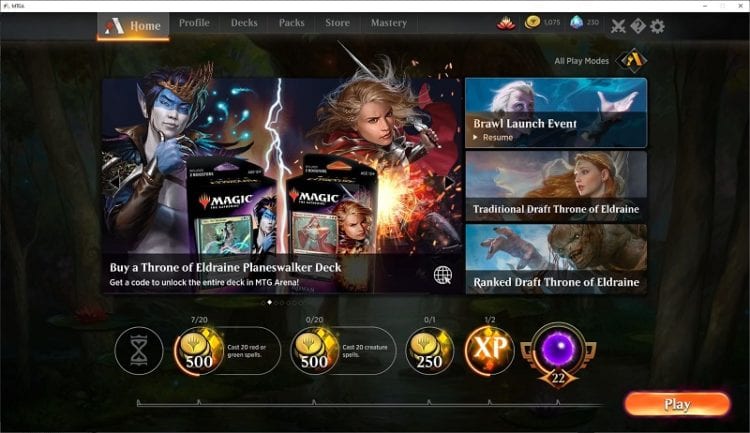 If you don’t like a quest, you can cycle it for another one. However, you can only do so once in a 24-hour period. Daily quests award between 500 and 750 gold and some XP towards your mastery (see below).

There are also weekly rewards that are awarded for winning games. There’s no ceiling on your weekly rewards, but the value diminishes the more games you win. You’ll win cards, packs, and gold as you go, but after 10 or so victories, you’ll be relegated to 50 gold for each win. Rewards are given for any games outside of practice games, so you’re always working towards them.

In addition to daily rewards, Magic: The Gathering Arena also has a Mastery Pass. There are two tiers of mastery, one with the pass and one without. As you play, you’ll earn XP towards your mastery, with each tier offering rewards in the form of cards, packs, gems, mastery orbs, gold, or card styles. By default, you’re entered in the standard track, but you can spend 3,400 gems to unlock the Mastery Pass, which offers higher rewards at each tier. 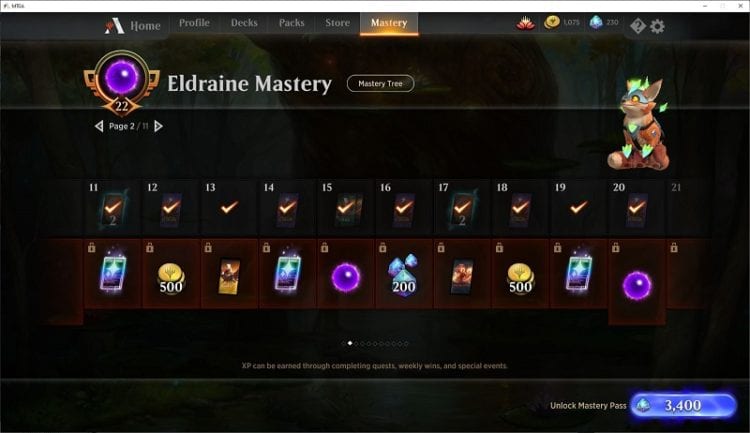 Mastery tiers follow the expansion sets as they’re released, so Arena will reset your progress once a new set comes out. As you rank up, you’ll receive mastery orbs, which can be used in the mastery tree. There are separate paths on the tree that unlock exclusive card styles.

That’s all you need to know to hop into Magic: The Gathering Arena. Magic is a very complex game though, so make sure to keep posted for future guides on how to play and optimize your Arena experience.

Destiny 2: Shadowkeep guide – How to beat the Pit of Heresy dungeon

By Joel Yap2 days ago
Guides

Going Under — Quick tips to get you started