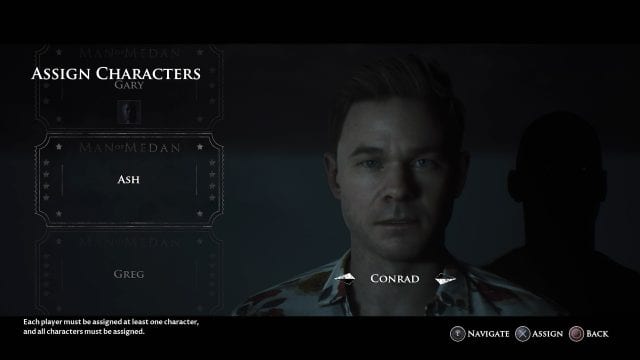 Last week we saw Supermassive Games’ dev diary demo for the Shared Story co-op mode for The Dark Pictures: Man of Medan. Today, the developer released a new dev diary on the Movie Night mode, which seems just as innovative as the Shared Story mode. Game director Tom Heaton says that the studio took inspiration from watching streamers play Until Dawn with friends. The idea of these streams is that a bunch of friends choose a character, then pass around the controller when it’s their turn to play.

The developer came up with Movie Night mode as a way to reflect that play style back to the player. They want to enable this kind of activity by refining it a little bit. When you select the Movie Night mode, Man of Medan will offer an Assign Character screen, where you can assign names to each character. At key points in the story, when a player-character changes, the game will tell you whose turn it is. So players will pass around the controller without having to keep track of which character belongs to which player.

At the end of the chapters, the game will show a “Player Breakdown” showing how each player did with awards such as “Ditherer: Couldn’t make choices,” or “Heart Specialist: Chose most ‘heart’ decisions,” which does look like a fun way of reflecting player choice. It should make for a really fun party game mode, even if you just play it casually.

Supermassive Games emphasized that it designed Man of Medan with both single-player and co-op in mind from the ground up. Both Shared Story and Movie Night mode are not just tacked on top of the single-player experience. These modes aim to evolve co-op gaming into a new standard.

Man of Medan will release on Aug. 30 for PC, PlayStation 4, and Xbox One. You can find more details about the game on the official website.

What do you think of Movie Night mode? A fun new way to play with friends, or just an extra mode you won’t have any use for? Leave your comments below!