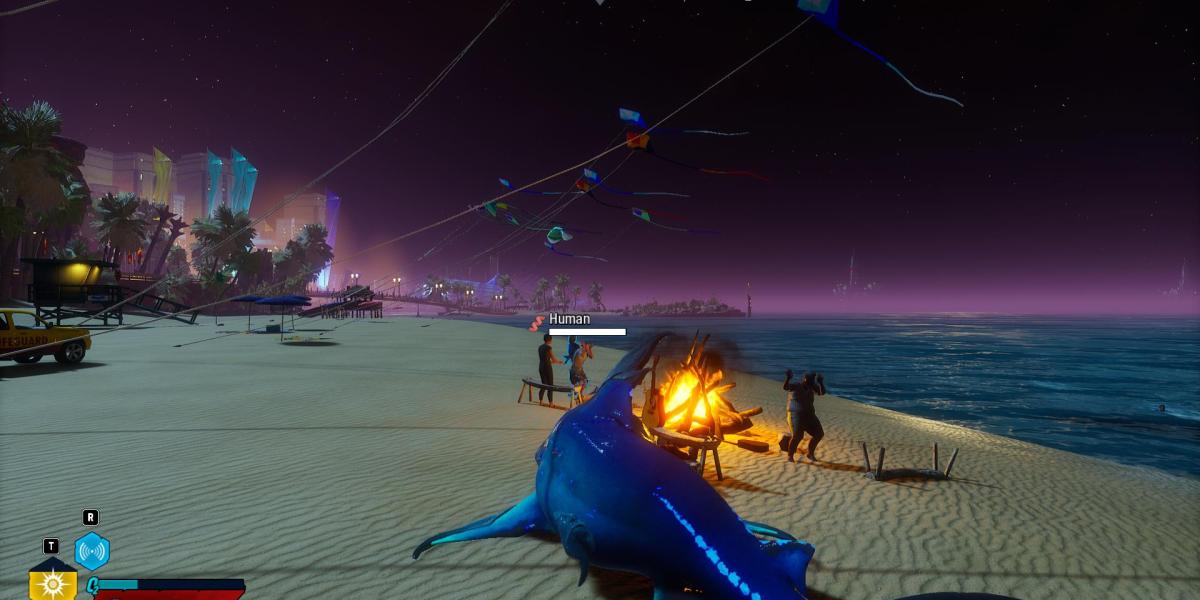 There aren’t enough open-world shark games. After Jaws Unleashed lurched out of the water nearly a decade-and-a-half ago, we had nothing to, excuse me, sink our teeth into. But Maneater is changing this. With a lovely world, solid underlying mechanics, and fairly enjoyable gameplay, it’s easy to have a bit of fun with the game. Unfortunately, there’s barely anything to it, making for one of the most disappointingly empty open worlds I’ve seen in some time.

Last time on some reality show

Maneater‘s loosely defined plot starts with you taking control of a bull shark wreaking havoc in the oceanside community of Port Clovis. But you get the attention of the famous shark hunter and star of the titular reality show, Scaley Pete, by doing so. After a brief confrontation, Pete defeats you and drags you into his boat, only to cut your belly open and rip a baby shark out of you. He then marks it with his knife, loses his hand to it, and throws it in the water. From here, you control the baby shark and see to its evolution.

After this admittedly captivating introduction, the story in Maneater takes a back seat. Aside from a handful of cutscenes, you’ll seldom be doing anything even vaguely related to the plot. The way the structure works is that you accomplish story tasks that are laid out for you in your log and they fill an episode bar. Finish the episode, and you get a cutscene showing what Pete is up to. The cutscenes are well-made and generally entertaining, though. Say what you will, but this game has excellent production values. 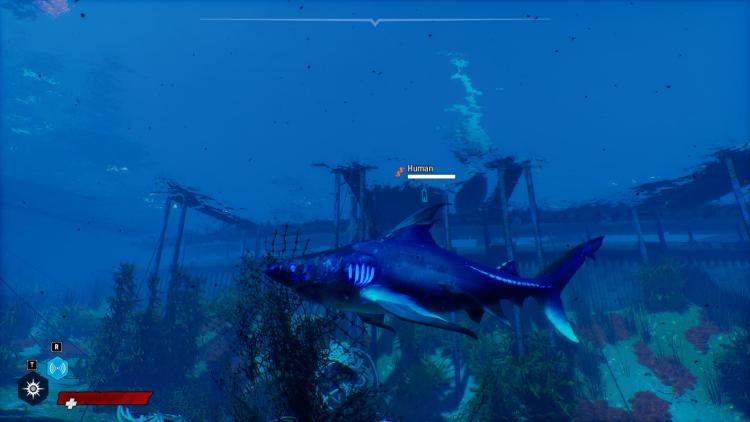 These extend to the world around you; the different areas of Port Clovis are beautiful to look at. Swimming briskly underwater is a treat, as is watching the way your shark moves as it knifes on the surface. The game’s animations are also strong, which does a great job of bringing its many seafaring creatures to life. But, unlike the deep waters that you find yourself diving into, Maneater itself is shallow.

Fast as a shark

The shark doesn’t have many abilities, but what it can do is solid. You can bite your foes, hit them with your tail, and thrash them. There’s no lock-on, however, only a focus option, so you’ll need to constantly reset the camera when fighting hostiles, which is a bit of a pain. The shark can lunge, which functions similarly to how sprinting works in most games, and it has a sonar that it can use to detect collectibles and see what materials you’ll receive from ingesting certain creatures.

Maneater is very much about eating things. There are three different types of materials that you can use to upgrade the shark’s various unlockables, which come in the form of body evolutions and mutagens. Body evolutions change the shark’s appearance, and are applied to its head, body, fins, teeth, and tail. You also have three mutagen slots that have a variety of uses, such as increasing your sonar range or making you faster. Upgrading these with materials naturally increases their efficacy. There aren’t very many types of these unlockables, however, and many of them take nearly the entire game to acquire. But Maneater is so easy that it doesn’t matter much how you upgrade the shark. I died once while playing, and that was only because I decided to see how the game played with a controller during a hectic fight. Suffice to say, mouse and keyboard are a better fit, as focusing on things with the mouse will give you a lot more accuracy due to the aforementioned lack of lock-on.

What you see is what you get

The formula for how open-world games work is fairly set-in-stone by this point. You go into an area that’s dotted with story missions and side activities that focus on your character moving the plot forward via variable set pieces and on repeated task types. Maneater appears to do the same at first blush. But it doesn’t.

Tasks come in a few varieties — story, hunts, and human consumption. But they’re all devoid of any context or anything resembling an actual activity. Absolutely everything boils down to you going to an icon and killing the thing that’s marked. It can be multiple fish, humans, a single fish, or a boat. And that’s it. Aside from two, brief story-based boss battles, nothing in Maneater feels unique or important. It’s more like grinding in an MMO than anything else. 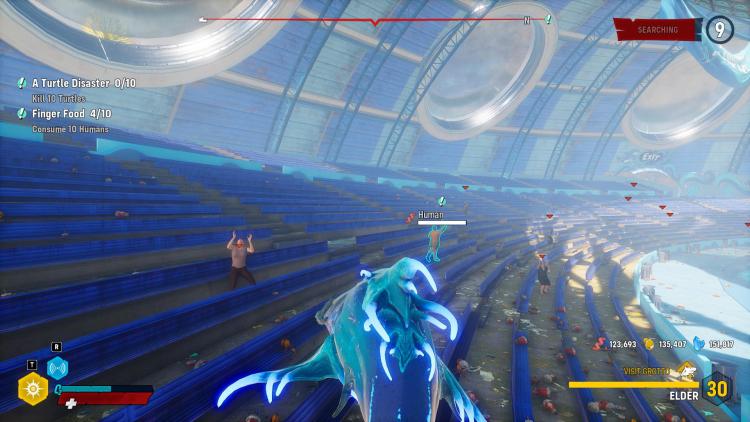 You get to a new area, visit its cove so that you can fast travel there and then get told repeatedly to go eat 8-10 of some fish at a location. Then you eat 8-10 more of some fish. And you keep eating fish until you can fight the area’s apex creature, which then unlocks a cutscene for you to watch. With that done, you move onto the next area. There are unique locations but you never get to do anything interesting in them. All you ever get to do is go to a place and kill X amount of whatever.

Chomping at the bit

That being said, there is a bit more to the game. Each area has three types of collectibles to find, such as chests, license plates, and points of interest. There’s also a bounty hunting system in place. Every time you eat humans, a threat meter shows up. Filling it up all the way gets hunters on your tail. Kill enough of them and a big bounty hunter will show up, and their demise will award a new body evolution or mutagen.

Finding the collectibles doesn’t do much other than give you upgrade materials, which you’ll often have more than you have any idea what to do with. And fighting the hunters is always the same, not to mention very easy. There are 10 in the whole game, and I completed three of them in a brief go, so they don’t provide much in the way of content. It only took me over 11 hours to 100% Maneater, and now there’s nothing left to do other than roam around or pick more fights with weak hunters. 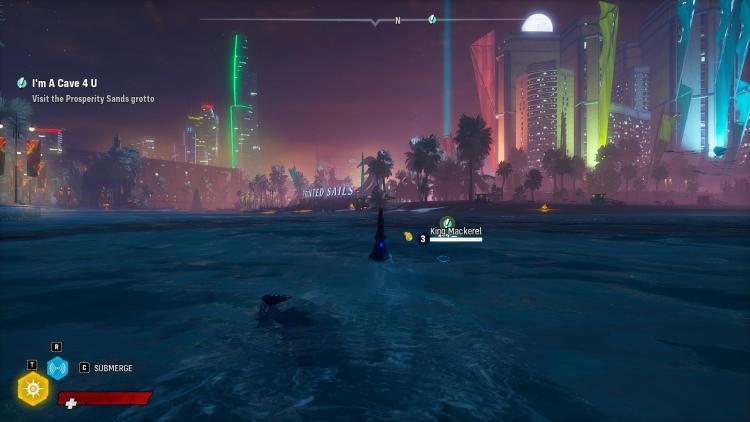 All that for a bag of fish

Maneater has a fair amount going for it and is quite entertaining at first. Raising your shark from a pup to a mega-shark is neat, but the game is devoid of actual import. After a few hours, it becomes a slog to get to a new area just to have to go eat three separate schools of fish. There are unique activities and story missions that would have fit very well in this world, but none of that is present.

If you’re looking to simply mess around in an open-world as a shark, Maneater provides that in a visually-attractive package that plays well. But it’s so endlessly dull and unimaginative that it tended to suck any enthusiasm into the depths. It’s a shame, because it has the bones of a good title — but none of the luscious meat.

Maneater can be entertaining, but it's extremely short and repetitive, with practically no story missions or unique activities.

Maneater – Quick tips to get you started

By Daniel Pinheiro18 hours ago
Reviews