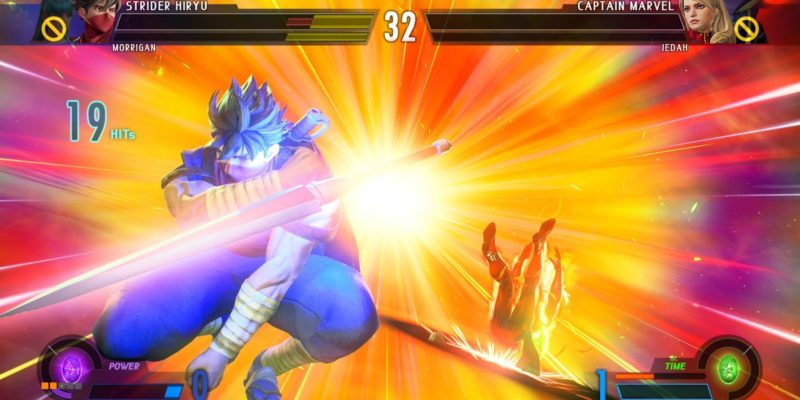 The Marvel machine rolls inexorably on, BIFF and KAPOWing everything in its way – and while Marvel vs Capcom: Infinite obviously doesn’t share much with the cinematic universe that’s spawned ten thousand movies, I don’t think it’s a coincidence that the new Marvel vs Capcom game focuses on Infinity Stones and features Ultron and Thanos and so on.

So there’s been a Convergence and the Marvel and Capcom universes have collided and Ultron is a dick, and now heroes from both universes need to team up and find the Infinity Stones before Ultron does, and also punch him in his silly robot face. But you’re (hopefully) not here for my incisive commentary about the plot. You’re here to find out if the Marvel and Capcom universes have collided with the PC gaming universe in a good way.

After a 55GB(!) installation, running the game presents us with this:

This is mildly confusing to me, but more options are rarely a bad thing, and I think some people will approve of this. From what I can gather, some people like DirectInput, and some people complain that it causes lag and is terrible and so on. Sometimes people complain about it not being included in fighting games. Others complain about it being included. This inclusion may be something to do with reducing conflicts between XInput and DirectInput. I don’t know because I’m not particularly entrenched in the PC fighting game community, but hey! You have an option!

So, that aside, let’s have a look at the way graphical things work in-game: 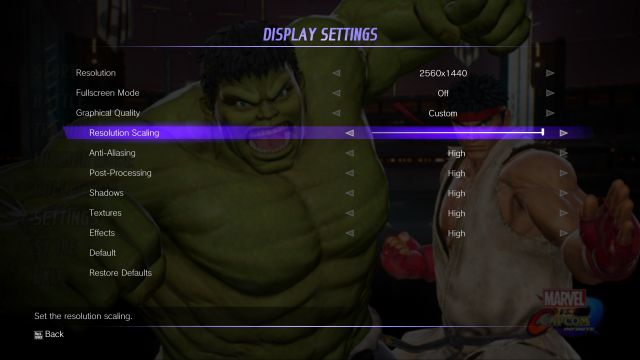 Nothing out of the ordinary and not spectacular, but certainly serviceable.

Nothing hugely unexpected. You might be surprised at the “No” to full-screen, but I’ll explain that in a moment. You’ve got resolution which on my monitor at least is capped out at 2560×1440 (it’s the highest my monitor supports, so I can’t say for sure whether it’ll work at higher resolutions) and, as you’d probably expect, the framerate caps out at 60. Not overly surprising for a fighting game: frames matter.

Other than that, basic detail options that range from Low to High. Here’s a quick comparison between how good and awful things can look, assuming I’ve labelled them correctly: 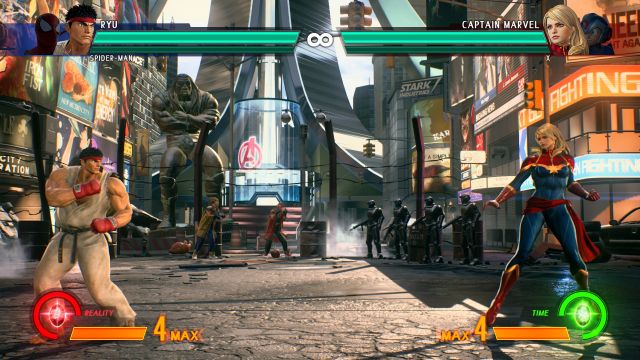 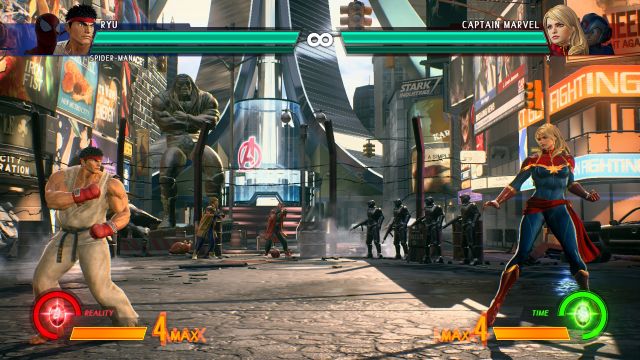 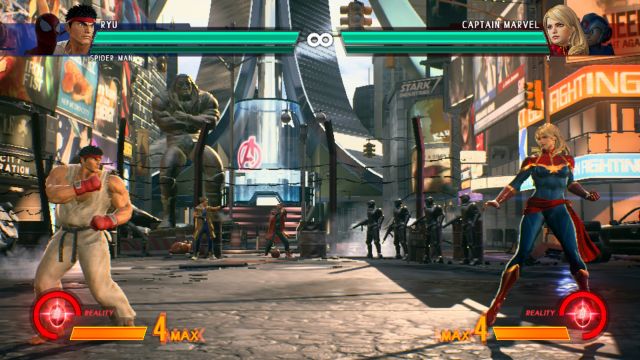 Everything on Low, with Resolution Scaling set to make everything look that much more dreadful.

Honestly, it doesn’t look too bad on either High or Low, with aliasing probably being the most noticeable thing (in stills, at least). It’s when you start messing with resolution scaling that things start looking like you need to visit an optician. On my system none of this makes absolute any impact, but that’s probably to be expected – I’m running this on an i7-3820 with 16GB RAM and a GeForce 1080 Ti, so, uh, yeah. It should run fine.

Which is where we get into slightly interesting territory: Marvel vs Capcom Infinite really does not like full-screen mode.

I don’t actually know why. At first I thought it was down to full-screen overlays like GeForce Experience, but nope; turning them off doesn’t impact anything. Adjusting resolution or display settings doesn’t make a difference either, and running everything at the exact same settings but in windowed mode (yes, even with the full-screen resolution) fixes everything. 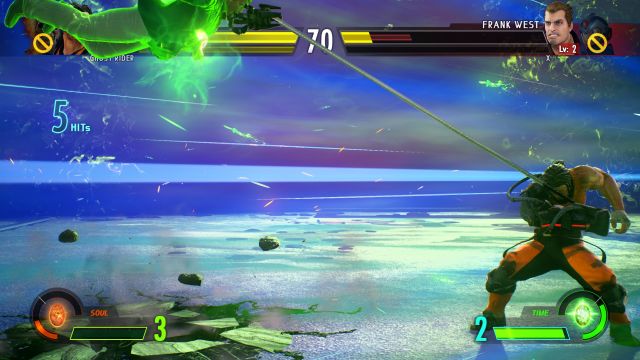 Frank West with the power of an Infinity Stone. God help us all.

The “everything” in this case is a huge amount of stuttering and small freezes, most especially noticeable when a new character appears on screen. The easiest way to test this was when using Rocket Raccoon: once of his attacks calls Groot in to slam the enemy, and doing this causes an almost second-long pause as the game appears to load in the tree-man. Not exactly ideal.

It’s possible that this is a quirk of my set-up or is an issue that’ll be fixed by launch, as there is apparently a day-one patch due, but it’s worth noting nonetheless that – for now – Windowed is the way I’m playing it. As long as I’m not in full-screen, everything is absolutely fine.

That aside, everything’s pretty hunky-dory. Marvel vs Capcom: Infinite looks great, supports keyboard and gamepad rebinding, and has a wealth of general options available. It also notices if you tap a key on the keyboard or press a button on the gamepad, and switches the control prompts accordingly. Also: full mouse support in menus! And the fact that I consider this a noteworthy plus makes me very sad for the state of some PC versions. 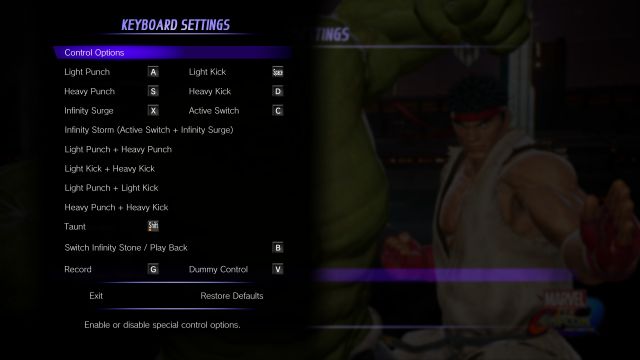 The default keyboard settings aren’t what I’d call ideal (if you really want to play on keyboard), but rebinding is simple enough and you’ve got every “two-buttons-at-once” option available to controllers, so you’re not limited. And yes, you can change movement too – it’s tucked away in Control Options.

One minor gripe is that it doesn’t show Dualshock buttons if you’re using a PS4 controller, but this might be an artifact of my using ScpToolkit to run it, stopping the game from recognising it as a PS4 controller. Steam supports PS4 controllers but it’s currently in a very wonky state, so I’m still using external programs to make things work fine. It’s not a huge issue (prompts in the command lists tend to show the buttons as things like “Light Punch” rather than “X”, for instance) and it’s also one that may be fixed simply by using Steam’s own support. Still, an option to manually choose the display of gamepad prompts as Xbox/DualShock/Steam controller would be nice.

In terms of actual gameplay, I rather like Marvel vs Capcom: Infinite. As with its predecessors it’s still somewhat uncomfortably straddling the line between being newbie-friendly and being a hardcore fighting game, but it’s enjoyable either way.

For new players, there’s a training mode that outlines the basic commands from “walking” through to Hyper Combos and the new Infinity Stone uses, as well as a Mission Mode that teaches you special moves and combos for individual characters. Concessions are also present in the form of Auto Combo (where mashing Light Punch performs a full combo, including an air launcher and air combo) and Auto Super Jump, which has you automatically leap into the air after launching an enemy up there. 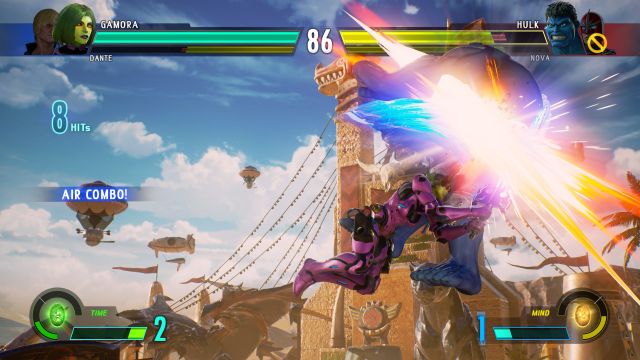 Don’t panic: there are still plenty of flashing lights and ridiculous combos.

It’s also a little bit less chaotic than its Marvel vs Capcom predecessors by virtue of your team containing two characters rather than three, which might sound like a minor thing, but it does make things a hell of a lot less confusing in terms of characters leaping in and out of battle and all sorts of flashing lights and special moves going off at once.

That said, it is still a “proper” fighting game. Auto Combo and the like are useful, yes, but if you want to pull off some dazzling 60-hit combos that involve switching characters in and out, you need to actually master the way things work. In this, it suffers the same problem as most fighting games in that it’s really bad at teaching you how individual characters are meant to work and giving you a primer. It teaches you the very basics, but you’re pretty much on your own from there. 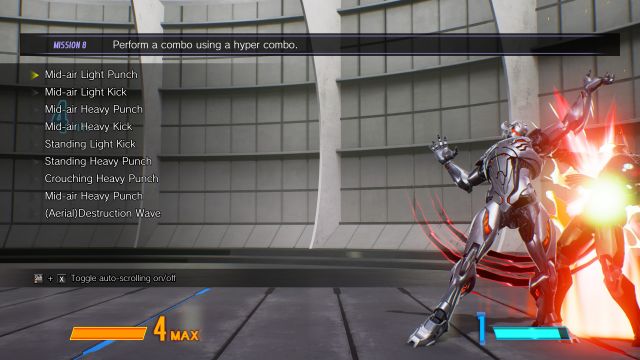 Yeah, uh, I’m not pulling this off without some serious practice.

This being pre-release and with very few players around, I can’t currently judge the netcode; you’ll have to wait until launch for that. I will say that the offline offerings are far more complete than Street Fighter V‘s, though. Other than Training and Mission modes, there’s an offline VS mode, a VS CPU mode, an Arcade mode to battle through (which, alas, doesn’t seem to have individual endings for each character), and a full-fledged Story mode that offers a little bit more than just fighting against enemy teams in between cutscenes. One notable early story level, for instance, has you fending off a certain number of fodder-like Ultron Drones as they try to breach the walls of a city – essentially creating a soft time limit. Fail to kill one fast enough, and it’ll swoop off and smash into the walls. It’s not quite NetherRealm in terms of having individual character-based “chapters”, but it tells a story with some wit and set-pieces.

Also, it’s hard not to fangasm at some of the interactions between Marvel and Capcom characters if you’re a fan of the various franchises. While it doesn’t have the sparkle of the Marvel cinematic universe it has some decent one-liners, like Iron Man snarkily referring to Ghosts ‘n Goblins‘ Sir Arthur as “Lance-a-Little”, or Chris Redfield chewing out Spider-Man. 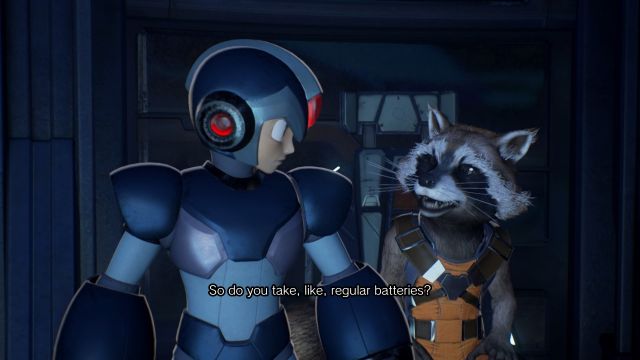 Rocket, of course, is always a joy.

I do want to shine a little bit of a light on the Training Mode, if only because I love some of the options in there. The usual suspects like what the AI opponent does are all present, but “Network Simulation” is something I haven’t seen much of before, letting you simulate up to 10 frames of input delay to practice your moves and combos in a less-than-perfect settings. Thumbs up.

So, the PC version is… well, decent. The full-screen problem is a problem, particularly if this isn’t limited to my machine and impacts the full-screen mode for everyone, but – considering the amount of Alt-Tabbing I do – I don’t personally have too much of an issue running the game in a 1920×1080 window. That aside, performance is basically perfect, with loading times in an acceptable range and the framerate rarely dipping below 60… although it really shouldn’t ever do that on my specs anyway.

For many, though, netcode is likely to be the big thing, and that’s something I absolutely can’t comment on. If only for that, I’d caution waiting for launch and seeing how the fighting community reacts, because that’s the one thing that can land a KO on any aspiring fighting game for many players.