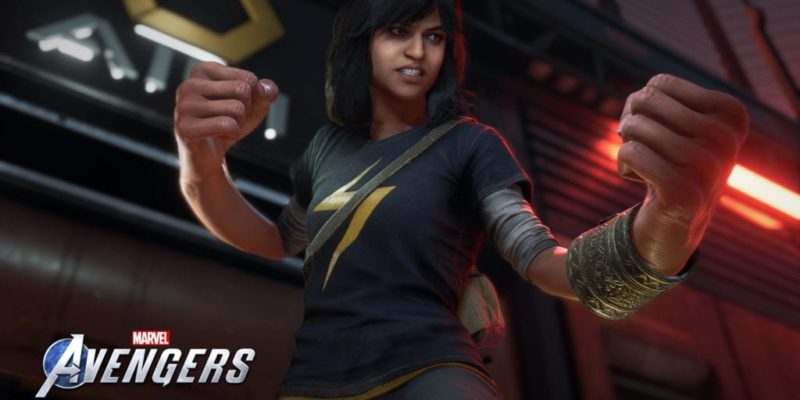 With the New York Comic-Con in full swing, it’s only natural for the Mighty Avengers to make an appearance. We put these heroes to the test by going hands-on with Marvel’s Avengers, the upcoming action game developed by Crystal Dynamics. While doing so, we got to try out the game’s exciting new character addition: Kamala Khan (aka Ms. Marvel), who was announced at the convention.

Crystal Dynamics head Scot Amos explained that the company kept several key pillars in mind while developing Marvel’s Avengers, beginning with creating an original story based on the comic books. Separate from the Marvel Cinematic Universe, the game takes 80 years worth of history and puts Crystal’s spin on it – similar to how it rebooted the Tomb Raider franchise. Crafted in close collaboration with Marvel, the story had to include both a sense of authenticity and an original take on the comic book franchise.

As shown at E3, the story begins in San Francisco, at the opening of the West Coast Avengers headquarters alongside the unveiling of a new helicarrier. However, the event is hijacked, with soldiers threatening to destroy the Golden Gate Bridge using weapons stolen from SHIELD. I got to play through this introductory sequence to get a taste of how each character plays. 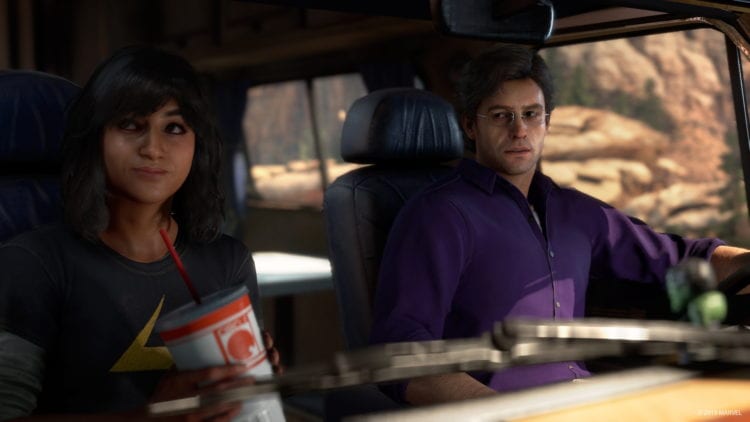 Combat is relatively straightforward, with a light attack, heavy attack, dodge, and jump commands. Players can string these moves together into combos. Each character also has a ranged attack along with a selection of special abilities. Special powers include one support ability, one offensive ability, and an ultimate ability.

Fighting is intuitive for the most part, although I found myself mostly mashing buttons until things fell. In addition to knocking enemies around, Thor can throw his hammer to pin enemies in place. Then he can either fight with his fists or recall the hammer, hitting more enemies as it returns to his hand. He can fight without his hammer, but then he becomes very similar to characters like Hulk. Once his power is charged, he can call down lightning blasts to electrocute foes.

Iron Man can fly and has an arsenal of high-tech weapons that include repulsor blasters and the unibeam on his chest. Hulk smashes, of course, but he can also grab up an enemy in one hand to use as a club. This became my favorite way to deal with ranged foes. Captain America has a variety of shield abilities, while Black Widow fluidly switches between using twin pistols and martial arts. She can also temporarily turn invisible, giving her a distinct edge during her throw down with Taskmaster. 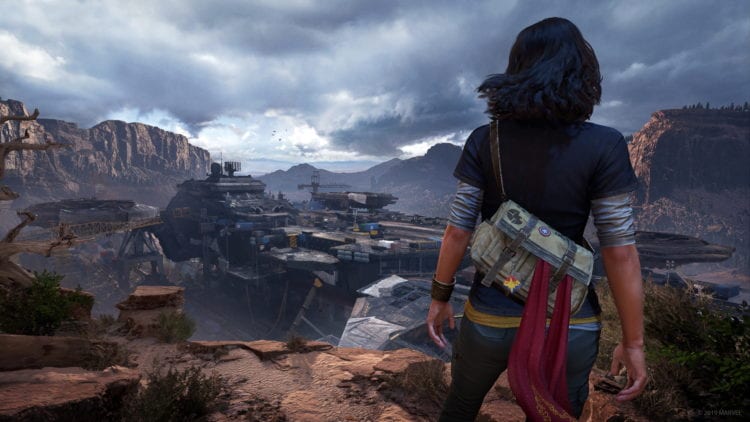 However, the heroes can’t stop what’s to come. Specifically, the helicarrier and its terrigen-based technology are destroyed, taking Captain America and much of San Francisco with it. The event, known as A-Day, forces the Avengers to disband. Advanced Idea Mechanics (AIM), which comic book fans might recognize, rises up to fill the void they leave behind. AIM believes that science and technology, in the form of robots and power suits, can be used in place of superheroes.

As a result, superpowers are outlawed, and those changed by the terrigen, called Inhumans, have to hide their abilities for fear of being arrested. That’s where Kamala Khan comes in.

Kamala is the narrator in the background of all the trailers, and it’s revealed that she’s the main character of the campaign. Not only is she a fan of the Avengers, she has her own polymorphic abilities, which let her stretch and reshape her body into almost anything.

In the game, that means she enlarges her fists and feet as she kicks and punches while stretching her arms out to hit enemies at range. She can also heal herself, unleash a Hulk-like thunder clap, and her ultimate ability lets her “embiggen” into a giant to stomp on foes. 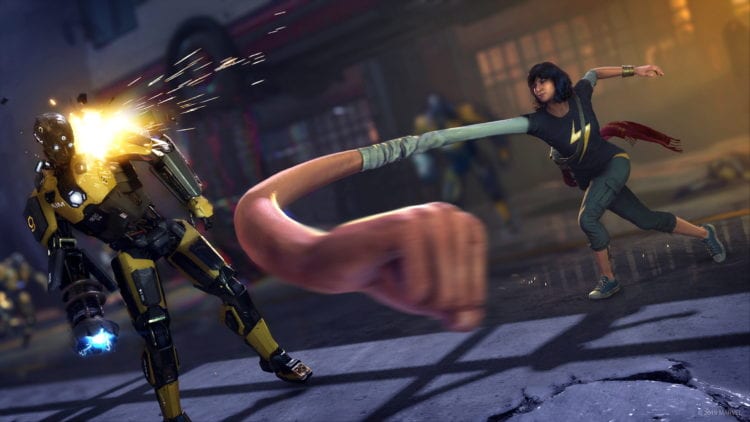 I got to play as Kamala in the HARM training room, which summoned groups of increasingly difficult holographic enemies to take on. From what I’ve seen, she can easily match some of the Avengers’ heavy-hitters. She can’t take as much damage as Thor or Hulk, but she’s fast, agile, and incredibly versatile. Kamala can sweep out her arms to hit multiple enemies, quickly dodge and run, and weaken foes with ranged punches before closing in.

There were a couple of close calls, especially as the AIM robots started to come in with specialized weapons like shields and shock batons. Fortunately, some enemies drop health vials after they’re defeated, which kept me going until my healing power recharged. I was able to defeat the final boss – a giant robot with a flamethrower – by using my embiggen power to kick and step on it.

As a young superhero superfan, and a character who is relatively new to the Marvel universe, Kamala seems to be the ideal main character. She has to track down the Avengers and bring them back together, which is no small task. Things are grim.

Stark loses his fortune and lives as a recluse. Banner blames himself for A-Day and similarly vanishes. Black Widow also goes underground, presumably being a super spy somewhere, while Thor leaves his hammer behind and disappears. Kamala has to find them all and bring them back to an old helicarrier, which becomes their base of operations. 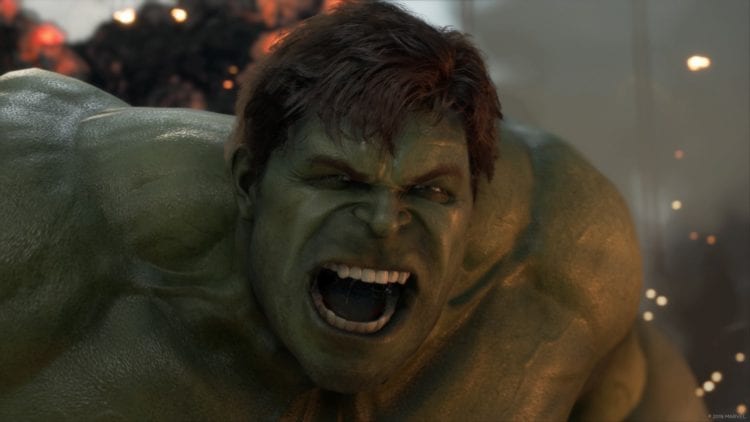 Amos explained that Marvel’s Avengers will include two types of missions. Hero missions are single-player only and are usually tied to the campaign. They spotlight a single character who has a personalized story and will unlock as the campaign progresses. Although they’ve already revealed enemies such as Abomination and Taskmaster, Amos did not state whether characters will face off against iconic comic book enemies in each of their personal stories.

The second mission type is called Warzone missions. Here, players can come together online to play cooperatively to accomplish different objectives. According to Amos, there will be drop-in multiplayer, but he was less specific about how characters of different levels will play together. Additionally, he said that cross-platform play probably wouldn’t be included at launch.

Characters level up and can pick up four types of gear while on missions. Players can use gear to customize a character’s abilities, with extra bonuses if you can assemble set pieces. Additionally, each character has several different skill trees. Some unlock new moves, while others help to strengthen their attack or support capabilities.

However, players can make cosmetic changes to characters with dozens of outfits inspired by the comics. One of the most prominent is Hulk’s Joe Fixit outfit with the suit and fedora.

Marvel’s Avengers releases on May 15, 2020, for PC, Xbox One, PlayStation 4, and Google Stadia. That’s when Kamala Khan will take her place as an Avenger to help save the world.

By Ben Kerry2 days ago
Opinion

By Otto Kratky4 days ago
News