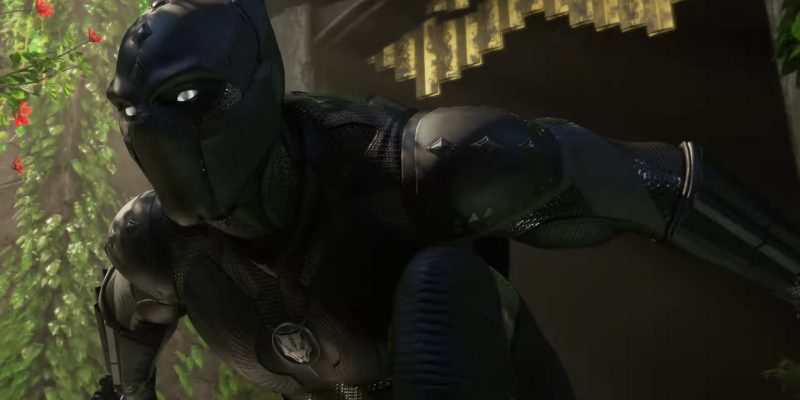 Marvel’s Avengers took up a big chunk of today’s Square Enix showcase, and for good reason. It’s a massive title for Square Enix, one that hasn’t exactly performed up to expectations. The game has fallen off for a majority of players and embroiled itself in a small controversy regarding XP changes. Today was a chance for developer Crystal Dynamics to flaunt the new content heading to the game, and it delivered in spades. A ton of content is coming to Marvel’s Avengers, including an expansion that will introduce Black Panther to the cast.

Before revealing the Black Panther expansion, a majority of the focus was on Hawkeye’s addition to Marvel’s Avengers. Besides a decent amount of gameplay with the bow-wielding hero, Crystal Dynamics revealed the next step for the game’s Future Imperfect story. In this new arc, players will go along with Hawkeye as he tries to find Nick Fury. Of course, things don’t go according to plan and somehow the team ends up sent into a future version of Earth. There, Hawkeye and the other heroes come upon Maestro, an older, wiser version of the Hulk. This new content is all available for players today.

Today’s showcase also outlined the game’s roadmap for the future. These include new events, character-focused quests, and advancements in the game’s ever-winding story. First up in spring is the Tachyon Anomaly event. While it’s ongoing, the limit on how many of one hero you can have will be removed. If you want, you can have four Hulks or Thors running around smashing baddies during this time.

The next event on the roadmap should arrive in May, and focuses on Black Widow. That shouldn’t be too surprising as a Black Widow movie is slated to release around the same time. During this event, players can earn new Red Room nameplates by completing quests for each hero. New hero outfits will also be added as part of this limited-time event.

After Black Widow’s time in the spotlight, things are shifting back to the game’s ongoing story. This summer, the Avengers will have to travel to the Frozen Tundra and fight against the Scientist Supreme. In the north, the team finds that a new Cosmic Cube is being constructed.

The biggest moment in today’s show goes to the reveal of Marvel’s Avengers Black Panther based expansion: War for Wakanda. So far the expansion doesn’t have a release date, but we do know what’s coming along with it. Naturally, Black Panther is being added to the game as a playable character. Players will also get a host of new hero outfits, new villains, a new faction, and an increase to the game’s level cap.

Head back to Arcadia Bay in Life is Strange: Remastered Collection this fall