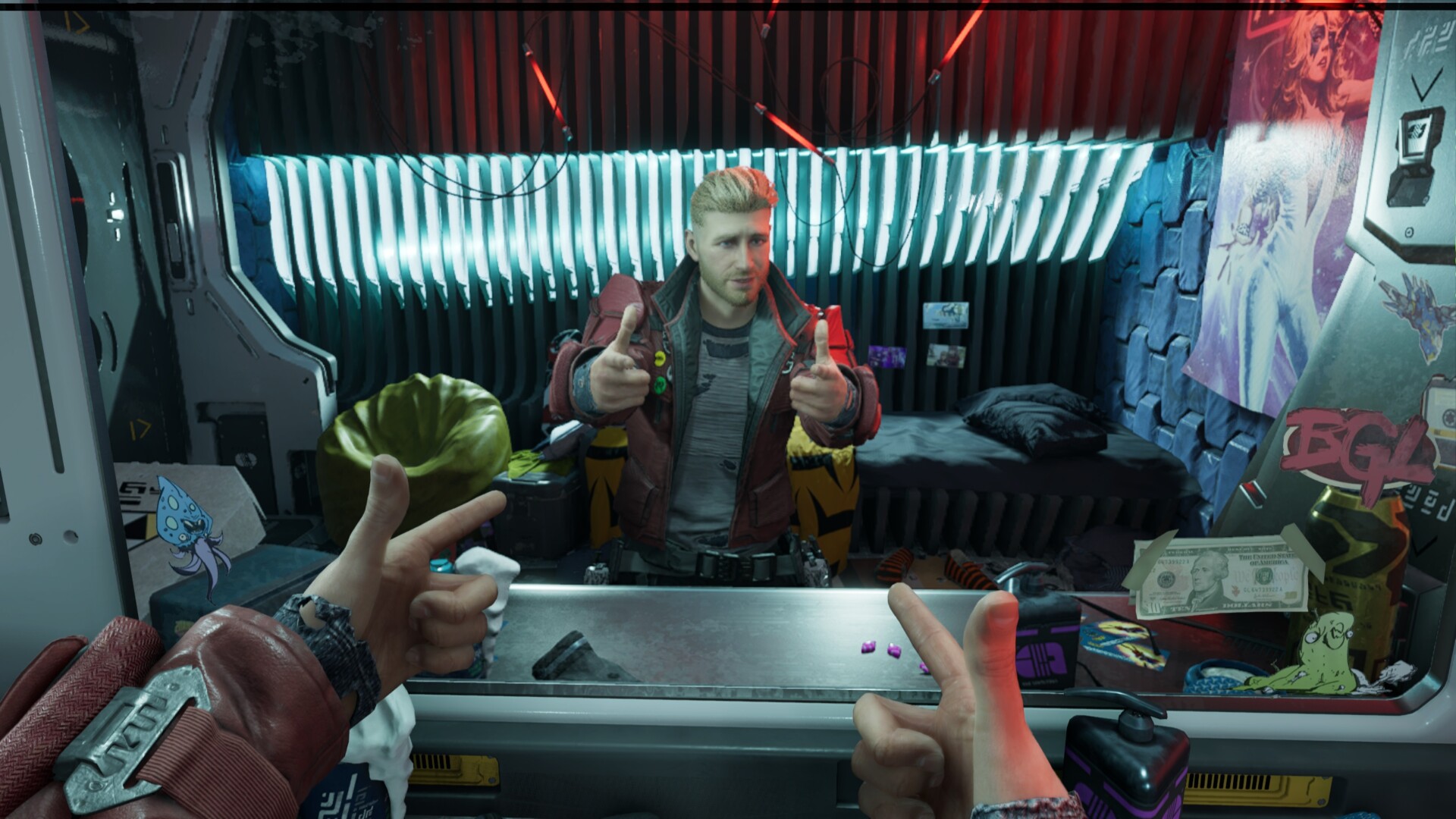 Each of the team members at your disposal in Marvel’s Guardians of the Galaxy has skills that you can and should make frequent use of. Early on, it’s going to take a bit of time before you can purchase new ones.

So, I’m dividing the best skills up into categories and I’ll be specifying which you should buy first. Knowing how to make proper use of these abilities can make battles go by more quickly, so you may as well use every tool at your disposal.

This one is probably the most important, as stronger enemies are the most threatening. You’ll typically want to focus on staggering foes before doing this, but you don’t necessarily need to. When it comes to the early part of the game, there are two abilities in particular that do the best damage. Honestly, your very first purchase should be Star Lord’s Fan the Hammer ability, which costs two skill points. This roots him in place and has him rapidly fire his elemental guns without stopping. It’s not risk-free, though, as he can still take damage while this is happening. As such, you should use it when you’re up against a single strong foe, preferably one that’s been stunned.

You can, of course, use it regardless, as it makes short work of weaker foes, so you can get them out of the way and then focus on the big guy after. Aside from that attack, Gamora’s starter ability, Deadly Strike, should be your other go-to. If an enemy is putting the hurt on you, just give her a shout and she’ll take a chunk of their health immediately if the attack doesn’t kill them outright. Unlike the above Star Lord ability, Deadly Strike is immediate, so it’s super quick and does concentrated damage just as its name applies. Gamora also has an even stronger ultimate ability that does single target damage, but you won’t be able to access that till near the end. 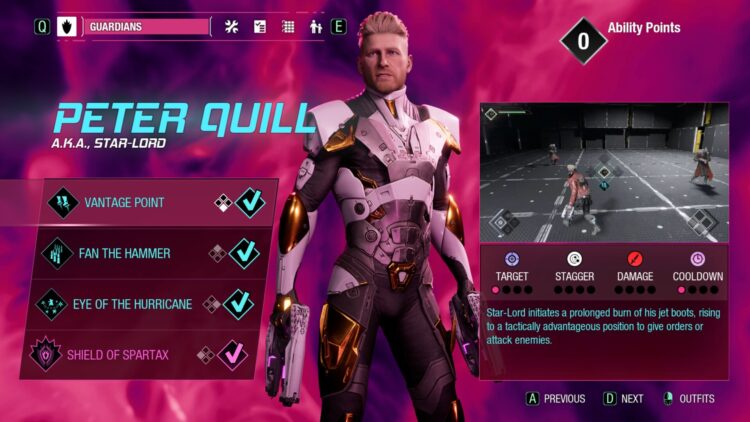 These are the best skills for moments when enemies are grouped together in Marvel’s Guardians of the Galaxy. Incidentally, Rocket has an ability that does just that. But the best AoE attack is also Rocket’s, so you can’t use them back-to-back. Rocket’s starting ability is called Cluster Flark Bomb, and it causes an explosion that deals moderate damage to everything range. You can only command your team to attack targets individually, so you’ll want to point at an enemy that’s surrounded by their allies when using AoE attacks. While Rocket has the best one of these, Gamora, Groot, and Star Lord also have them. Note that I just ranked them in order of effectiveness.

Gamora’s level 2 ability is called Shadow Strike and it hits enemies in an area for good damage. You should use that when Rocket’s on cooldown, or alongside it if Rocket didn’t finish them off. Groot, on the other hand, has an ability called Uproot, which knocks lighter enemies into the air. It doesn’t have quite as much of an area of effect as the previous two, but it’s useful in a pinch. Star Lord’s level 3 ability can be used similarly. It does better damage, but, honestly, you’re better off focusing on staggering the big guys than worrying about maneuvering your player character to tackle small fry.

Stagger is where Drax excels. His starter ability, Destroy, only does light damage, but it does a large amount of stagger, often filling up a tough enemy’s gauge partway at least. When a stronger foe shows up, it’s usually a good idea to sic Drax on them right away and then blast them with your element of choice. Drax’s ultimate is even better for this, as it not only does even more stagger damage, but holds the foe in place while said stagger damage is being applied. As for buying stagger abilities, Groot’s Mammoth Grab is a great choice. It functions much like his first ability, as it holds an enemy in place, but it also does stagger damage over time.

For Groot, that’s what he’s best at, as his first ability holds a group of weaker enemies in place for a time. That can be really useful before using Fan the Hammer. Gamora has a level three ability called Stagger Wave that deals stagger damage to groups but, again, staggering is more useful against stronger foes, as the weaker ones go down too quickly to really worry about that. 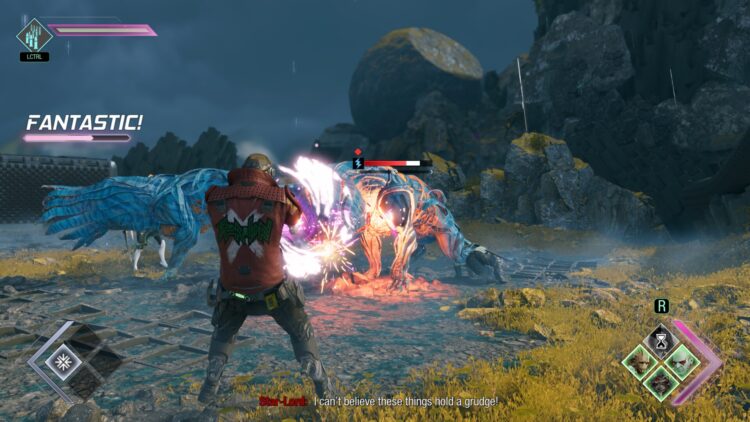 In fact, instead of staggering weaker foes, Star Lord’s element attacks are much faster than staggering. His ice attack freezes them after a short while. Frozen enemies take a huge amount of damage, so it’s a great way to take foes out fast. His electric attack, on the other hand, will temporarily stun foes and chain to their nearby friends. It’s great for doing damage while keeping several occupied. The wind attack is really only useful for bringing distant enemies right to you, but plasma is great for strong foes due to the sizable burning damage and additional stagger.

To sum up, I definitely suggest buying Fan the Hammer, followed by Mammoth grab, and then Shadow Strike. That’ll give you two strong single target attacks, two strong stagger attacks, and two good AoE attacks all within your first seven levels. An easy way to take down any strong enemy super quick using these is to have Groot hold them in place using Mammoth Grab, then follow up with Drax using Destroy. This will stagger them, allowing you to have Gamora use Deadly Strike, followed by bringing them to hell with Fan the Hammer.

That strategy can honestly make short work of strong adversaries throughout the whole game, making them far less threatening. This is even better for when you run into church goons that buff and resurrect their friends. It often pays to take out the strongest enemies first and then clean up the stragglers with Cluster Flark Bomb and Shadow Strike. Supplementing those two with electric element attacks will make you a force to be reckoned with. As long as you’re paying attention, anyway. If not, make sure to huddle up for the buffs and healing! 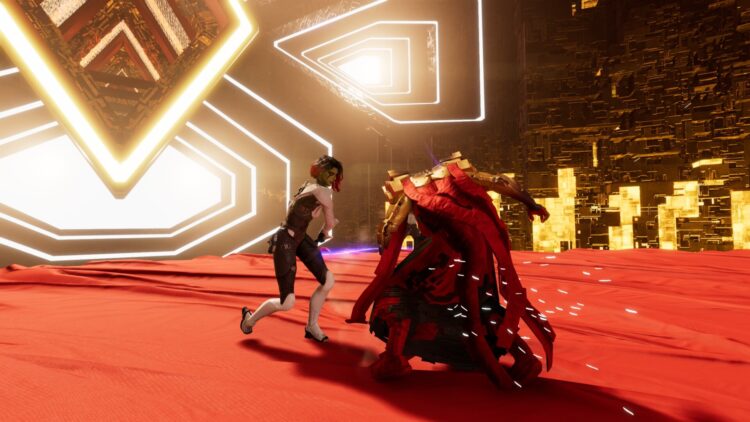 Marvel’s Guardians of the Galaxy: The best perks