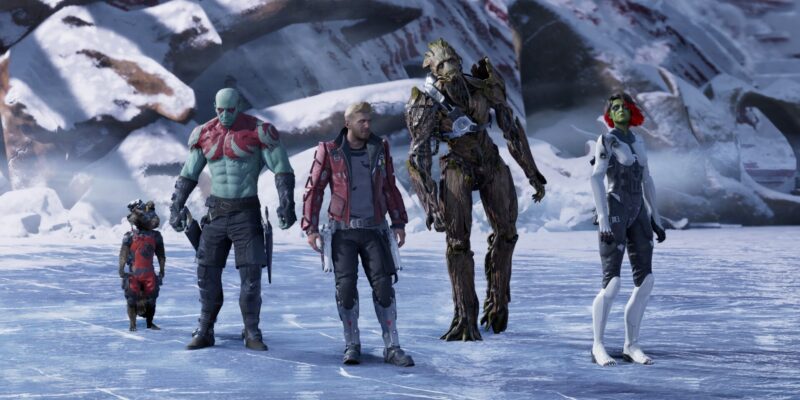 Marvel’s Guardians of the Galaxy is finally out for everyone to blast their way through. The PC version has a fairly large install size and I had a couple of glaring problems with it, but I can’t say this isn’t a gorgeous game that usually runs well. The PC version made some pretty big headlines the other week when it announced that it was cutting its install size down from 120 GB to about 80 GB. When I first installed the game it was indeed about 120 GB. Now, though? It’s 75 GB. That’s a pretty successful optimization if I do say so myself.

First up, let’s take a look at the game’s specs.

To be clear here, those recommended specs are not helpful or accurate. My rig is better than the recommended, but I didn’t even get a constant 60 fps on mostly maxed settings. It was fine, but I dropped to the low 50s a lot. I even had one of the more intensive settings set to low. Granted, the game would occasionally go up to the 75-90 territory while playing, so it wasn’t all bad. But, if you’re using something similar to the recommended specs, you probably aren’t going to be playing Marvel’s Guardians of the Galaxy at 60 fps. I did play at 1440p, though, so your mileage may absolutely vary.

My time with the game was pretty good, but I did have two rather large problems while playing. The most obnoxious of these is that, during cutscenes, audio would drop out. Attempting to pause the game would make it freeze for a minute or two. This happened time and time again, and I have no idea why. Additionally, with a DualShock 4, R2 worked perfectly fine for shooting but I wasn’t able to scan items with it. Instead, I had to take my right hand off my controller and scan things using my mouse’s left click. It wasn’t a huge issue for me due to my specific setup, but if it happens to other folks, they’re going to be in a spot of bother, as you need to scan things. I couldn’t find any way to fix either of these issues. Now, let’s look at the display and graphics settings. 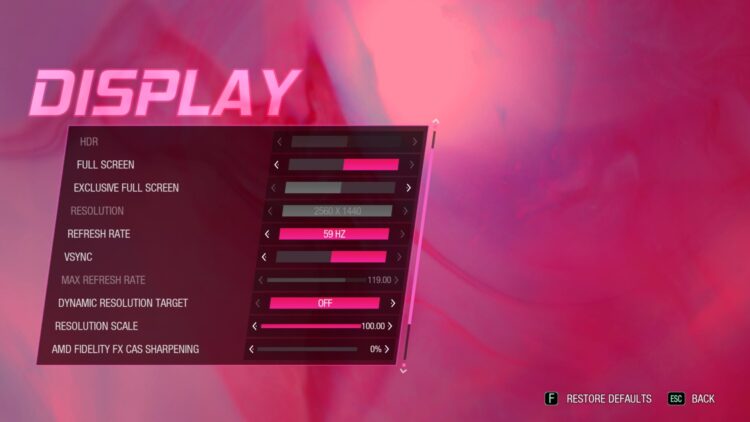 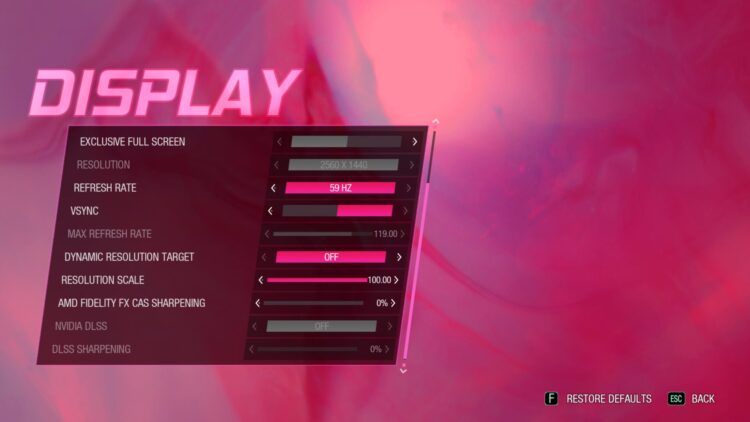 As you can see, this comes with support for multiple refresh rates, dynamic resolution, CAS sharpening, and DLSS. I couldn’t test the DLSS because I have an AMD card. It’s also the bane of my existence, so there’s that. I had the game set at 120 fps even though I never got anywhere near that. Probably should have gone for HDR instead. Oops. Also, the game pauses when you alt-tab. Not freezes, but it literally goes to the pause screen immediately. Here are the graphics options. 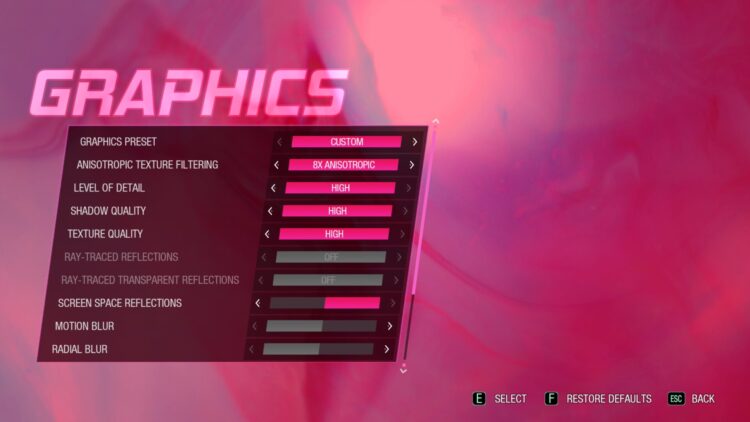 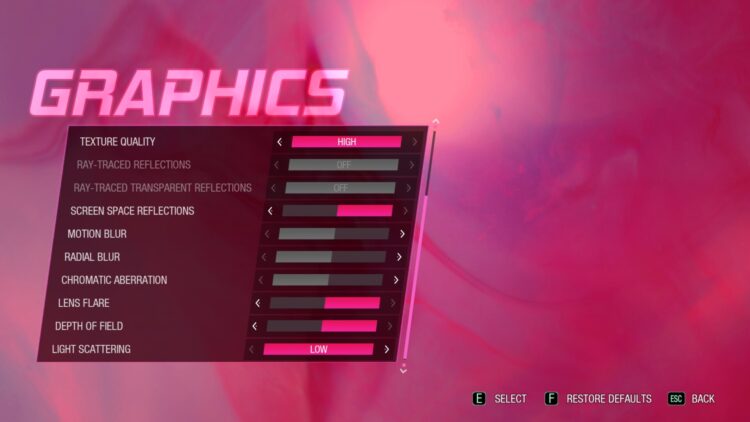 For a AAA game, there was less here than I was expecting. Strangely, you can only change texture quality after a restart, so you can’t tweak that on the fly and check the fps impact immediately. It’s been a while since I’ve seen a game do that. Anisotropic filtering ranges from x2 to x16, and the only ones of the usual suspects are texture quality, level of detail, and shadow quality. Ray tracing is in but, again, AMD card. The only other setting that’ll impact fps is light scattering, maybe. I set that to low to get a few extra frames and I think it helped, maybe? Here, look at these comparison shots. 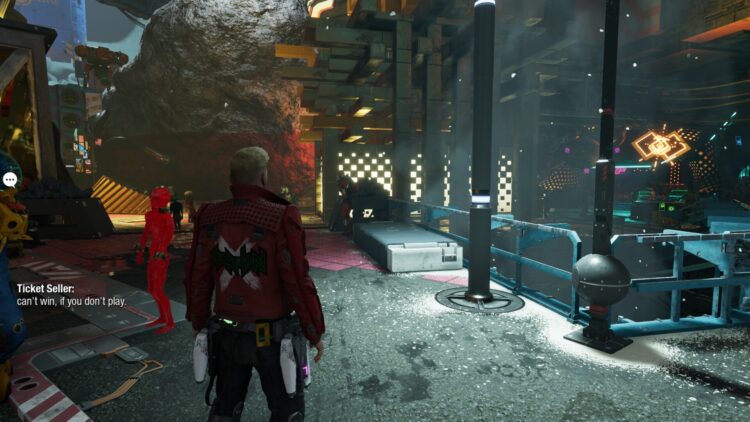 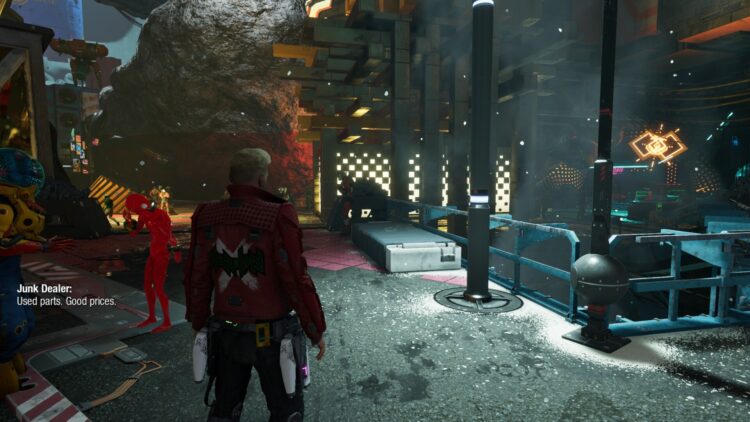 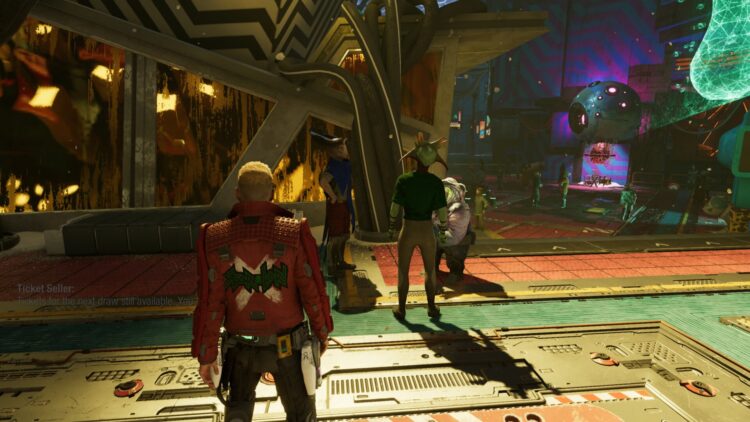 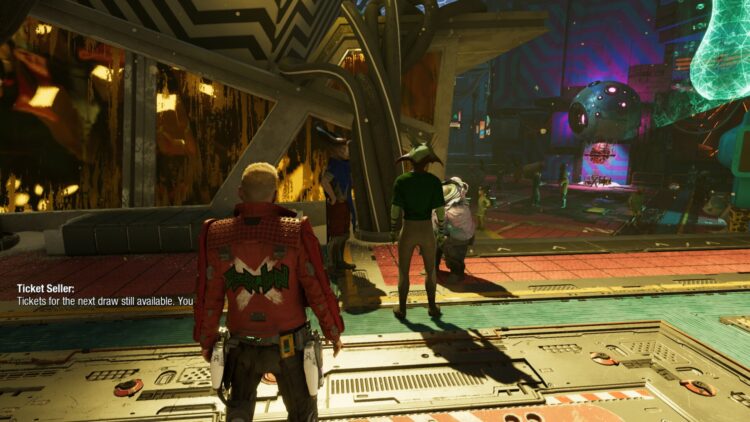 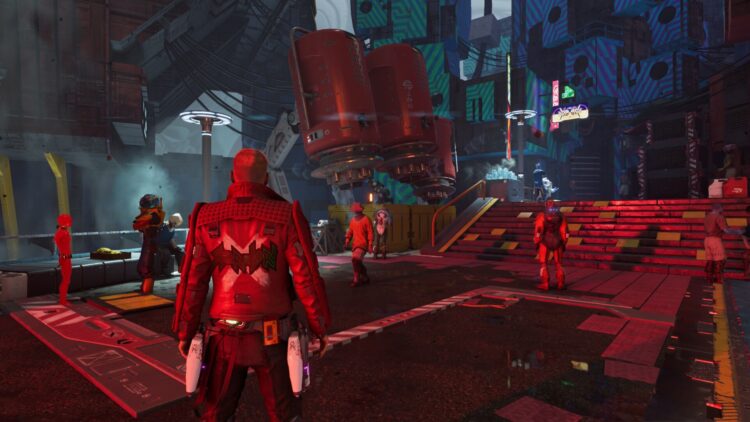 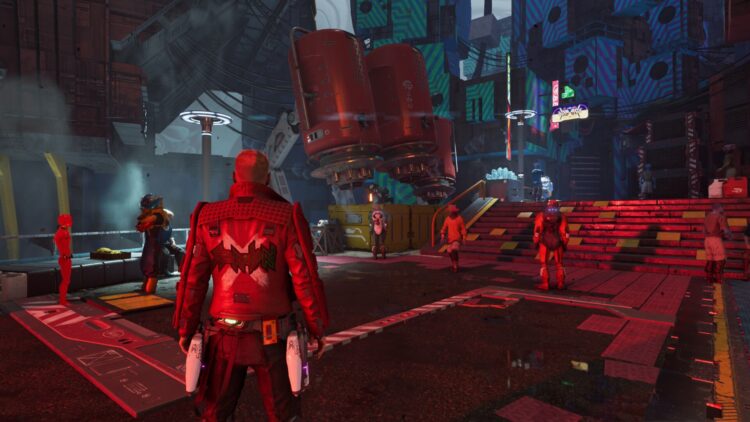 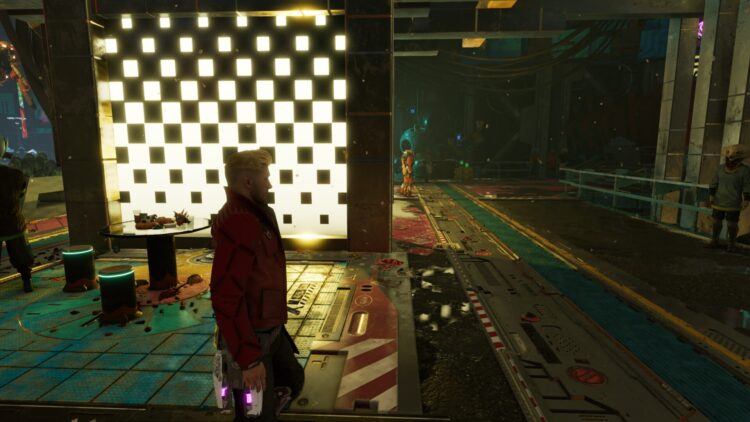 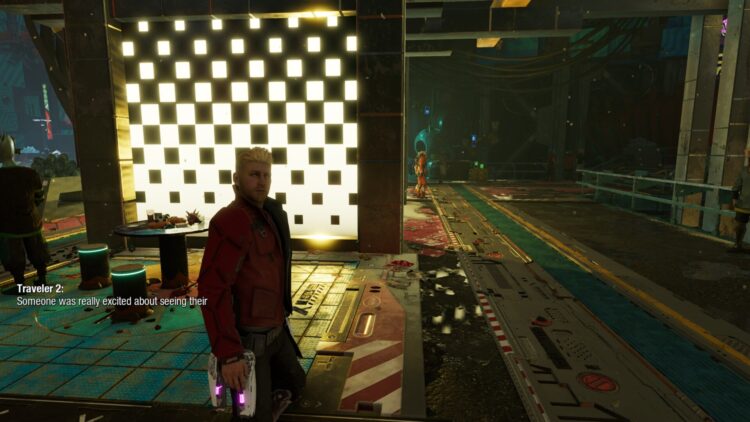 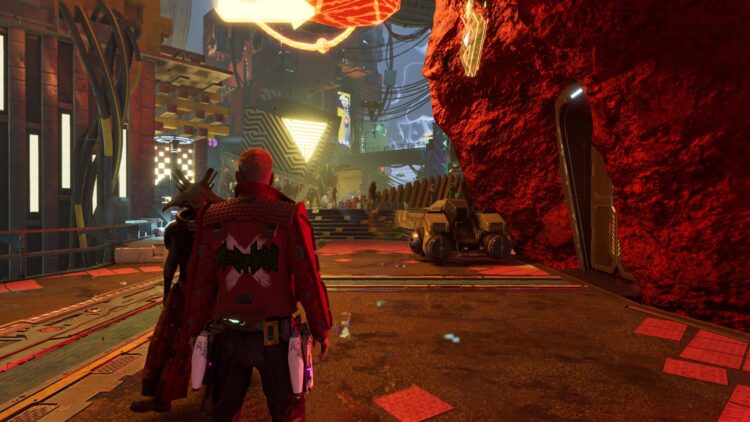 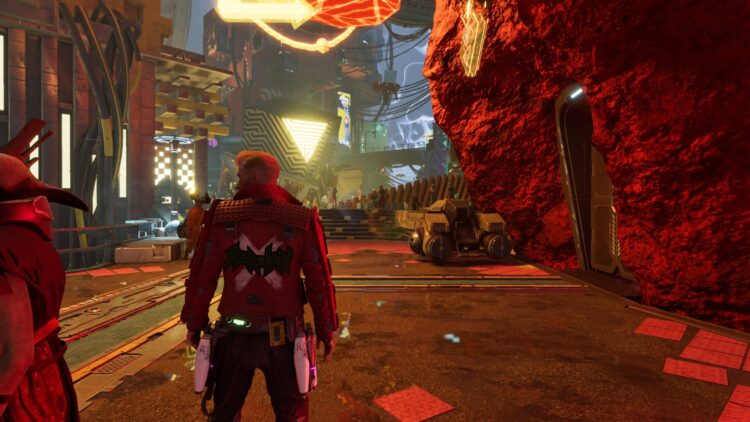 Another really good-lookin’ game, no matter what you do to it. Well, not Star Lord’s hair. That’s just stupid. And this is coming from a bald guy. Now onto controls. 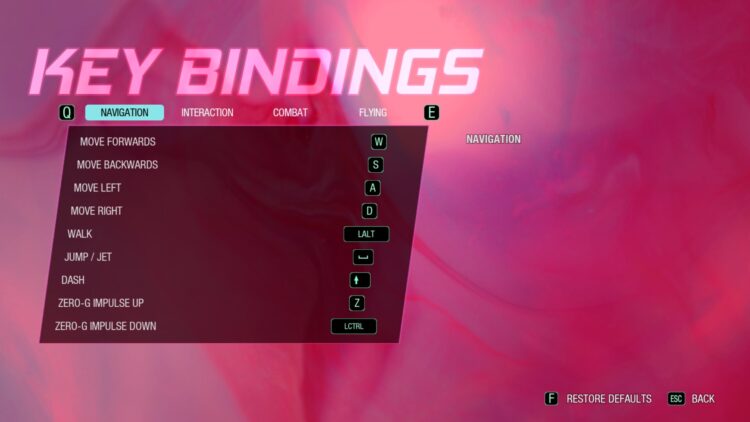 You can rebind all the keys on your keyboard and mouse. Standard, but appreciated. On controller you, uh, can’t rebind anything. Also kind of standard, sadly. Especially given the above stated “can’t scan with R2” issue. Maybe my controller just sucks. Anyway, it’s hard to say how good of a version this is until other PC players chime in and let us know if it happened to them too. Still, I was able to finish the game without issue, so at least there’s that.