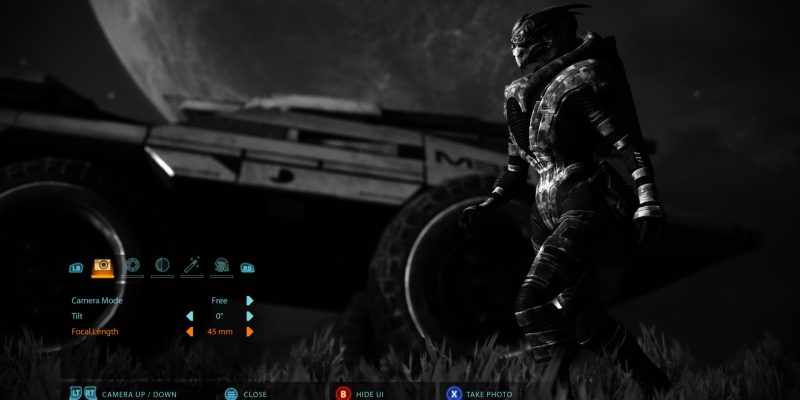 Mass Effect Legendary Edition is arriving on May 14, and with it, a ton of improvements to the original Mass Effect titles. Players can already look forward to quality of life improvements, like changes to the Mako in Mass Effect 1, and improved visuals. And what better way to let players drink in those high-resolution textures than with a photo mode. In addition to all the other features coming with the Mass Effect Legendary Edition, players can also look forward to a detailed photo mode.

The addition of a photo mode to Mass Effect Legendary Edition was revealed on Twitter by the game’s project director, Mac Walters. Responding to another user asking about a photo mode, Walters put up a picture of the feature in action. The screenshot shows Garrus walking across some alien planet in black and white with the Mako behind him. We can also see some of the photo mode’s UI here. The currently selected tab offers various camera modes, as well as tilt and focal length options. Right now, it’s hard to say what the other tabs could correspond to. One clearly has filter options, while the tab furthest to the right may change character appearances. We’ll just have to wait until Mass Effect Legendary Edition releases to actually find out what all these photo mode tabs do.

What else is coming in Mass Effect Legendary Edition?

Mass Effect Legendary Edition is going to be more than the Mass Effect trilogy with a photo mode. As I said before, the games have all been visually remastered with modern graphical techniques and higher resolution textures. In plain English, that just means that the game should look better almost all the time. Temper your expectations though, the games don’t look out of this world, just much better than they did when they originally released. Included in the package are Mass Effect 1, 2, and 3, and all of the DLC that released for them. Sadly, Mass Effect 3‘s multiplayer didn’t make it into the Legendary Edition.

We were just calibrating, but #MassEffect Legendary Edition will have a photo mode. https://t.co/QghTqwS4Ah pic.twitter.com/tfNKcgyplu