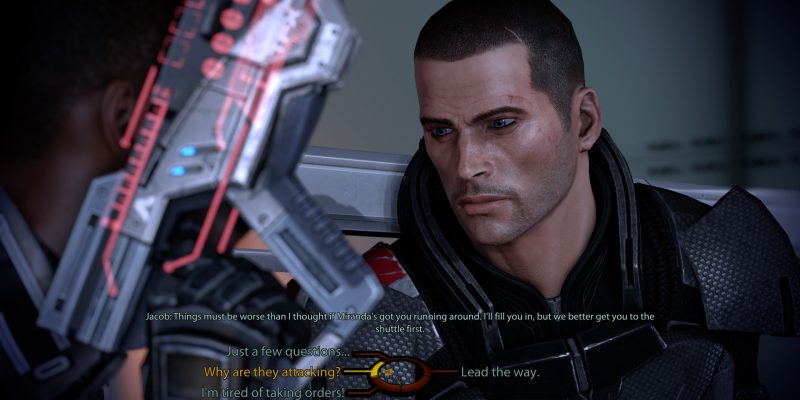 Welcome to the world of Mass Effect. Let’s just pretend that whole Andromeda debacle never happened, and reflect back on when the franchise was slightly more respected. Mass Effect Legendary Edition bundles together the three installments in the franchise that are actually worth a damn into the comprehensive Commander Shepard story. Considering this is the first time that all three proper iterations have been a part of the same package on PC, what’s not to like. Right?

Considering that this is the “Legendary Edition,” I was under the assumption that this would be the pinnacle Mass Effect experience, with tons of options to customize your experience. Sadly, I was very, very wrong. 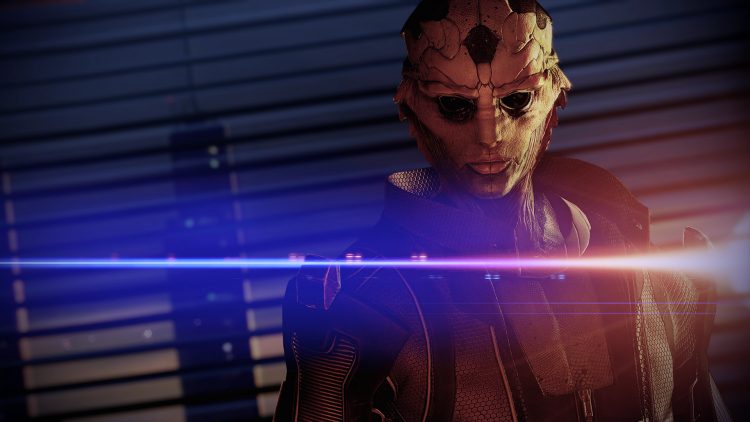 Despite a decent portion of the marketing revolving around the trilogy’s increased graphical fidelity, you’d hardly know it from the graphics settings. As you can see below, all three titles have very limited customization options. 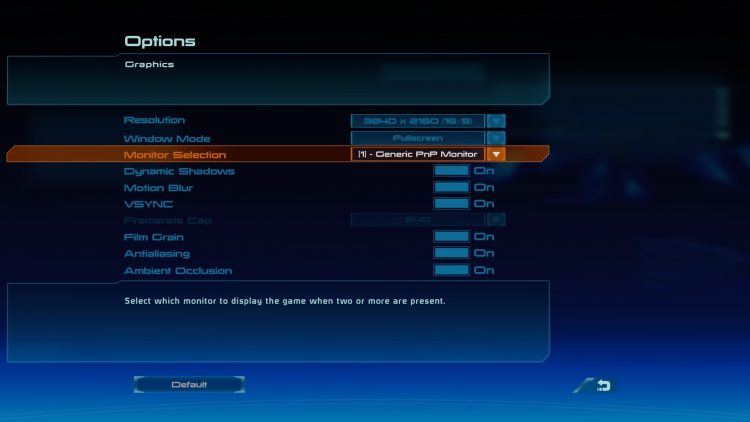 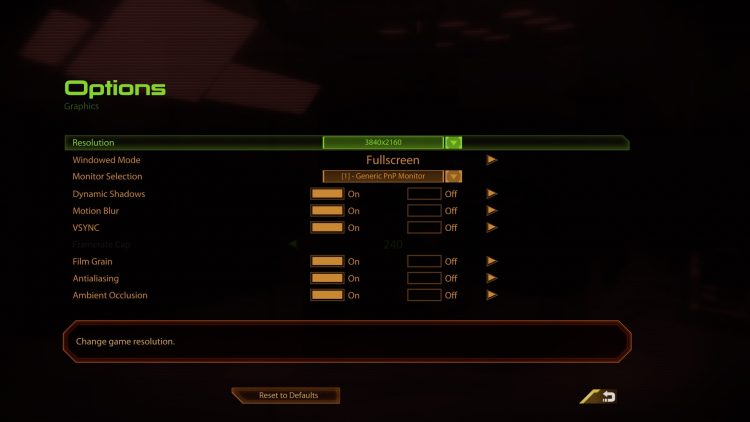 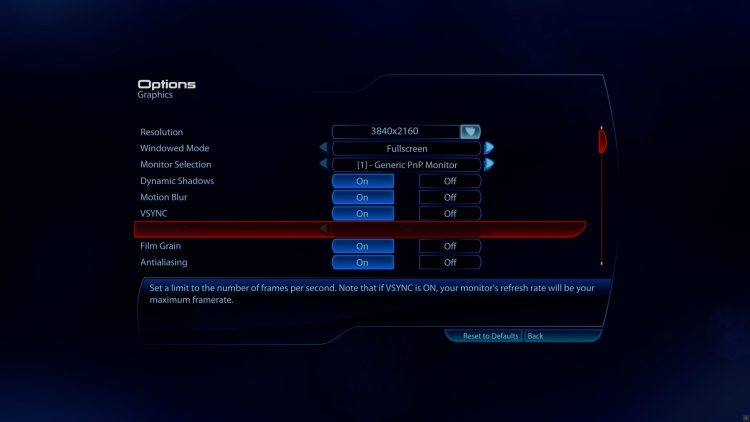 Of the tweaks that I was able to explore, I attempted to unlock the framerate on my GTX 1080. Unfortunately, a series of chained settings prevented that from being possible on my rig. For one, because I played on my HDR monitor, the game had VSYNC enabled by default. As far as I could tell, VSYNC and HDR were mandatorily chained to one another in order to ensure the best overall visual fidelity.

What I really wanted to do was compare the framerates of Mass Effect Legendary Edition when running at both 1080p and 4K resolutions. To pull this off, I had to disable VSYNC, which in turn meant that I also needed to disable HDR. All those things in mind, with HDR enabled, my ever-dependable GPU clocked in at a near solid 60fps.

I can only assume that turning off HDR also freed up a few spare machine cycles, because once I bumped the max framerate to 240fps in the settings, things started to get a little interesting. When playing at 4K, without the HDR bells and whistles, my framerate hovered between 73-88fps. After turning down the resolution to 1080p, this framerate skyrocketed to anywhere between 135-185fps. That’s not too shabby considering this GPU was the greatest technology that 2016 had to offer. 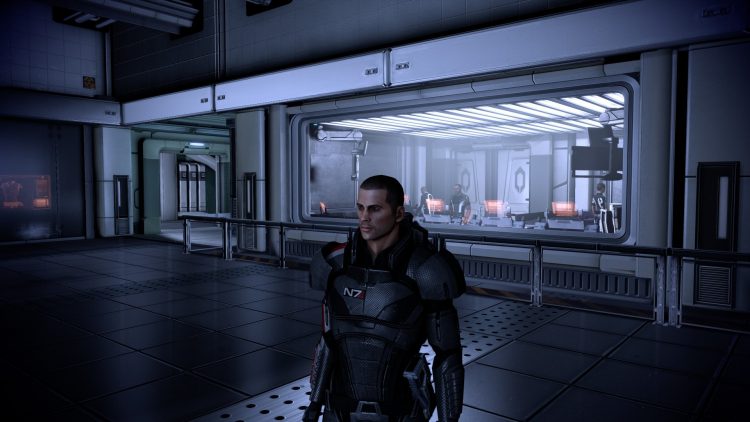 It’s worth throwing out there, despite the limited settings, that the game still looks great even if your PC can only handle the default settings. Even the original Mass Effect got a much-needed fresh coat of paint, which has been long overdue. Environments, characters, and animations legitimately spring to life thanks to all of the added detail. That said, especially with Mass Effect 2 and 3, the enhancements are much harder to eyeball in real-time. The one exception to this graphical tonguebath are the NPCs that you rarely interact with. It’s downright startling when you go from talking with one of your main party members to then interacting with other random NPCs on the ship. It’s almost like if the the game actually had texture quality sliders that went from 100% to 40%, just by changing who you’re conversing with.

Not the first PC rodeo

Despite the near non-existent graphics settings that weren’t even worth comparing side by side, that doesn’t mean that BioWare is new to the PC ecosystem. Hell, the whole series has made its way to the platform over the last 13 years. Probably the most straightforward demonstration of this experience is in the controls. I will fully admit to playing the original game on Xbox 360, so my default instinct was to defer to my controller instead of the keyboard and mouse. Much to my surprise, once I tried the keyboard jockey controls, I was in love. It’s genuinely hard to put my finger on what made it feel so perfect, but the fact that I was able to switch between both schemes with relative ease speaks volumes to the intuitiveness of all controls. 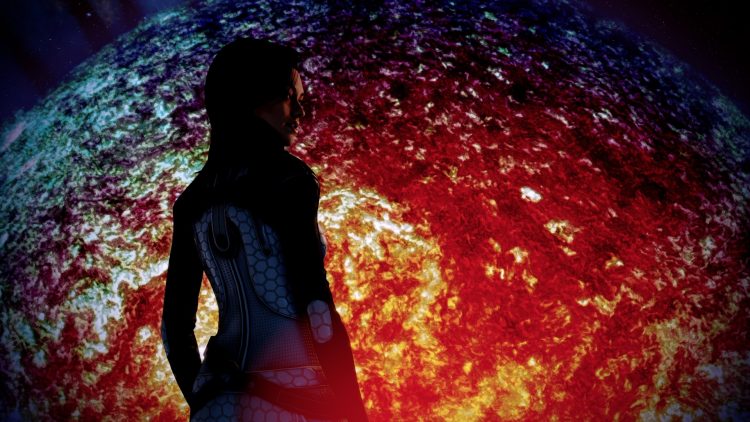 One final item of note is the game’s install size, which clocks in at a massive 120 GB. Even scarier yet, that doesn’t include the inevitable avalanche of patches that are undoubtedly in the pipeline. As far as I could tell, there didn’t appear to be any way to install any single game. It seems that this is an all-or-nothing situation we should just accept and move along with. Thankfully, it appears that part of the reason for the install bloat is the inclusion of over 40 pieces of legacy DLC. If you’re looking for that complete experience, this is about as close as you’re going to get.

While the Mass Effect Legendary Edition does seem like a sizable offering, it’s hard to shake the feeling that this is a cash grab. Why else would the graphical options be so barebones? If you’re looking to take the franchise into the future, this may not be the way to go. However, if you’re longing for the nostalgic franchise of old with a generous amount of intergalactic spitshine, then you’ve come to the right place.