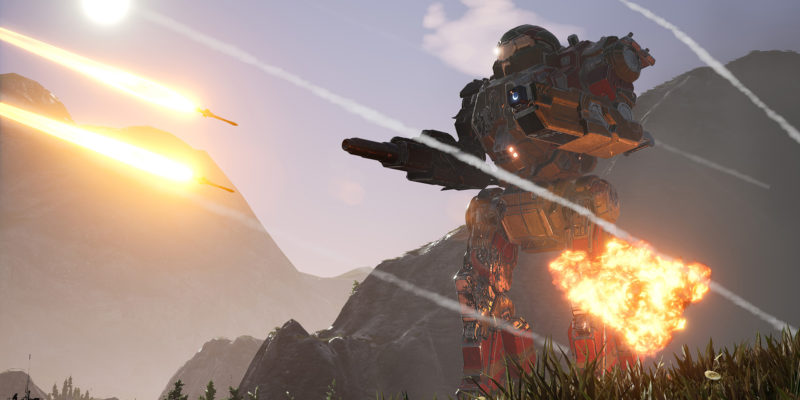 MechWarrior 5: Mercenaries is fast approaching. It’s going to be the first single-player MechWarrior game in almost 20 years. That’s far too long. In anticipation of the release, Piranha Games released a gameplay trailer today showing off the upcoming game. The video begins with a Shadow Hawk Mech stomping through and destroying an objective during a mission before it is picked up by a dropship and returns to orbit, after which the trailer goes on to explain Mech customization and the star map.

Although it’s always fun to stomp around and just wreck everything with lasers and PPCs, anyone who played the original MechWarrior games can tell you that one of the most exciting parts of the game was what came in-between the missions. There, you spent time outfitting your Mech and deciding what chassis, armor, weapons, and utilities you wanted to bring with you to battle. It was a geek’s paradise.

In the walkthrough, Piranha Games shows off the dropship Mech bay. After the Shadow Hawk takes some serious damage, the player purchases an Atlas. They throw on a nice old ballistic weapon (AC/20) and get the big boy ready with a little repair and customization. Players can apply a primary, secondary, and tertiary color to their Mech. So you can leave destruction in your wake as a bright pink Atlas. Or you can opt for a more immersive Inner Sphere paint job.

MechWarrior 5‘s star map allows you to jump from system to system in search of contracts. You can hire pilots, purchase new Mechs, or seek repairs. You can also see conflict zones that have lucrative missions for you to undertake.

Combat is still an important part of the game. In MechWarrior 5, players will battle enemy aircraft, tanks, and Mechs. Your typical MechWarrior mainstays will make their appearances, such as lasers, ballistic weapons, and missiles. A new, immersive aspect of the game is the destructible environments. Is a big tower blocking your line of sight to the enemy? Blow it up. Do you need to destroy an enemy factory but you’re out of ammo? Stomp your 100-ton Atlas through it. The idea of Mechs duking it out as structures crumble down around them is extremely gratifying.

MechWarrior 5: Mercenaries launches on December 10 as an Epic Games Store exclusive. If you’re a big lore fan and you want to get primed on the story in the upcoming game, check out the free epub novella “The Calm of the Void” that released today.

Half-Life: Alyx is the VR-exclusive prequel to Half-Life 2