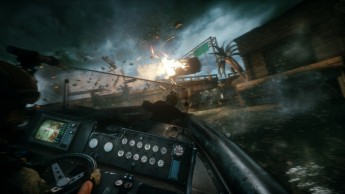 EA has shown off a spot of Medal of Honor: Warfighter gameplay during its E3 2012 conference. The sequence showed some single player action as you (and your fellow ‘Tier One’ squad-mates) advance up a beach towards a bombed out city. There was plenty of incoming fire (scripted, naturally), prompting the player to duck under a handy nearby pier.

Later, the action moved to the streets, with the usual use of iron sights, a bit of grenade lobbing and plenty of ducking behind a series of ruined walls. EA showed off a ‘door breach’ feature, which was followed by some bullet time-esque slo-mo gun play. After that, the mission switched to beneath the city streets, in a darker, enclosed space.

It was reiterated that Warfighter’s multiplayer will let you take control of one of 12 ‘Tier One’ (ie; US Navy Seals, British SAS) soldiers from one of ten different nations.

Footage from the conference, below.

Once you’ve watched that, have a read of our preview of the game.