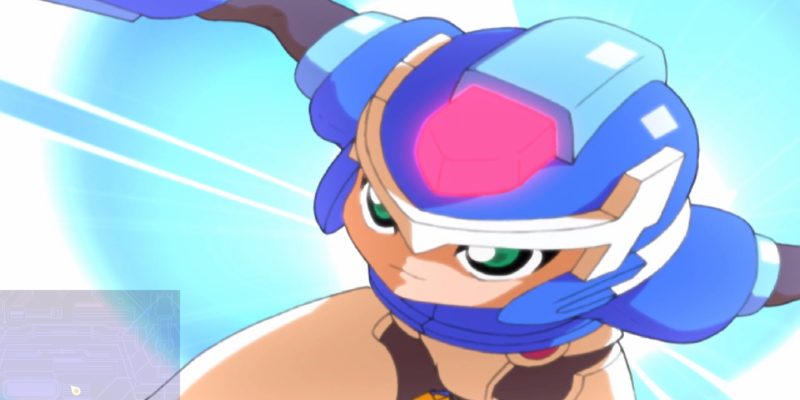 When Mega Man Zero/ZX Legacy Collection was announced, I was immediately excited. Not only do I consider that subseries to be one of the finest in the pantheon, but I was intrigued by the promise it held. As the original games were on handhelds, simply slapping some ROMs into a collection and blowing them up wouldn’t look all that great. To me, that meant it was possible that we’d actually get some ports that supplied us with superior versions of the games.

Unfortunately, that isn’t what we got. Mega Man Zero/ZX Legacy Collection comes with six great games, and while these are surprisingly ports, they don’t come with the superior assets that you might assume they would. There are some slight differences, and having the entire subseries not only in one place but with a few surprisingly thoughtful adjustments still makes this a good buy for anyone who hasn’t jumped into the series before. So, without further ado, let’s dig into exactly what this collection is offering and how you’ll access each of the titles.

Upon starting Mega Man Zero/ZX Legacy Collection, you’re immediately given a choice between the Zero and ZX games. There are four games in the former and two in the latter. The Zero games were Game Boy Advance games, while the ZX entries were on the Nintendo DS. On account of that, there are a couple of differences between the way this collection handles both. 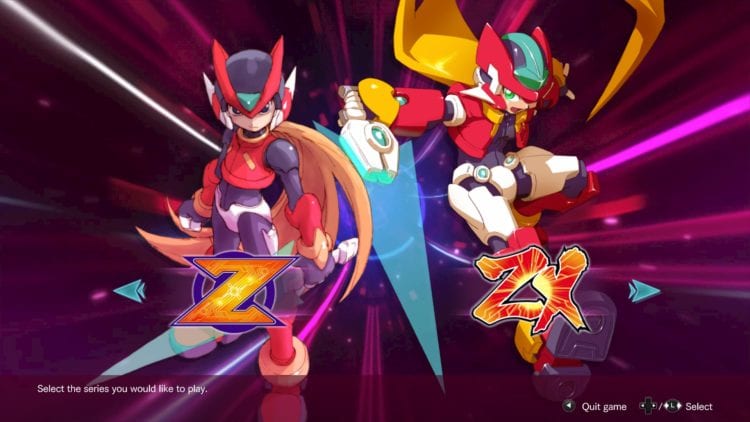 The menus are pretty neat, honestly. The art is all high-resolution, so it really gets you into the mood for some dashing and slashing.

Once you make your choice, you’re taken to submenus for each as well. 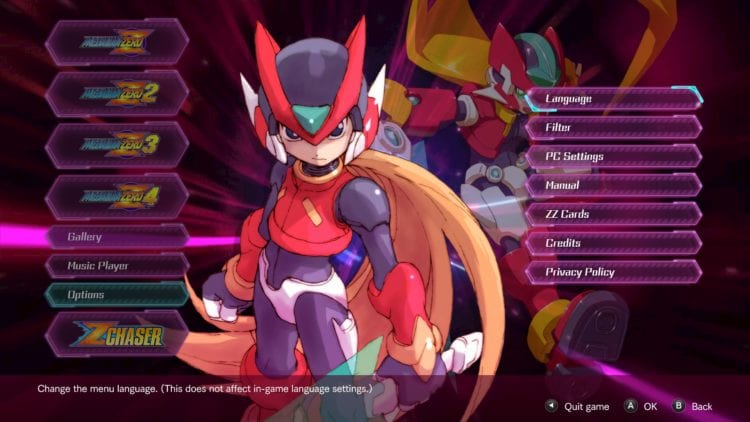 Both menus share certain options, with most of them being very general. You can change the text language to a variety of different ones if you’d like, and each game has a manual that tells you what the default controls are. It’s worth mentioning that you can’t change the controls themselves from the main menu; you can only alter them from the menus within the individual games. These menus have also had the button icons updated, which is the extent of the graphical changes you’ll see in the games themselves.

One of the more important options is in regards to the filters. There are only actually two to choose from, if you want one at all. The Type 1 filter is exactly what you’d imagine. It smooths out the pixels considerably, which can make the art look simultaneously better and worse. Type 2 is a CRT filter, which adds scanlines, noise, flicker, and some less mild blurring to evoke an old TV. I’m not too sure why this one’s here, as both Game Boy Advance and DS had LCD screens and no one originally played them on CRTs outside of using that one piece of GameCube hardware. 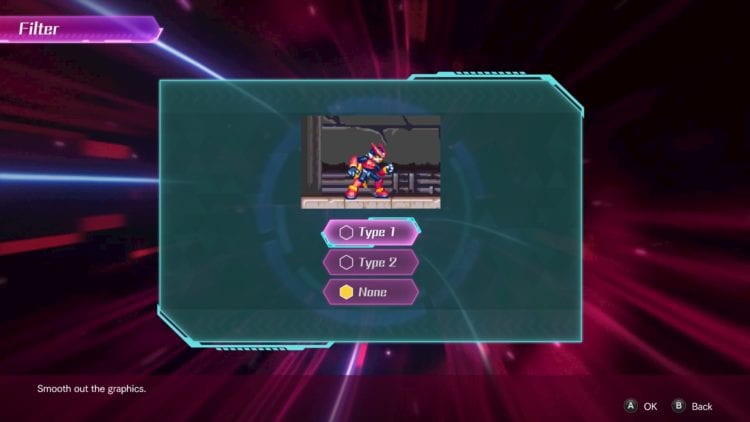 Then we just have the standard suite of screen options. You can choose your resolution, whether you want the game windowed, and if you’d like to enable V-Sync. Not much to say here. 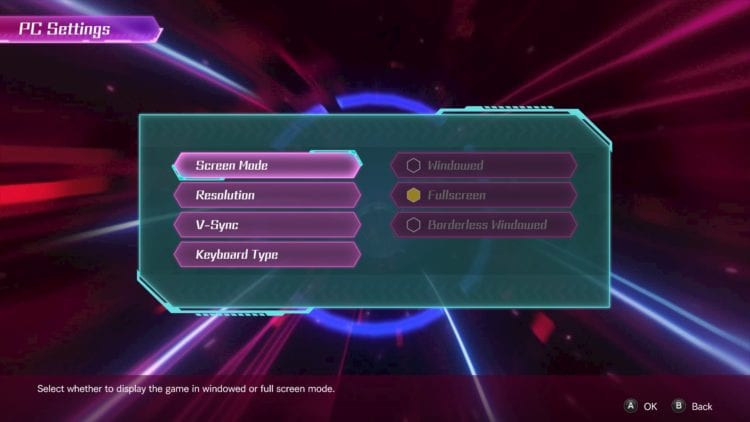 The game is afoot

Once you actually start playing a game, you can access the Mega Man Zero/ZX Legacy Collection menu itself at any time. It’s a bit different and has a few more options. 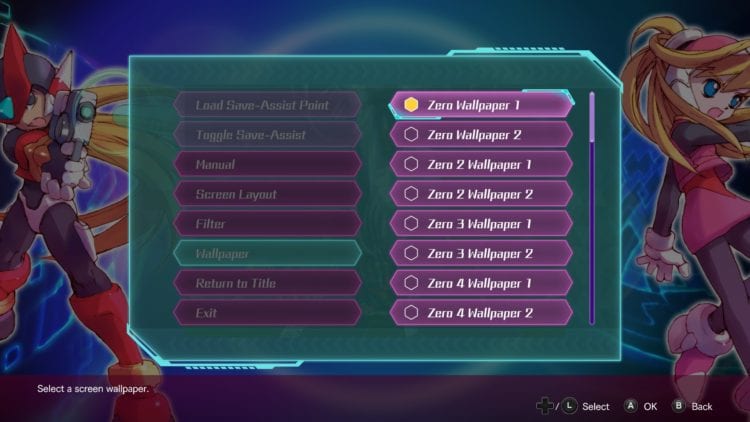 The two biggest additions on this menu are the screen layout and wallpaper features. Screen layout lets you choose just how much you want to blow the games up. You can relegate the game to a box in the middle of the screen if you’d like to have it look more accurate to the original releases. You can also naturally match your monitor’s resolution while maintaining the original aspect ratio. Regardless of which you choose, you can fill in the spaces that the game doesn’t take up with wallpaper. 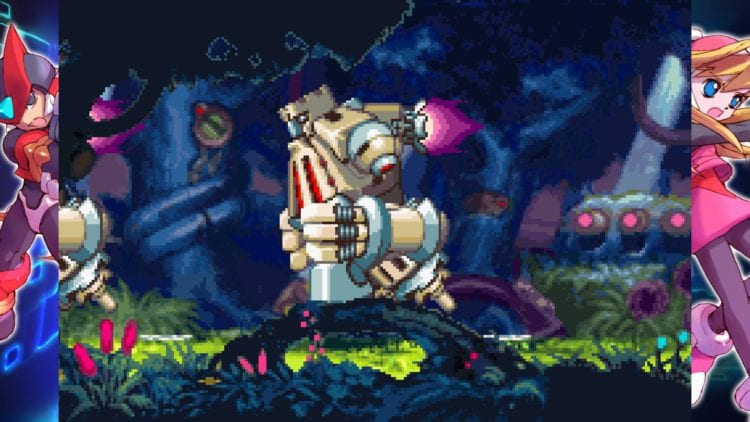 Of course, you don’t even have to bother with wallpaper if you don’t want to. You could instead just stretch the game to fit your screen. Here’s what that looks like, along with comparison shots showing the different filters in action. 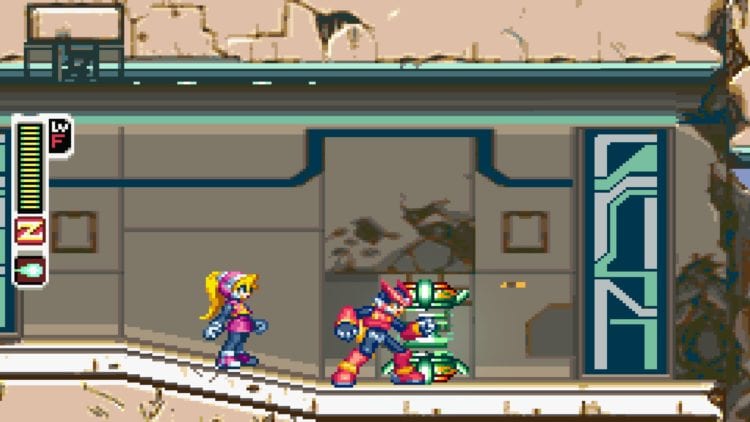 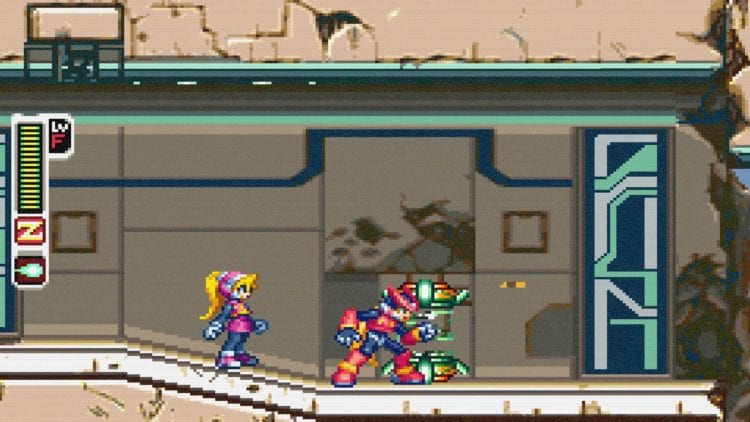 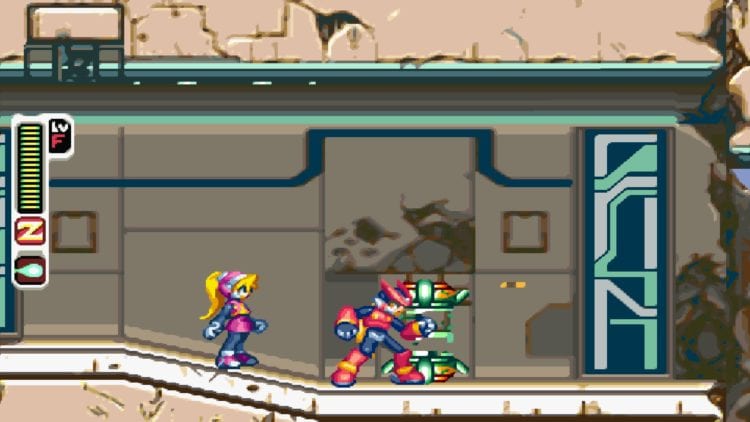 The first screen is the game without a filter, while the second is the CRT filter, and the third is blurred. Which one you like best will obviously come down to personal preference. While, again, the CRT filter being here doesn’t make much sense, it still looks okay, and adding the grain and flicker can help cover up some of the obvious scaling issues a little bit. That said, I still think the blur is probably the best way to go if you’re using a larger screen that you’re several feet away from. People sitting right up on their monitors will probably be better off making the picture smaller, though.

One of the more pressing questions I had in regards to Mega Man Zero/ZX Legacy Collection pertained to just how it would handle the second screen in the DS games. Thankfully, that’s done extremely well here, all things considered. Much like the GBA games, the DS ones give you several choices of screen type. All of these contain both screens.

The amount of options for this is actually rather laudable, I’d say. You can stack the two screens on top of one another to resemble the DS layout. You can also have the top screen take up the majority of one side of the screen while having the bottom screen squeezed into a corner, with unused screen space above or below it. My personal favorite allows you to fullscreen the top screen and place the bottom one on top of it in either the left or right corner. You can then increase or decrease the size of the bottom screen.

As you’re likely aware, though, the bottom screen had touchscreen functionality, which is also included here. If you’re playing on a controller, you can use the right analog stick to interact with it. If you’re not fond of the second screen at all, you can also turn up two levels of transparency that make it see-through. Tucked in a corner of the screen while transparent is my personal preference. 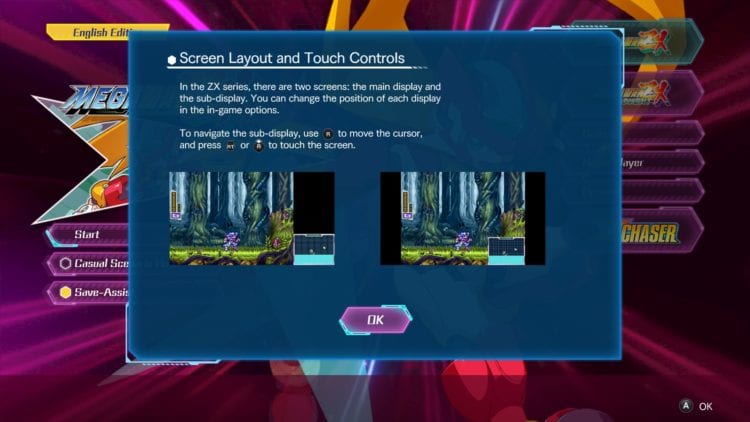 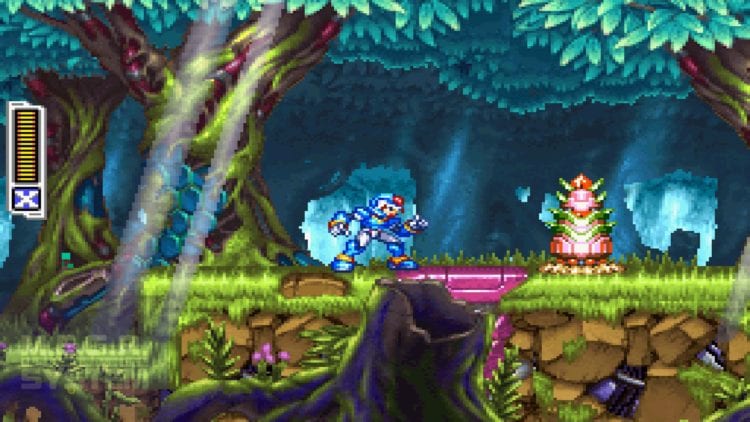 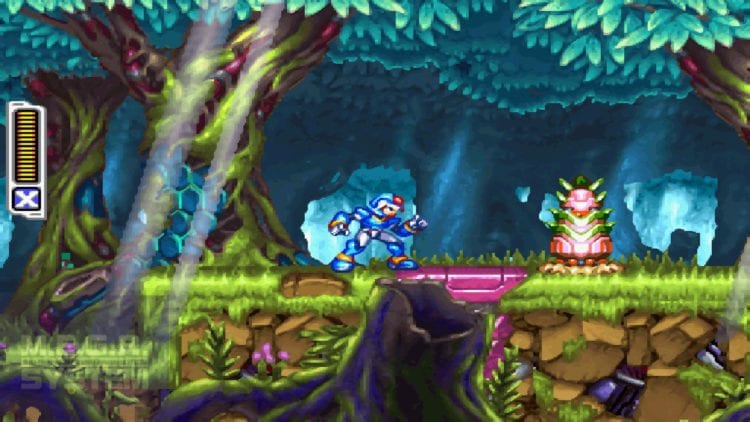 Of course, there are a couple of remastered elements on display only in the ZX games. If you’re familiar with the series, you likely recall that it had some full-motion cutscenes. Somewhat surprisingly, even though Capcom didn’t see fit to update any of the visuals for the game proper, they actually included what are apparently the uncompressed versions of the cutscenes. This is a welcome surprise, as the DS versions would be so artifacted it’d possibly make a person’s eyes bleed. 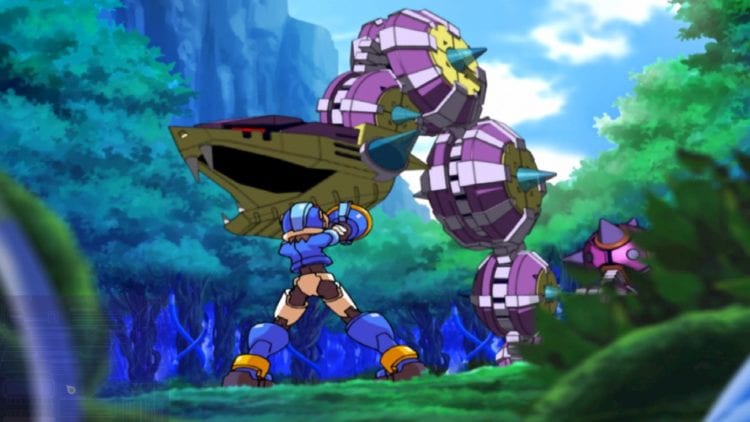 It’s pretty cool seeing these in such good quality after years of only seeing them on a DS screen.

The cutscenes look fairly good, to boot. On top of them, ZX also has uncompressed versions of the voice samples. You can choose between the original or mastered versions from the menu, which is a pretty neat little extra that aids in making this likely the best release of these two games. That said, there are a couple of occasional technical issues. Specifically, there can be a bit of slowdown in certain sections and there’s a bit of input lag, but nothing insanely severe. The games all remain perfectly enjoyable, but that’s worth keeping in mind.

So, there you have it. Mega Man Zero/ZX Legacy Collection won’t blow you away if you were expecting Capcom to actually port these games. But these are excellent games, and being able to have them all in one place like this is really nice to have. The graphics haven’t really been changed, and the only real gameplay changes are for convenience, being optional extra checkpoints and a casual mode that will make these famously tough titles more palatable to casual audiences. If you want to play these games again, this is likely the best collection we’ll ever get.