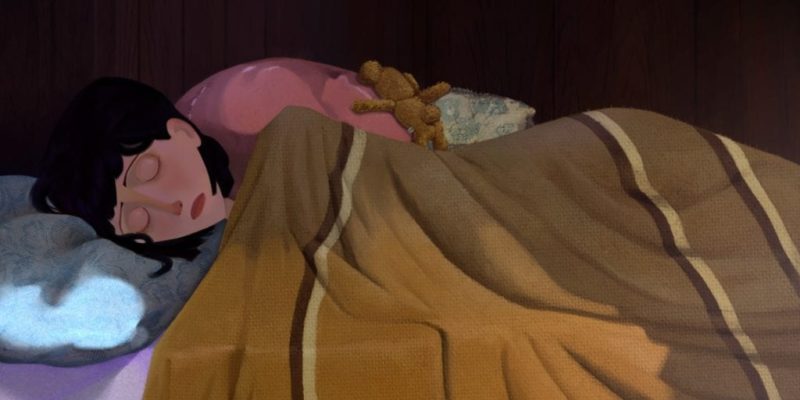 Memoranda, a Kickstarted adventure game inspired by the short stories of Haruki Murakami, shows that while Magical Realism may be a terrific style from which to pluck characters, it can cause some structural problems.

For those unfamiliar with the term, Magical Realism is literature’s equivalent of the videogame Rogue-like; it has a broad definition, and people will argue endlessly about whether an author or book fits into the category or not. Basically, it’s when strange or unusual events bleed through into an otherwise realistic setting, and the inhabitants of the story treat this as completely normal. If a talking cat shows up, the characters tend to simply talk to the cat rather than exclaiming “holy shit that cat can talk, what is going on here, am I losing my mind?”

It’s not quite a case of ‘anything goes’, but you can imagine how carefully an adventure game’s puzzles need to be constructed in a world where the bizarre is commonplace. 1993’s Sam & Max Hit The Road got this (mostly) right. Memoranda has some difficulties. 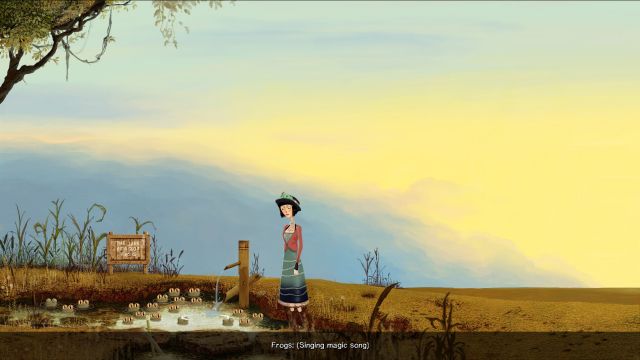 Magical Realism in a nutshell.

It’s been a few years since I read a Murakami novel (Wild Sheep Chase and Kafka On The Shore are good choices for anybody curious about his work), but his influence is certainly felt throughout the game. Certain aspects and characters are direct references to his short stories, including a missing elephant, a chap named ‘Superfrog’, and the abundance of cats. Not being as familiar with his shorts as some of his novels it’s hard to say for sure, but it’s safe to assume there were more references I didn’t pick up.

The only Murakami trait arguably missing is a whole lot of 1960s jazz and pop records; though an indie studio can easily be forgiven for skipping this expensive indulgence. Instead, Memoranda has an unobtrusive ambient score, full of extended tones which evoke a dreamlike, slightly off-kilter state. In part, it reminded me of softer tracks from Ice-Pick Lodge’s The Void, another (albeit very different) game where the player is bombarded with strangeness.

Memoranda is much more down to earth than Ice-Pick’s hellish afterlife, taking place in a sunny, coastal town of cafes and cottages. But it retains a feeling of underlying melancholy, both in its cast of odd characters beset by obsessions and problems, and in the spidery, slender frame of its protagonist Mizuki. She’s a lady troubled by a serious lack of sleep, unable even to retain a grasp on her own name (we know it though, thanks to the subtitles). 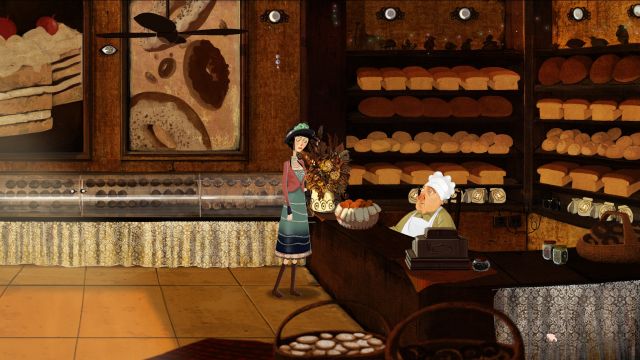 Luckily she can still remember how to obtain delicious pastries.

The re-discovery of Mizuki’s name provides the main impetus for Memoranda, though simply walking around and interacting with the town’s bizarre citizenry is a convincing secondary incentive. I’m a big fan of The Dabchick, an aquatic fowl in a suit who helps to transform others into human-animal hybrids, and who may be involved in organised crime (at the very least, his business is operating outside of normal legislative boundaries). A pair of morally ambivalent talking owls also make a good impression during their short cameo, and showcase an amusing range of human-created hooting sounds.

But while there isn’t too much to criticise about the game’s presentation (the voice-acting falls victim to mic hiss at times, that’s about it) or use of Magical Realism as its stated inspiration, it makes some pretty fundamental adventure game mistakes.

Points of progression are often arbitrary, relying on specific actions or Mizuki’s return to certain locations in order to advance the plot and open up new areas of the game. Twice, this hinges on returning to a screen outside of Mizuki’s house; an area you can’t immediately jump to with the map’s (otherwise extremely helpful) fast travel system, and one which you’d almost certainly have no other pressing reason to revisit. Nonetheless, showing up there makes Mizuki see the new issue of a magazine (denoting time passing, pushing the plot further), and, later, introduces a completely new, one-off character offering a plot-critical item for no particular reason.

You can never trust that you’ve exhausted the possibilities in any given location, because it’s quite possible that a new point of interaction or new character may just show up there out of the blue. This undermines any attempt on the player’s part at methodical progression, and gives aimless wandering between locations the same mechanical value as applying thought to inventory items and clues. 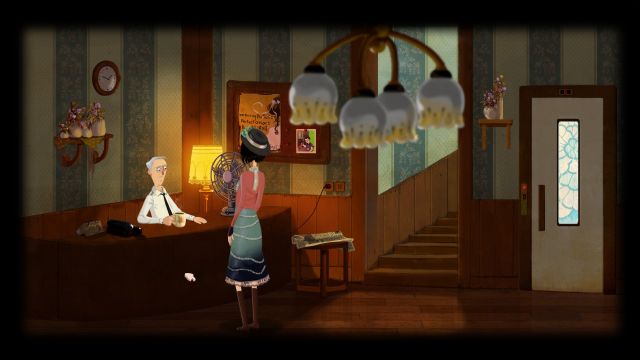 If you play Memoranda, check outside this apartment lobby a lot. For your own sanity.

Objects are inconsistent in their disappearance from the inventory. Once they no longer have any further use in the game, they tend to vanish. But not always. This leads the player to wonder if a particular item will have a second function, or whether it’s just one of the ones sticking around without purpose.

Memoranda also manages to include some mini tasks and tacitly highlighted points of interaction which wind up serving no function. A request to find somebody’s cat ends up going nowhere (you do come across the cat, but Mizuki seems disinclined to return it – only later do you realise this isn’t actually a prompt for further action), and, later, a Komodo Dragon shows up for no apparent cause nor effect.

Some of Memoranda’s dialogue reads as if it has been sent through the filter of a second language. Unusual grammatical constructs and word choices can add to the slightly otherworldly feel of the game in a positive way, but they don’t always help with the dissemination of audio or written clues. Mizuki has a limited number of stock ‘this won’t work’ responses, all of which will infuriate you by the game’s end, but none more than the one along the lines of “that doesn’t make any logical sense”. I’m pretty sure using a cloth flag (“could still be used for cleaning”) on a dusty window (“I wish I could see the other side”) does, in fact, count as fairly logical. She even gives you anti-clues at times. One particular item prompts a “I don’t want to give this away to anybody” response, despite the fact that is precisely what you need to do.

The key conflict at the heart of the game is this: many of the game’s puzzles (and indeed the general theme), do not revolve around standard actions. Point and click adventure games are notorious for obscure solutions, and Memoranda practically codifies this approach by basing itself in Magical Realism. Combining this with an arbitrary structure of progression and some unclear clues begets almost crippling frustration. 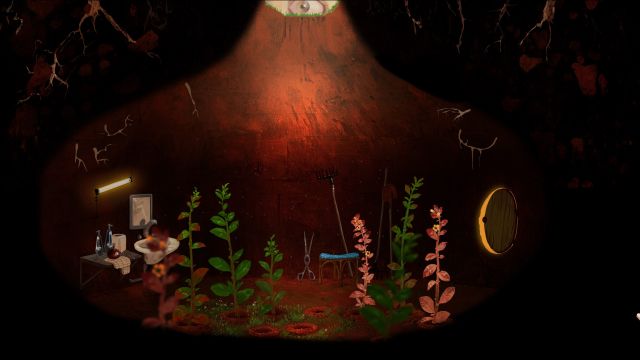 Developers Bit Byterz have stated their intent to add both an object hot spot system and layered hint system to the game, but these have not yet been implemented at the time of writing (two days before release). The hot spot system will be essential, because there’s not a whole lot making objects of interaction stand out from the background art, and some items are outright hidden. Frankly, a hot spot toggle is such a staple of modern adventure games that it shouldn’t have required user feedback to get it included.

Hints will obviously help too, but they’re going to be a bit of an ineffective bandage for the main wound. The problem is that certain puzzle solutions are borderline impossible to deduce from observation and audio/textual clues. Having access to a feature that will gradually tell players the answers will allow them to progress beyond these sticking point, but it won’t do anything to improve the actual design of the puzzles themselves.

Memoranda has capably replicated the strangeness-as-the-everyday feel of Magical Realism, presenting a point-and-click world full of unusual characters and off-kilter situations. Unfortunately, it struggles to reconcile the oddities of its coastal town with the necessity of providing clear clues and logical steps of progression for its puzzles. The promised addition of hot spots and layer hints will only be able to go so far in alleviating these structural design problems. Too often, this homage to Murakami sends frustrated players on a Wild Sheep Chase for a solution.