What I consider to be the traditional style RTS title, so in vogue twenty years ago, is frustratingly not as popular with developers these days. Games such as Command & Conquer and Starcraft were smash hits, but as developers became more adventurous with the genre much of the core gameplay that makes up the traditional RTS has disappeared.

A few games still have a crack at reviving the genre though, and one of those games is called Meridian: New World. Operating under the name Elder Games the studio behind Meridian is not your typical developer. It’s really a one-man operation consisting of Ede Tarsoly, and what he’s managed to produce so far is quite impressive.

Meridian: New World follows the story of commander Daniel Hanson who’s been sent on a mission to a planet called, none too surprisingly, Meridian. He’s on a scouting mission with his crew and once that’s complete he can head home. Of course it’s never that simple in games. Just as Hanson is about to return home there’s a distress call, and suddenly a whole undiscovered group of bad guys appear, all of them determined to stop him. He’s now stranded, low on fuel and there’s dissent in the camp. There’s only one way out and that’s to fight. 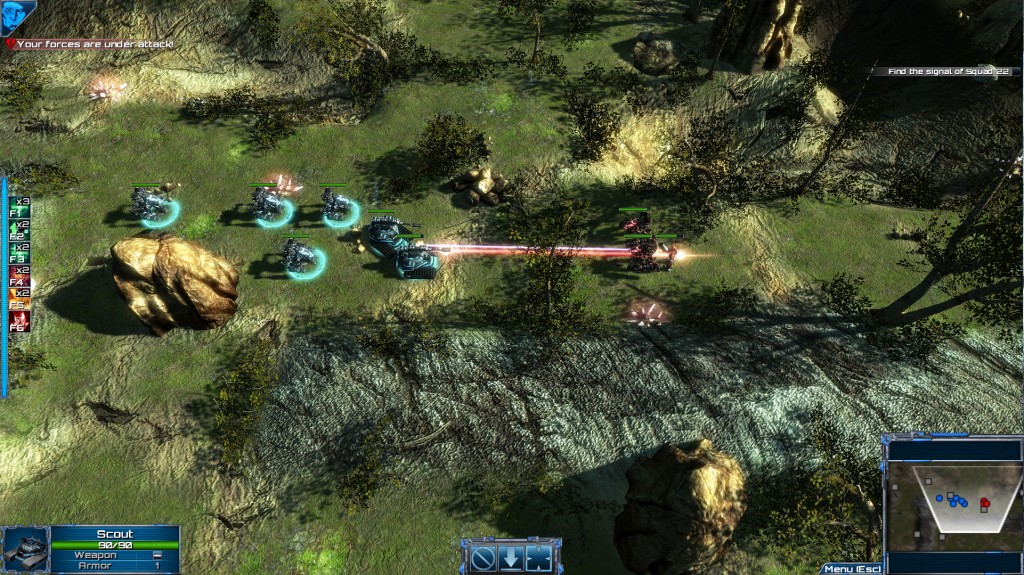 Scouting we will go.

The RTS sections are the core of the game, but there’s also an RPG-like subplot between missions where players are placed firmly in commander Hanson’s boots on board his ship. It’s during these segments that you learn more about the crew and why things are not going quite to plan. Players gather bits of information themselves by wandering around the small ship interiors via a top-down view, which is a nice touch. There are only a few choices of dialogue when talking to crew, but it works well and beats using cut-scenes. 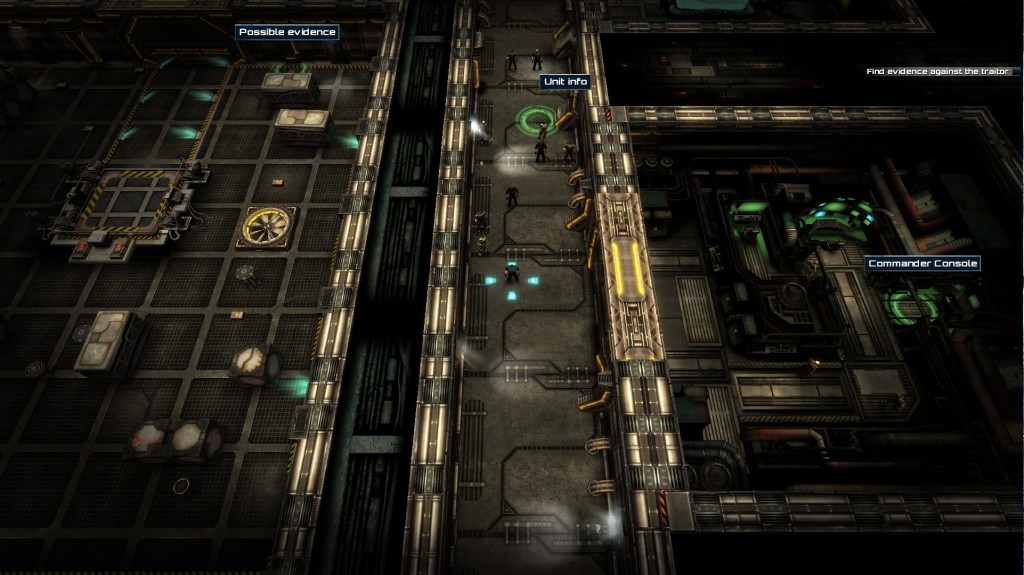 On the ship there’s stiff to investigate. Who is the traitor?

Like all good RTS games, Meridian: New World tells the bulk of it’s story through the missions. Ede has taken the traditional route of teaching you to play the game through the missions, which slowly ramp up in difficulty. Early stages introduce you limited base building and structures, as well as a handful of units with orders to perform basic scouting operations and find out what’s happening on the ground. It’s everything you’d expect to find in an RTS.

There’s definitely a nod to Starcraft and C&C here too. The main resource is called Shardium and it’s mined in the same way you would in Starcraft. Meanwhile, I’d say the crunching guitar score has been inspired by C&C. Little touches like these make you feel right at home with the game mechanics.

One feature that is slightly different to traditional RTS games is the special commander abilities and path to leveling up. I’m not a huge fan of individual units having multiple abilities (too much micromanagement,) so this is alternative way to introduce special powers into the gameplay while making you feel like you’re in command. As missions progress, commander XP is earned and points can be placed in the commander ability tree. Here, there’s everything from faster production and healing units to mass explosions and electrical damage attacks. These abilities cost Energy which is indicated by an on-screen bar that ticks up over time. It’s essential to use them correctly in order to complete some of the tricky missions; they saved me on more than a few occasions.

With Meridian still in development it’s worth pointing out a few things that are a problem. Despite there being two sides in this war they share the same units, so you’re always fighting against units you know about. This offers few surprises in the campaign so it lacks any kind of “WTF is that?” moment as the missions progress.

With only a handful of units in the game, unit diversity is handled by providing a single basic unit and then allowing the player to change the weapon said unit is constructed with. That means there’s no single-click action to build a unit. Instead, you select the base unit, select what weapon to attach to it (assuming you’ve researched it of course,) and then add your creation to the build queue.

While this is not a massive issue, it feels like a rather cheap way of offering unit variety. All that’s essentially happening is a unit is dealing more or less damage depending on what you shoved on it. Rockets, for example, will do more damage than lasers. This decision was almost certainly down to there being one guy working on the game, but anybody hoping for a broad unit roster will feel a little short changed at this point.

Plonking buildings down is easily done by equipping your Chimera units as builders. It’s typical RTS base construction really, with options for power, mining, storage, defense turrets, factory, research and the like. Any older RTS players will understand how it all slots together with no problem, and this is one aspect of the game that feels quite solid. 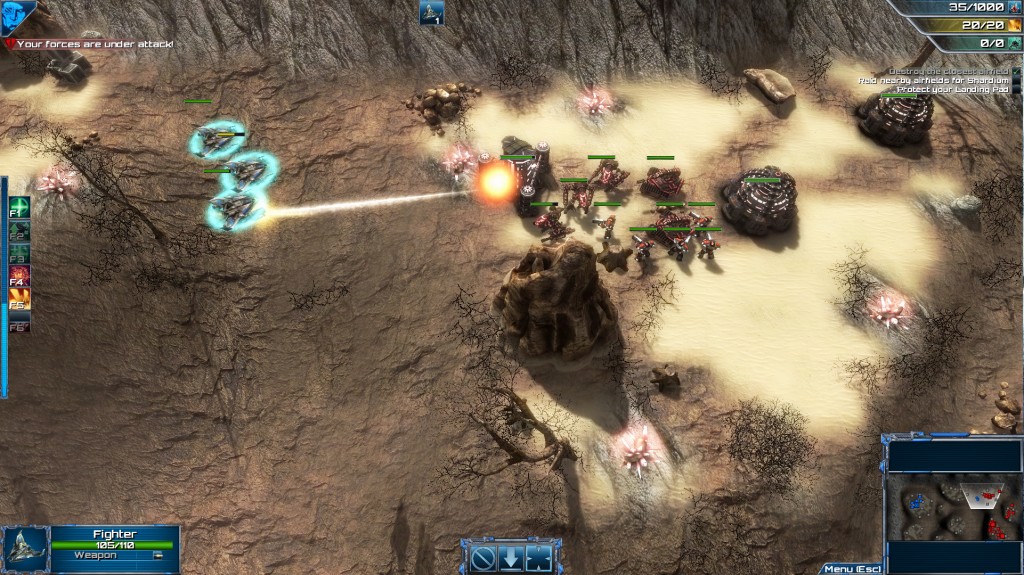 There are some weird building issues though, like why would the numbers of mines you have determine the “food cap”? And while I’m on the subject of unit caps, why have them? They are one of the features I can’t stand in later RTS titles. Games like Red Alert managed fine without having a cap. If I manage to mine more resource, I should be able to build as much as I want. Perhaps it’s just me, greedy bastard that I am, but I much prefer to play an RTS the way I want to and not have the game dictate how much I can utilise.

Having played through the available missions in Meridian, there were a few that were really frustrating. There’s a mini-tower defense mission to teach you how to use turrets and it just went on, and on, and on. There are 25 waves to get through, and in my impatience to just get through it I stupidly misread the instructions about defending the Turret Control Center and whacked anti-air turrets down on the wrong spot. After about ten attempts I managed to sell other turrets and fend off the attack. A stupid mistake on my part, but the mission had become pretty tedious so at least I made it interesting for myself.

Some of the later missions are tough to get through. They’re challenging, but sometimes to the point of frustration because you may simply be one unit short to get a missions complete but there’s a lack of resources to build more. I’m not necessarily asking for the game to made easier, it just needs a little tweaking on some of the later missions.

On a more positive note about the missions, the way the maps expand out as missions progress, and the fact that there are sometimes choices of where to attack which open up new mini-mission, are both features that have been well implemented.

This is an RTS so it’s going to have multiplayer, right? At this point in time sadly not. There are skirmish matches against the AI but to be honest it’s just not the same as kicking someone’s backside online. While I understand that there’s only one guy developing this, having no multiplayer could be a missed opportunity because the game should be quite solid when it’s completed.

There are maps for skirmish matches being added to the Steam Workshop, but that’s as good as it’s going to get unless a decision is made to extend development or release a multiplayer later.

Meridian: New World has been entertaining to play so far in Early Access but there are missing features that unfortunately hamper complete enjoyment. Your unit AI is sometimes a little over keen to attack enemy units, missions have perhaps been slightly over-tuned and I do wish there were more separate units instead of the ‘choose what weapon to equip’ model. Multiplayer is not currently on the table, but that’s one feature which could greatly enhance this fine looking RTS. Ede Tarsoly has done a great job as a one-man team and I hope he decides to spend more time on it and expand it still further.

As this is not a review, because we don’t review games that are not complete, just be aware this is currently a single player only RTS before diving in.

By Tim McDonald2 days ago
Previews