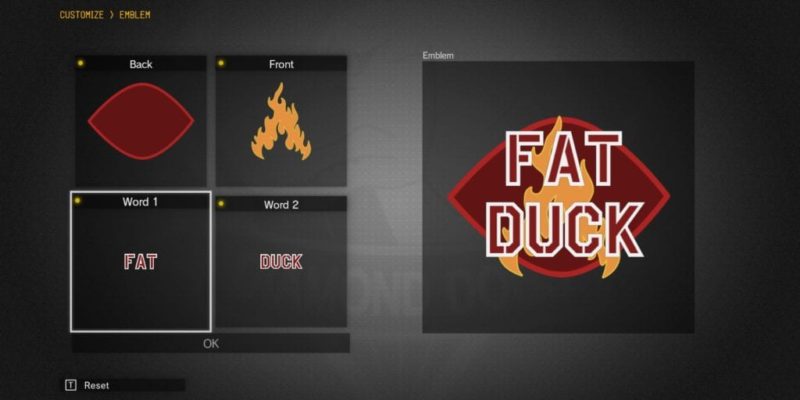 I say “promises”, but it actually did work for me. I can now add lengthy words to my emblems, without the game dropping to several seconds per frame! Huzzah! This also means I can probably stop using the emblem that appears in the screenshot here, because I made that and then went “Yep, never looking at the emblems again until this issue is fixed.”

This 60MB patch also “tentatively fixed” crashes during chapter 1, that were occurring on systems “that had certain video codecs installed.”

You can read the full patch notes over on the Steam Community if you really want to, but, uh, I’ve pretty much summed up the entire thing here. Still no word on the ongoing server problems, but the servers actually seemed alright when I started it up to test the emblems. Not sure how long that’ll last, though.

As for Metal Gear Solid V content on PC Invasion: I’m hoping to stick up some tips and tricks soon-ish, with a full review to follow as soon as I finish this mammoth game. I think I’m getting there, although I keep getting distracted by Side Ops/attaching zebras to balloons/punching my Mother Base staff in the face. And let’s face it – you don’t want to read a review by someone who’s skipped past all of these essential activities.