A Microsoft document was leaked recently through Scribd.com and it is full of details. The document, labeled “720 9/24? is 54 pages long and appears to be an official strategy for the release of the console that is to come after the Xbox 360.

The document describes a console that will be 8 times as powerful as the current Xbox 360 and will include a Blu-ray drive, whole house DVR capabilities, and an upgraded Kinect v2 with 4 player tracking and HD video capture. 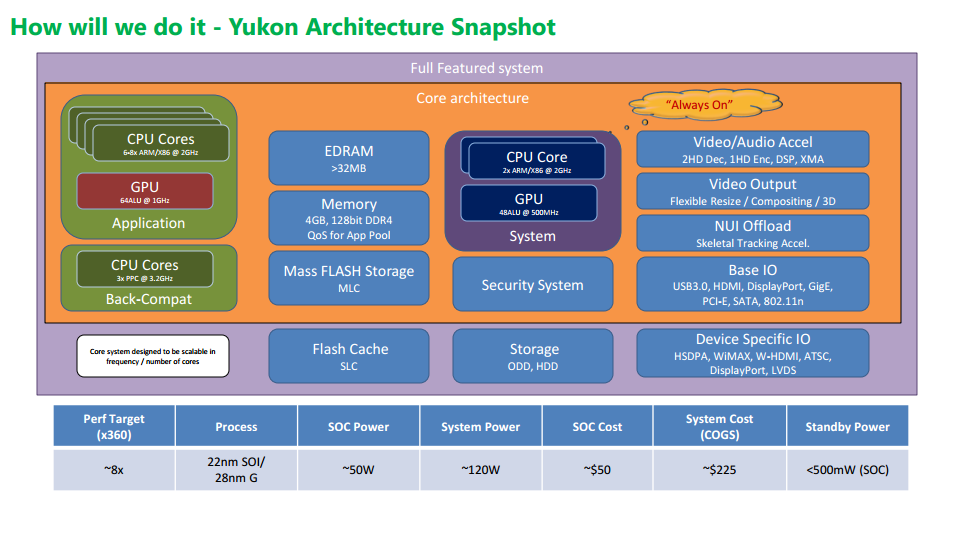 Here is where things get technical so I’ll let somebody else do the explaining:

“The block diagram below shows a system with a 6-8 core x86 or ARM-based CPU, 4GBs of RAM, a separate ARM-based, dual core embedded CPU for low power media functionality, AND the original tri-core PowerPC CPU from the 360 for backwards compatibility. Despite all that they are targeting a system that will operate at 120 watts, a little more than half the power dissipated by the launch 360 and PS3. They are also targeting a $299 price point, including Kinect packed in with each console, and a launch in 2013.”

The document also mentions a 2012 release of a “Xbox 361?, a low-cost Xbox that is intended for “every person and room in your house”.  If this document is legitimate, then it definitely appears as if Microsoft is trying to make the Xbox into more than just a video game console, and more like a central entertainment system.