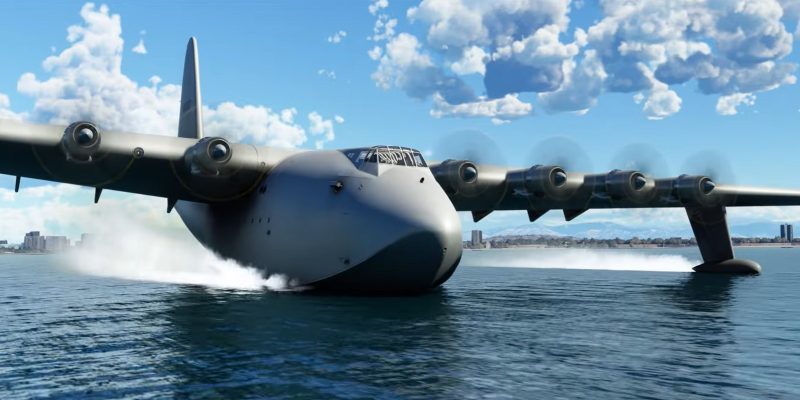 The 40th anniversary of the Microsoft Flight Simulator series is fast approaching. To celebrate this milestone, Asobo and Microsoft are releasing a special, free update for the sim, which introduces a variety of new aircraft and features. While it showed off the Anniversary Edition months ago, Asobo came to Gamescom 2022 to reveal even more surprises about this update, including new planes both small and quite large.

Some of the new planes include the Spirit of St. Louis, a pioneer for transatlantic crossings, and the Wright Flyer, the first heavier-than-air aircraft that marked the true introduction for the aviation industry as we know it.

From the smallest to the largest

We now know that the Anniversary Edition will bring 12 new aircraft in all. We knew of entries like the mighty Airbus A310, a fully complex airliner that’s coming completely for free, and the legendary Douglas DC-3, the twin-engine piston that’s been flying for decades.

These aircraft will be joined by newly-revealed planes like the Curtis Jenny, a very popular trainer aircraft from 1915, the Gruman Goose, a beautiful amphibious plane known for shuttling celebrities, and the prodigious Hughes H-4 Hercules, aka Spruce Goose. It only flew for 20 seconds in real life, so this will mark the first time it flies as intended.

The 40th Anniversary Edition of Microsoft Flight Simulator also brings the long-awaited arrival of gliders and helicopters. Asobo explained the mechanics behind them more during its Gamescom presentation.

Asobo did more than just add these aircraft in. It has done extensive work to the physics and airflow simulation to provide authentic flight dynamics and model behavior.

In layman’s terms, the team has worked hard to simulate the various ways a helicopters blade alter the airflow around it, which affect its lift and maneuverability. Players can even turn on the visualizations to show how the air around the copter is being pushed, pulled, whirled and dispersed.

There are now “thousands” of parameters surrounding helicopters in the sim, compared to the single parameter found in the preceding Microsoft Flight Simulator X.

Jorge Neumann, who leads the Microsoft Flight Simulator team at Asobo, emphatically declared that this is the most authentic simulation for helicopters ever seen in the industry. The team worked hard alongside real pilots to ensure its authenticity.

Asobo even went up in a real Guimbal helicopter a few months ago to gather data and observed how the high temperatures required the aircraft to ascend horizontally as opposed to the usual vertical maneuverer. The effect will be present in the sim.

For gliders, a similar feature will be available to help players find updrafts, which are large vortexes of warm air that help push the glider’s wings upward and allow it to sustain flight. Gliders will even be able to be realistically launched via a winch or tow plane. They’re best suited for flying around mountainous regions where airflow is constant and updrafts are plentiful.

All of this extra attention-to-detail, in addition to assembling the 12 aircraft in such rich detail, is why it took two years to complete. The fact that it’s coming as a totally free release is meant to be “a big gift” to the flight sim community.

Speaking of gifts, in addition to the 12 new planes, there will also be 14 new heliports, 10 new glider ports, and four classic airports. Included on the list is the legendary Megs Field from Chicago, where the some of the original Microsoft Flight Simulator games first started their scenarios from. On that note, the mission mode from past sims is also being reintroduced in this release.

For the uninitiated, some past missions included situations that tasked you with taking off from Las Vegas and flying to the illusive Area 51 where a UFO could be spotted. Neumann didn’t give any specifics, but the past does show we can at least expect some wild scenarios.

The 40th Anniversary Edition of Microsoft Flight Simulator will take to the skies on November 11.

Tower of Fantasy: The Best food recipes for healing and buffs

How to build the best Call of Duty: Vanguard EX1 class