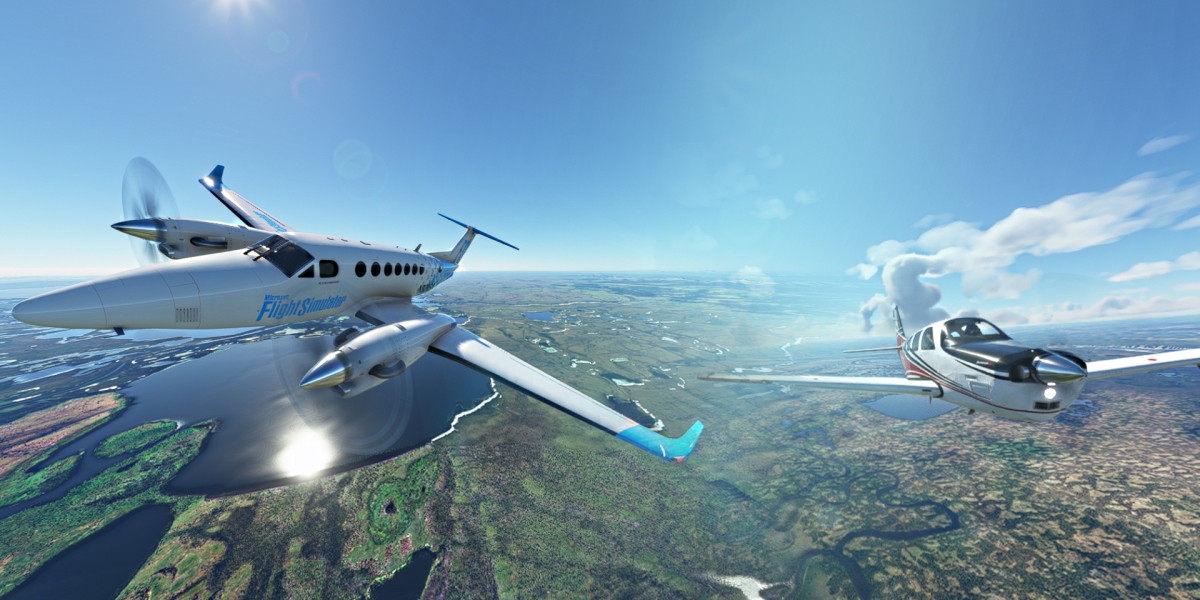 Microsoft Flight Simulator includes a lot of default aircraft baked into each of its various editions. While you’re free to begin your pilot journey in any metal birds of your choice, this guide will give you a basic breakdown of what we consider to be the best starter planes to help ease newcomers into the experience.

In this guide, you’ll find a series of both single and multi-engine aircraft. Rather than order these from “best to worst,” these are all recommendations meant to accommodate pilots of all kinds and skill levels. Additionally, most of the planes in this list can be found in the Standard edition of Microsoft Flight Simulator, though a small handful are limited to the Premium and Premium Deluxe editions.

As one of the most widely-used training aircraft in the world, the Cessna 152/172 is pretty much the equivalent of a tricycle with wings. This plane is revered for its ultra-stable flight mechanics and very low top speed. Stalling out is extremely hard, simply because the wings are wide enough to capture airflow very efficiently.

The 152 model is a bit slower and more primitive, whereas the 172 is armed with the G1000 glass cockpit making this already easy prop even easier thanks to modern avionics. Activate the autopilot and watch the plane handle itself with ease. These are some of the best planes for learning the basics of the sim, in addition to going on sightseeing adventures in a plane that prefers to be low and slow in the first place.

Even slower than the two Cessna models mentioned above, the Robin DR400/100 Cadet is an extremely simple aircraft to handle. It has large wings, and a small piston engine that doesn’t output a lot of power. It does, however, offer a wide-angle cockpit that provides beautiful views.

Unfortunately, the Robin DR400/100 Cadet lacks autopilot, so only manual control is possible. While that doesn’t make it the best plane for automation, its overall simple nature makes it easy for even novices to get the hang of it relatively quickly.

This tail dragger fits into a very specific category of aircraft known as “short takeoff and landing,” or STOL, aircraft. As that name implies, such planes can land and takeoff on very short runways. Technically, it doesn’t even need a proper runway per se. Its wide bush tires allow it to land on even rough, uneven surfaces, like in the middle of a field or valley.

The X Cub is purpose-built for backcountry flying, as its big wings and lightweight design make it easy to buzz in and out of almost any location. So, if you’re feeling adventurous, this is the plane to pick to really get up close and personal with the beauty of Microsoft Flight Simulator. Despite its cruise use-case, the X Cub does feature modern avionics and simple flight mechanics. In addition, it has decent horsepower and range.

The Bonanza is one of the most well-known general aviation aircraft for a reason. It has a decent cruise speed, good range and payload capabilities, and the G36 model comes with a beautiful glass cockpit that makes flying it even easier. It can get in and out of most airstrips, though it’s not as bush-enabled as the previous two aircraft.

Still, the Bonanza is a very fun plane to fly and doesn’t take long to get the hang of at all. That glass cockpit mentioned earlier makes a big difference as it has the amenities of a high-tech plane but still feels as humble as the more “pokey” aircraft we covered earlier. It really does sit straight in the middle.

If you need an extra engine over the Bonanza, then its twin-engine sibling will do the job. The Baron has pretty much the same features as the Bonanza, though it offers much longer range, cargo capacity, and a slightly higher service ceiling.

It shares the same top speed and glass cockpit as its single-engine brother, so once you’ve learned to fly one, you can pretty much fly the other with ease. For those who only own the standard edition of the sim, then these two props from Diamond Aviation offer a very similar experience to the aforementioned Beechraft twins. The DA40NG offers a solid mix of speed, altitude capability, and a modern glass cockpit. Just like the Baron, the DA62 is the twin-engined version of the DA40NG. The interior and exterior of both aircraft are extremely similar, making familiarization even easier.

The key difference is that the DA62 is noticeably faster and can fly much further and higher than the DA40NG. Nevertheless, either aircraft is a good choice for those that need some extra speed and agility over the truly beginner aircraft. Speaking of which…

A few months ago, Asobo revealed that this turboprop was the best plane in Microsoft Flight Simulator in terms of overall popularity. That’s for good reason — it’s a beast. The TBM 930 offers all the amenities of a jet, with the only difference being that it has a propeller rather than a jet engine.

The TBM 930 is one of the fastest default aircraft in the sim, much faster than any of the previous aircraft mentioned thus far. It can also soar as high as 31,000ft, which is the average height of a commercial jetliner. Armed with a range of 1730 nm, it’s also able to pull off cross-country flights with minimal stops. The icing on the cake is that this is yet another aircraft with a glass cockpit, making it even more advanced, yet still very simple to fly. It’s easily the best all-around plane in the sim terms of speed, flight capabilities, and range.

A favorite with executives, the King Air 350i prides itself on offering similar jet-like capabilities to the TBM. But, it does this with a twin-engine set-up, giving it a higher cruising altitude, better range, and cargo capacity.

Interestingly, it’s not as quick as the TBM, but it’s certainly more supercharged than its smaller siblings: the Baron and Bonanza. A glass cockpit is included, so all the information a pilot would need is at their hands.

The complete opposite of the previously mentioned C152/172, the Cessna CJ4 is a twin-engine, small business jet that can dart in and out of most airports. Its very small size allows it to easily speed up to cruising altitude (a whopping 45,000 ft) and blast its way to its destination.

It’s the simplest default jet to learn in the sim and offers modern avionics that’s not as intimidating as the jetliners. But, maybe that’s exactly what you came here for. So, finally…

Rivaling the Boeing 737 as the most popular commercial jet in the world, the A320neo has made a name for itself for its balance of efficiency, speed, and carrying capacity. The backbone of Airbus’ short-medium haul category, the A320neo features modern engines that allow it to fly fast and far, while carrying a lot with stellar fuel efficiency. It’s not as easy to learn as a Boeing jet, however.

Airbus aircraft are known for “flying themselves.” That is, even with the autopilot disabled, you have to learn that the aircraft manages a lot of its operations on its own. Speed, altitude, heading and all, the on-board computers are in charge of the show most of the time. So, it’s good to look up some online tutorials (and play the in-game ones) to get adjusted to the nuances of its flight mechanics. But, once settled in, you’ll find that the A320neo can handle nearly every route you can throw at it. Outside of ultra-long hauls, that is.

Known as “The Queen of the Skies” and one of the most iconic planes ever, the Boeing 747 is a gem of a jet. Its quad-engine array is becoming less frequent these days, but it lives on in Microsoft Flight Simulator. As one might suspect, manning those four engines is no easy task.

The 747 is large, heavy, and has a lot of horsepower. Thus, it can be a little intimidating. But, it’s really more of a gentle giant. It’s not as computerized as the A320neo, so flying it feels more natural. However, its massive size means that one has to anticipate its movements a bit earlier, as correcting any mistakes will take longer. Only certain airports can comfortably handle an aircraft of this size, so though it can fly far, you can’t take it just anywhere. Stick to mega airports like LAX, JFK, London-Heathrow, and similar places.

The Dreamliner is the most modern default plane in Microsoft Flight Simulator so far. It features an array of different systems, a composite fuselage, and very beefy GE and Rolls-Royce engines. Surprisingly, it’s a little less straightforward than the 747 in terms of flight mechanics. Its long fuselage also makes taxiing a bit of a challenge. But, this is another plane that can fly far and fly fast, making it perfectly suited for long-haul routes. Since it’s only a twin-engine, it can also get into more airports than the 747 can.

Once you’ve learned any of the other airliners in Microsoft Flight Simulator, flying the Boeing 787 won’t be too daunting. But, it does have a few unique characteristics with its autopilot system that require some getting used to.

Microsoft Flight Simulator is available via Steam, the Microsoft Store, and also as part of Xbox Game Pass. For more information, check out our features and guide hub.

By Jack Salter11 mins ago
Guides