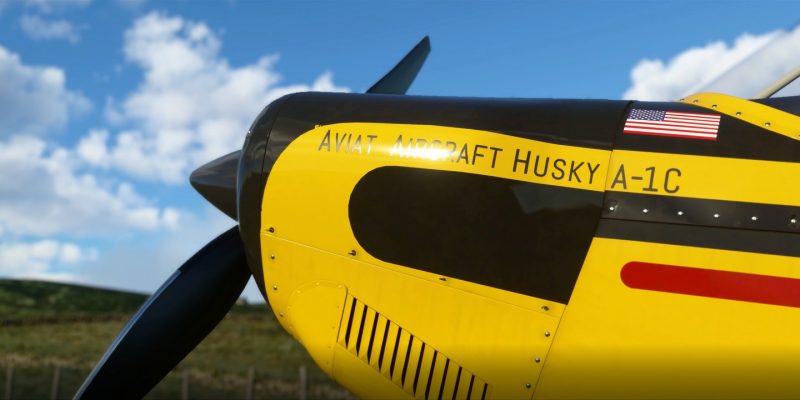 Asobo has been steady at work on post-launch content for Microsoft Flight Simulator for nearly a year at this point. The sim has been supported with regular updates pertaining to improvements, fixes, and additions for a while. The team behind the scenes has also been working on the next most important thing for Microsoft Flight Simulator: actual new planes. The next of such has been revealed via the recent Developer’s Q&A stream held on May 26, 2021. The next first-party plane is none other than the Aviat Husky A-1C bush flier, coming in the next few months.

The Aviat Husky is a single piston engine prop built out of the American state of Wyoming. Wyoming is one of the more rugged states, and thus, the Husky being built there is quite fitting. The aircraft is designed for backwoods flying like soaring low and slow over the treelines of vast forests, landing on dirt and gravel, or even rivers and streams with a pair of floats.

The A-1C variant of the Husky was first certified back in 2007, but the aircraft type itself has been around since the late ’80s. It sports a relatively simple but reliable 180hp four-cylinder piston engine and can fly up to 126 knots (145mph/233 kph). While it may not fly very quickly, its large, high wings give it great lift capability and the added advantage of being able to land on super short strips. It can even max out at 20,000ft, making it a good fit for even high-altitude areas like mountain ranges.

Asobo’s first post-launch aircraft for Microsoft Flight Simulator was an ultralight: the Top Rudder Solo 103. Now the team has moved up a class to a bush plane. Though, to an extent, both of these do fit into a similar category. These are both meant for simple flying that allows for getting nice and personal with the surrounding scenery.

It’s no real surprise that Asobo is opting to focus on these kinds of aircraft first rather than something that’s more sophisticated. Microsoft Flight Simulator has proven to be a dream come true for scenery lovers, and it was marketed as being a VFR-enabled sim right out of the box. Thus, these planes fall into that use case quite well.

All that being said, Asobo isn’t neglecting the desires of fans of larger aircraft. It’s working alongside developers from the venerable Aerosoft team to design the ATR 42/72-600 turboprops. The ATR family is popular in the commercial regional market, competing with the likes of regional jets like the CRJ family, the Embraer family, and the Airbus A220.  The new ATR propliner planes are expected to roll out to Microsoft Flight Simulator in 2022.