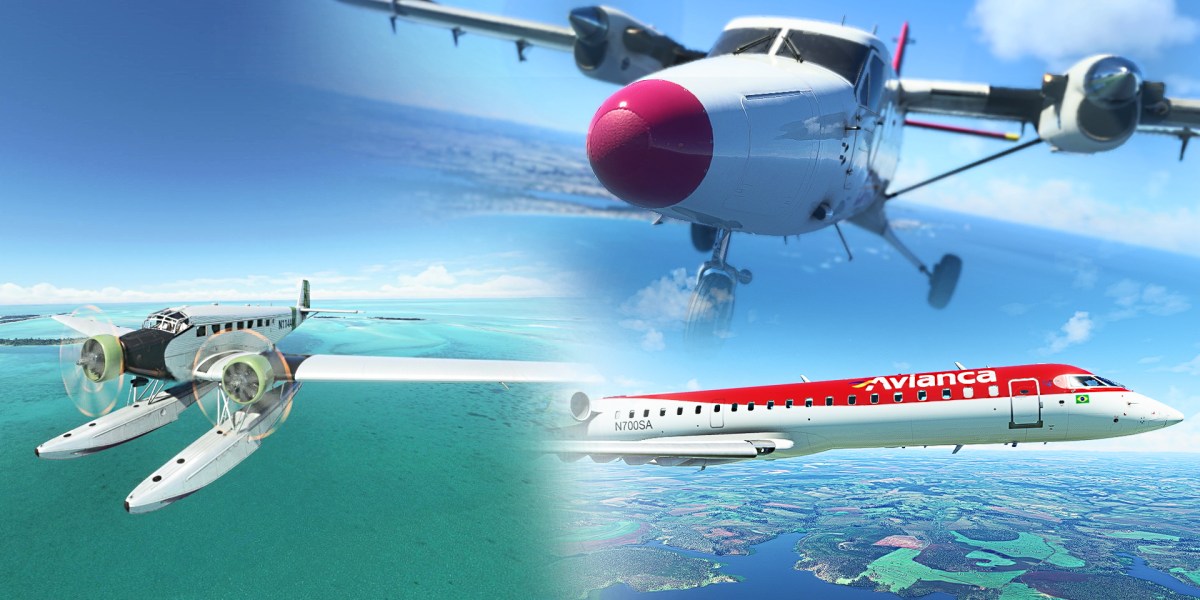 Microsoft Flight Simulator has been steadily amassing a growing number of add-ons over the last several months. Of course, the world of freeware add-ons is definitely increasing rapidly, but so is the world of payware equivalents. The in-game Marketplace is being regularly updated with such products, so it could be a little overwhelming to know which ones are truly worth taking a look at.

After spending a good chunk of time with a few products, here are some personal recommendations from my own collection, albeit in no particular order. All you need to really keep in mind is that these aircraft are all unique, and will better suite certain kinds of flights. So the “best” are the ones suiting your personal tastes in terms of where and how you like to fly.

Please note: all prices are in USD.

As of the time of publication, this is one of the latest in the line of payware aircraft. It’s also been one of the most anticipated for some sim enthusiasts. The Twin Otter is a world-renowned turboprop that has been in production all the way back since the 1960s, and continues to remain so up until today. It services areas as far north as the frozen wild tundra of Alaska, all the way south to the isolated jungle regions of the Amazon rainforest in Brazil. The Twin Otter is special due to its incredibly resilient design that allows it to take on all these different flying conditions and landing terrain. Here in Microsoft Flight Simulator, it can be outfitted with tundra tires for rough dirt, grass and snow runways, or even floats to perform takeoffs and landings via water. Aerosoft has created 13 unique models that each offer such variations, as well as a few others like a three-blade and a four-blade prop option. The extreme multi-use case of the “TwOtter,” as it’s affectionately referred to by some fans, makes it one of the rare aircraft that can be considered an “anyone’s flier.” That is, because it can go just about anywhere, it can be enjoyed by most. While she’s certainly not nearly as quick as other turboprops in the sim the Daher TBM 930 or Beechcraft King Air 350i, its rough, rugged and reliable design makes it a simple and fun aircraft to ideally perform short hops in.

Speaking of “short,” the Twin Otter also has some unique STOL capabilities. It’s able to take off and land from very short distances, making it ideal to swoop into very small and remote locations.

My personal journey with the TwOtter so far involved touring all the way down The Antilles; the chain of islands between Puerto Rico and Trinidad & Tobago in the southeastern Caribbean. In real life, Twin Otters can be found here quite frequently, so it was a fitting proving ground. Certainly consider picking it up if you like flying low and slow to take in the scenery. Back in 2021, Asobo introduced a new line of aircraft that it would gradually bring to Microsoft Flight Simulator. Dubbed the “Local Legends” series, each aircraft in this collection would be rolled out alongside an appropriate World Update. The first Local Legend to take to the skies was the Junkers JU-52, which released alongside WU VI back in September 2021. Originally, I didn’t pay much mind to this plane, due to the fact that it was honestly old and slow. Yet the charm of its design pulled me in.

Fast-forward a few weeks later, and I bit the bullet simply because the plane just didn’t stop looking “cool” to me. But really, “elegant” is a much better word for this old-timey bird. The JU-52 is a trimotor from one of the earliest eras of flight, having been first produced in the 1930s.

While its primitive design and specs are very indicative of that, Asobo has crafted it in such immaculate detail, that its vintage feel is all a part of the experience. While it pales in comparison to most other planes in the sim in terms of performance, the JU-52 is still a surprisingly remarkable aircraft. There are three landing gear options: traditional wheels, skis and floats. This means you can take it JU-st almost anywhere (pun intended). The trimotor handles well, and the sounds of its three archaic piston engines make for some audio that’s quite soothing.

True, the lack of modern avionics makes the flying experience more tedious than a modern craft, this is still worth it just for its remarkable beauty. 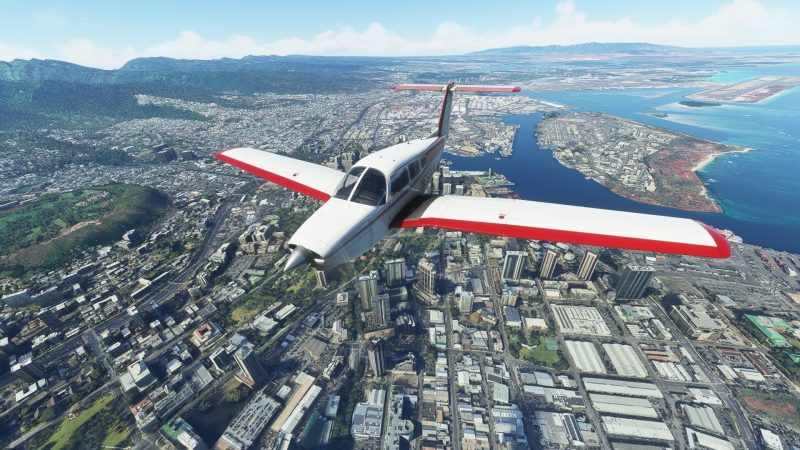 While there are technically four different Piper aircraft (Warrior II, Arrow III and Turbo Arrow III/IV)  that have come to Microsoft Flight Simulator from Just Flight so far, I’ve decided to lump them altogether due to them all being so similar.

Just like the aforementioned Twin Otter, these Piper piston-engine planes hail from several decades ago but are still very much in use today. You can find them across the world, particularly being flown as private aircraft. While they’re certainly not the fastest nor the sleekest, they’re very easy to fly and get the job done without much of a fuss, hence why they’ve survived for such a long time.

The Turbo Arrow III/IV variant is the most capable of Just Flight’s collection thus far. However, it still pales in comparison from a performance standpoint to that of more modern props in the sim like the Beechcraft Bonanza or Diamond DA42. The avionics (the flight systems) are also far more primitive, although still capable enough thanks to the inclusion of various GPS models and even a simple autopilot system.

If I really had to recommend only one for the sake of money, I’d say that the Turbo Arrow III/IV stand out the most to me simply due to their higher cruise speed. But, nonetheless, you’ll be quite fine picking any of the aircraft as they all feature beautifully modeled interior and exterior textures, excellent sound, and cool interactive surfaces. 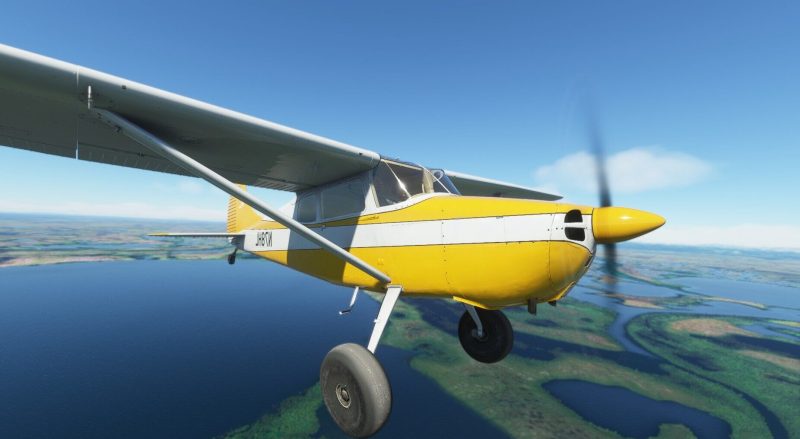 The Cessna 170B, or simply “C170B,” is a rugged, STOL-capable prop. If “I serve one purpose” was a plane, then this would be it. This little metal tube doesn’t have that much horsepower, nor does it boast any fancy avionics of any kind. It’s simply content with being lightweight, maneuverable, and just fast enough to stay airborne. You don’t fly this thing to get super far in a rush; you fly it to really have a hands-on experience and take in the view around you. Carneado has done this bush flier justice.

This is definitely a great aircraft for venturing out into the smallest and most rugged of airports. Whether that’s the Australian Outback, or the Great Plains in the USA, the C170B is a bird that begs to be tossed around and soared into fields, onto the side of river banks, and plateaus. This is a tried and true backcountry flier; think of a Jeep Wrangler, but with wings. 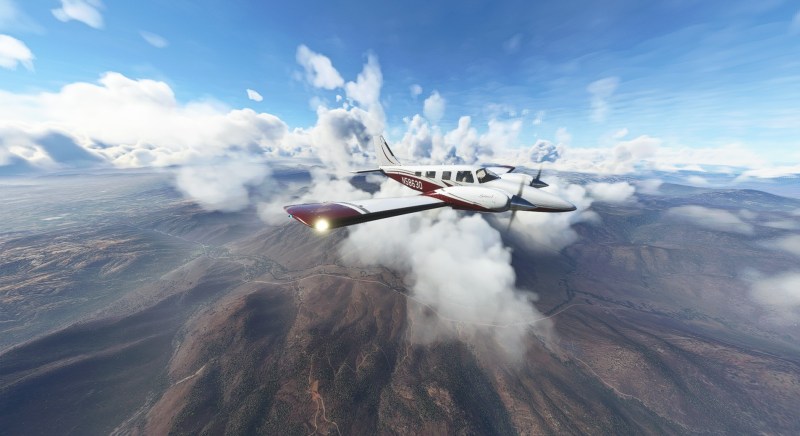 Rivaling the likes of the included Beechcraft Baron, the Piper Seneca V is a twin-engine piston prop that’s meant for dual-cruising goodness. A much more modern airframe than its single-engine ancestors we talked about earlier, the Seneca V boasts some legitimately nice cruising speeds and altitude capabilities. This makes it a much more viable option for longer voyages, as you won’t feel like it’ll take you forever to get there. Carenado’s rendition of the twin has turned out well.

Prior to a recent real-life trip I took around Southern California, I decided to survey some of the sights from above. The Seneca proved to be a beautiful choice for such a mission, and effortlessly climbed above the tall mountain ranges that run through this part of the state. In typical Carenado fashion, there’s a lot of eye candy to enjoy; superb texture work, and even nicely animated fittings such as the static wicks off the tail fluttering in the wind. This aircraft also features interactive animated surfaces, which is something that none of the default aircraft have to date.

This is truly a great bird for most general aviation flying. While it’s not as rugged as any of the aircraft mentioned prior, it can still handle some missions off the beaten path like landing on short grass and gravel strips, allowing you to poke around most places as long as they’re not too extreme. 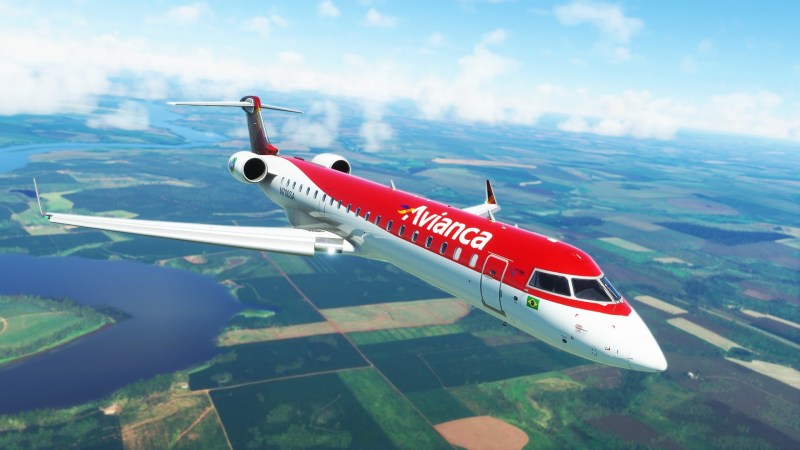 Aerosoft’s CRJ project has the special designation of being the first complex airliner add-on to come to Microsoft Flight Simulator, beating out the likes of other big names like PMDG and QualitySimulations. The CRJ 550/700 series, previously created and owned by Bombardier before being purchased by Mitsubishi in recent years, is a very popular line of regional jets used by airliners all over the world for several years. If you’ve ever flown a short or medium-haul route with airlines such as Air Canada, Delta, American Eagle, United, or British Airways, then chances are you may have taken a ride on one of these at least once.

In Microsoft Flight Simulator, the CRJ serves as a very capable alternative to flying the included Airbus A321neo for short and medium-haul trips. It’s quite the little rocket, with some pretty decent climbing and cruising capabilities. Its rear-mounted engines and pencil-like body also give it a noticeably sleeker, more pointed profile than the Airbus. If you consider yourself to be an aerial photographer, then it’s definitely offers a nice visual change of pace too.

But, of course, it’s really its flight dynamics that help the jet to stand out. Depending on who you ask, Aerosoft’s CRJ may or may not be considered “study-level.” Nevertheless, it is definitely a little more complicated to set up than most of the other included aircraft. Albeit, this can be overridden by a handy built-in tablet that can toggle different “states” for the aircraft when it’s on the ground. As such, you certainly can spend time learning how to realistically go through its checklist for startup and taxi, all while programing the navigational systems and calculating the weight and balance of fuel and payload. Or, you can simply just jump straight to flying to your destination.

Either way, it’s a fun narrow-body jet to pilot and continues to scratch the itch of providing an alternative airline experience, that is until other high-profile releases soon also hit the marketplace. 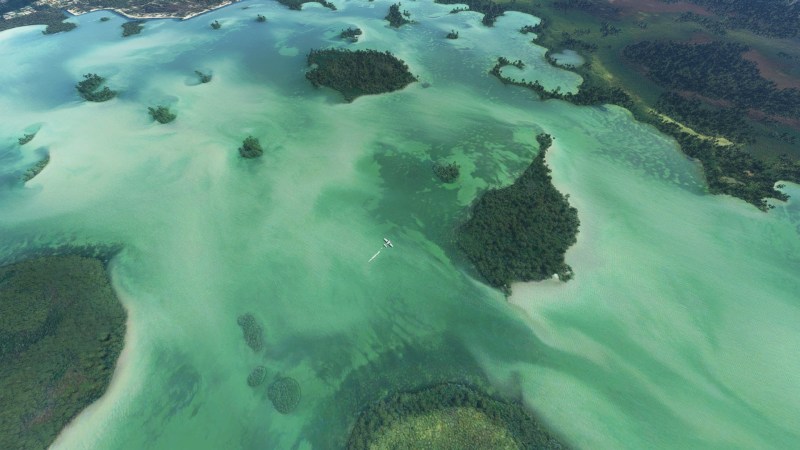 Again, these are just a handful of aircraft that are currently in Microsoft Flight Simulator’s addon library. Additionally, we also have two volumes of freeware recommendations found here and here.

As more aircraft are released, we’ll keep creating more lists such as these to provide a helping hand to guide you towards what might be your next potential favorite flier.

Unknown Worlds’ next game is ‘Project M,’ set for Early Access release in 2022