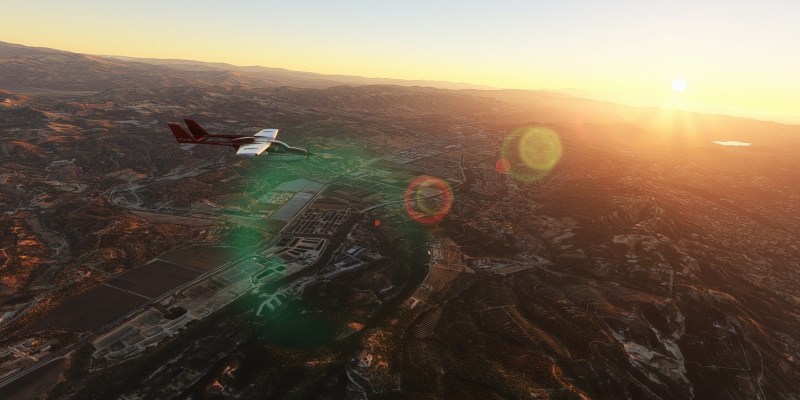 After several months of tweaking and testing, Asobo has released Sim Update 10 for Microsoft Flight Simulator to the public. It’s arguably the most anticipated update of the sim’s life so far — and the most delayed. Sim Update 10 was originally supposed to grace our presence all the way back in July, but Asobo opted to hold it off until it was sure the update was ready for prime time. I didn’t participate in the beta test, instead opting to wait for the full release. Now, after several hours of testing on my mid-range Acer Nitro V laptop, I’m happy to report that it really does what it says on the tin. Sim update 10 brought the big performance fix Microsoft Flight Simulator users have been waiting for.

I’ve seen the quality of the sim grow from its pre-release infancy on PC right up until present day, and thus, I’ve experienced the effects of every major Sim Update — good and all. When the sim achieved the milestone of coming to the Xbox Series consoles back in Summer 2021, a similarly big Sim Update geared towards performance improvements was also released for the PC version. That update fixed a lot of the issues, but somewhere along the line afterwards, the experience was hampered. These issues became more frequent and egregious after Sim Update 9 released earlier this year.

Sim Update 10 had the very tall order of resolving months of issues while also improving the core sim’s optimization. In only a matter of hours with Update 10, it became apparent to me that Asobo seems to have finally cracked the code.

To gather a decent amount of data, I decided to run a few scenarios with specific conditions:

After conducting four test flights with these conditions, my conclusion is that performance, while not 100% perfect (what PC title is?) is leaps and bounds smoother than ever before. Arguably, it’s the smoothest since Microsoft Flight Simulator first took flight.

For this first, post-update test flight I decided to load up the 737-600 by PMDG. I’ve never had many issues running the 737, but it is a very complex aircraft. Any time I’d have it sitting on the ground at any location but the most simplistic airports, my framerate would be below average until I climbed up to at least a few thousand feet (more on this phenomenon later).

I decided to make use of Nvidia DLSS in “Quality” mode for this flight. Immediately I noticed the smear effect that seems to be common when using DLSS with Microsoft Flight Simulator. It essentially makes textures look noticeably fuzzier. It isn’t obscene, but there’s certainly a difference. This is most noticeable with text around the cockpit. From gauges to panels and labels, they’re all a little harder to read without zooming in. The scenery outside the cockpit window also exhibited some fuzziness, too. Asobo claims this effect will be eliminated when Nvidia releases new drivers; these drivers did not release alongside the update itself.

That said, I also noticed that using DLSS makes edges very smooth. So, while the final image is fuzzier than when using TAA, there’s less of the so-called ‘jaggies’ present.

Performance on the ground at KJAN, a stock airport, wasn’t bad at all. There were some hiccups, especially when panning around the cockpit quickly, but this is how the PMDG 737 has always performed for me.

However, it all did seem a bit smoother than usual, especially once I got moving. Panning the camera around with the external cam on the ground, has almost always induced severe stutter for me, especially with an airliner. During this test, there was still some of that, but notably not as egregious.

Getting the jet up to cruising altitude, things were nominal. Aside from a few very minor stutters here and there, everything was fine. The real test would come with landing in Salt Lake City.

KSLC is another stock airport, but the surrounding area does have some Photogrammetry applied. Surprisingly, my descent was pretty smooth. I was even more surprised when, during final approach, I didn’t encounter a dreadful lock-up — something of which I’ve become accustom. This effect has hampered a lot of my landings, as it always tends to happen moments before touchdown. It didn’t happen here, however!

So, the first test was a success. But, I didn’t want to stop here.

I had a 50-50 expectation for this next test. The CRJ isn’t as complex as the 737, but it’s still a little resource hungry. Additionally, I purposefully decided to go to LA due to pretty much all of Southern California featuring rich Photogrammetry scenery.

Not to mention, KLAX is a handcrafted airport, which can be very taxing on a system. In other words, this was the “torture test.” Again, I opted to keep DLSS on. Shockingly, Sim Update 10 came in clutch, yet again.

On-ground performance in KSLC was fine, aside from a few minor stutters. The climb and cruise was also spot-on. But really, it’s the smooth descent into the Los Angeles area and the subsequent landing that blew me away. The lock-up issue during the landing did present itself here, but it only lasted very briefly.

After that, I was able to touchdown without issue and taxi to the stand. My fps remained in the high 20s and kept touching 30 the whole way in. I don’t recall ever getting performance like this at KLAX before, nor at most of the other handcrafted airports.

Again, another big success. But, I really wanted to see if this was a placebo. Spoiler: it wasn’t a placebo.

Though not as elaborate as the preceding test, I figured it wouldn’t hurt to take a tour of a very dense Photogrammetry area at low altitude. I decided to do the whole thing with TAA enabled, just as I’ve been doing prior to Sim Update 10. But, there were a few moments I swapped between TAA and DLSS just to see what the differences would look like. You can view the DLSS example here and the TAA example here.

Thus, I loaded up the Skymaster (which I’ve never had much performance issues with before) and took off from a small airport just outside of LA. The plan was to fly from outside of LA, over its greater urban area, and then make my away alongside the Sierra Nevada range to land outside of San Diego.

Again, all of this is covered in Photogrammetry. It’s one of the most well-covered areas using the tech throughout the entire sim so far. But despite flying directly over the heart of LA, skyline and all, the framerate didn’t buckle. There were some regular small hitches, but nothing egregious. Coming down just outside of San Diego, I still had no issues. The approach and landing similarly went well. Considering I kept TAA on the entire time, I was shocked at just how well it went.

From this, though, I realized that my system may not necessarily benefit all that much at all from using DLSS. Seeing that I only run the game at 1080p and display it on a 1080p screen, I probably shouldn’t be that surprised. If I was trying to run at 2K or 4K, that would be a different story.

To really prove my findings with the third test, I decided to load up the lengthiest one of all. So lengthy, I’m writing about it as I fly.

I decided on a flight with the Boeing 787 from San Diego, California (KSAN) to Boston, Massachusetts (KBOS). While I won’t finish the flight before this piece, I can say that the initial findings are already proving superb. On the ground at KSAN (which, again, is surrounded by dense Photogrammetry) with such a large airliner, I experienced no issues. The fps counter stayed mostly glued to 30, with some minor drops to the high 20 fps range.

Taking off and climbing out went well. At this point, the sim is purring along nicely as I fly over Colorado. TAA is still enabled, and it looks a sharp as a knife.

Overall, I can say that Asobo has really knocked it into the stratosphere with the performance of Sim Update 10 for Microsoft Flight Simulator. Even with me throwing all of these variables at it, it passed with flying colors (pun intended). Despite my system not being anywhere near cutting edge, this singular update has breathed such a wealth of new life into Microsoft Flight Simulator. I’m confident I won’t have to shell out for an RTX 40 Series as soon as I thought.

Speaking of, the sim will be getting DLSS 3 support when the 40 Series launches in a few weeks. This, combined with the raw power of the high-end 40 Series cards, has been shown to send the fps counter well into the triple-digit range.

Realistically, you don’t need a title like Microsoft Flight Simulator to run at anything higher than 30 fps. It’s one of the rare games that can get away with running at a moderate framerate. But, if you can go higher, why not?

Guilty Gear Xrd REV 2 is getting rollback netcode on PC

Silent Hill: The Short Message shows up on Korean rating board