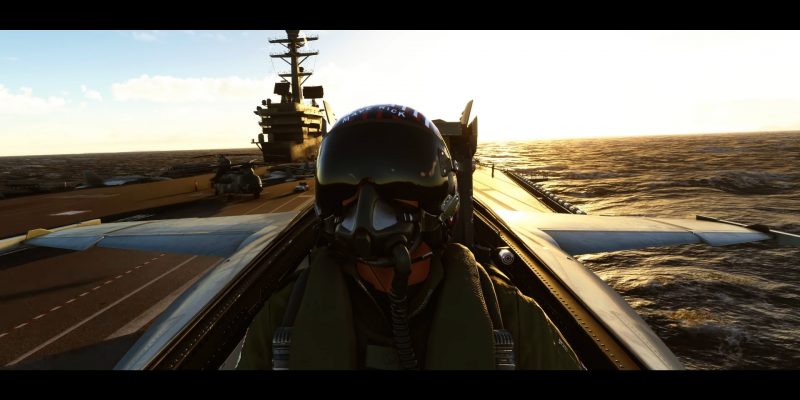 The Xbox and Bethesda Games Showcase was a treat for fans at E3 this year, as a lot of fan-favorite games were shown. Microsoft Flight Simulator fans were treated to a couple of announcements, too. The first is that the game will be coming to Xbox Series X|S on July 27. The second, and important one for PC gamers, is that Microsoft Flight Simulator is getting a free Top Gun Maverick DLC.

The expansion is a collaboration project with Paramount Studios for the launch of the new Top Gun film. Maverick takes flight in Microsoft Flight Simulator in Fall 2021. Or rather, you’ll take flight as Maverick in Fall 2021.

The release date for the film is currently November 19. So, expect the DLC to drop somewhere around then. I’m no fighter plane expert, but I saw a couple of different aircraft in the trailer. One took off from an aircraft carrier out in the ocean and the other took off from a remote runway. So, there will probably be at least two new planes in the expansion.

Feel the need, the need for speed

There are two elements to Top Gun. Flying the best and dogfighting the best. The Top Gun Maverick DLC will focus on the former. It is Microsoft Flight Simulator after all. I highly doubt there will be any actual dogfighting in the game.

You can look forward to soaring through canyons (something I’ve always wanted to do) and trying to land your very expensive piece of machinery on an aircraft carrier (something I’ve always failed at doing in video games). We doubt landing on an aircraft carrier will be as difficult as the infamous between-level scene in the Top Gun NES game, however. You can also look forward to just soaring through clouds and over the sea, taking in the game’s stunning visuals.

More information regarding the DLC will release closer to the launch of the film.