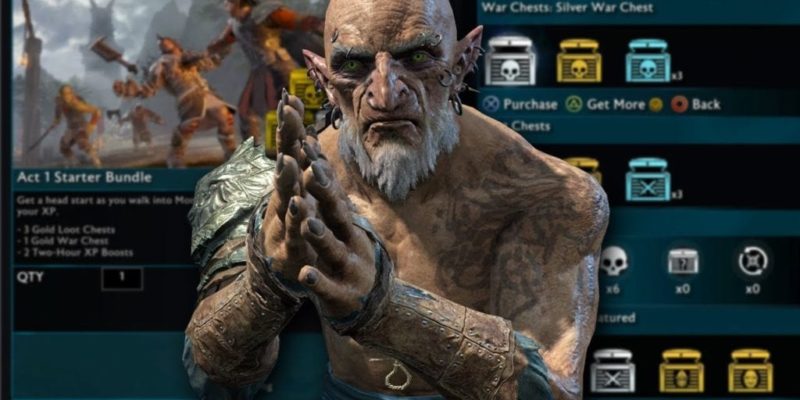 Warner and Monolith have decided that microtransactions have been hampering players enjoyment of Middle-Earth Shadow of War and six months after release decide to remove them.

In an update from the studio, they explain that perhaps the idea of purchasing Orcs was probably not the best idea for the game and that it undermined “the heart of the game”. Now Gold will be completely removed from the game and players will not be able to purchase loot chests.

The core promise of the Nemesis System is the ability to build relationships with your personal allies and enemies in a dynamic open world. While purchasing Orcs in the Market is more immediate and provides additional player options, we have come to realize that providing this choice risked undermining the heart of our game, the Nemesis System. It allows you to miss out on the awesome player stories you would have otherwise created, and it compromises those same stories even if you don’t buy anything. Simply being aware that they are available for purchase reduces the immersion in the world and takes away from the challenge of building your personal army and your fortresses. In order to fully restore the core promise of the Nemesis System, we’ll be permanently removing Gold, War Chests and the Market from Shadow of War. This means the option to purchase Gold with real-world money and the ability to gain Orc Followers from War Chests will be removed. There will be a specific amount of time given for players to utilize their unused Gold. If players have unused Gold by the end of the time allotted to spend it, any remaining Gold will be converted to in-game items.

The game will be getting additional updates when this change rolls out with an update to the Shadow Wars section of the campaign which will include “new narrative elements and streamlined for a more cohesive experience”.

These changes will all roll out on 17 July and an FAQ has been posted to make sure Middle-Earth Shadow of War players completely understand what is being changed.