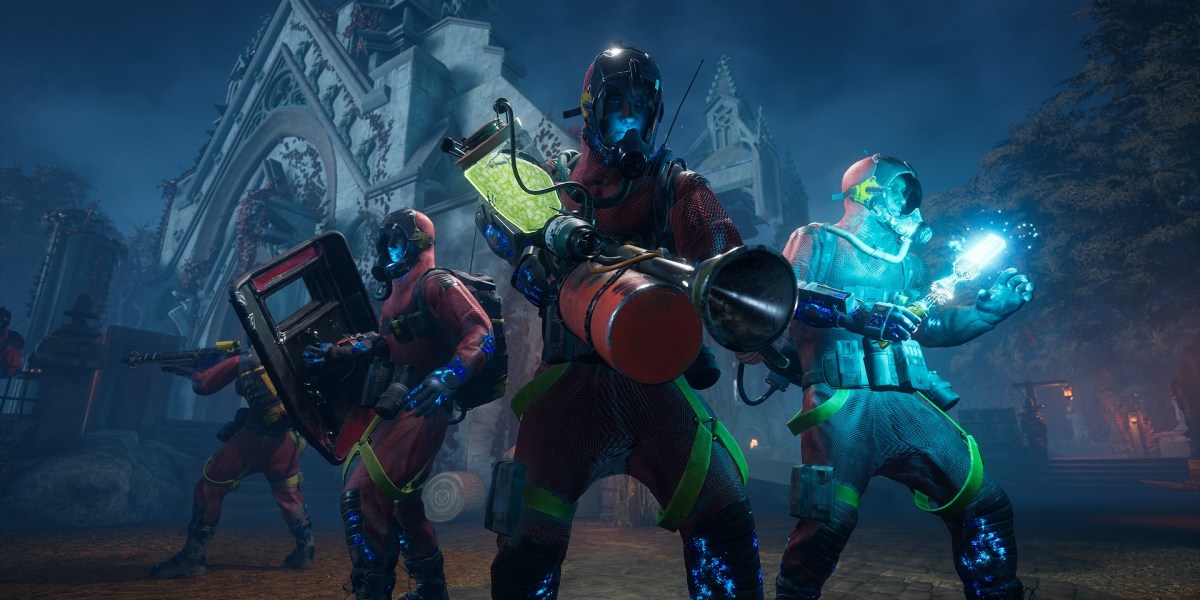 We first got word of Midnight Ghost Hunt way back in June of 2019, sending a chill of excitement up our spines. Its developer, Vaulted Sky Games, was looking to recharge the ghost-hunting and prop-hunting genres — at pretty much the same time. One could describe Midnight Ghost Hunt as a Ghostbusters-meets-PropHunt game, and that’s not far off the mark. The game has received alpha and beta tests, but I hadn’t tried my hand at it until just recently. I was able to jump in for a hands-on preview of Midnight Ghost Hunt, and had a spooky good time.

Midnight Ghost Hunt is a team-based, four-on-four multiplayer game. It sees a group of weapon- and gadget-wielding hunters facing off against some feisty poltergeists. But don’t think that the game paces itself like Phasmophobia; the heavily armed hunters are on the clock, and only have until midnight to clean house.

The conceit is in the game’s name. Hunters have until midnight to discover and subdue the ghosts, otherwise things get nasty. Matches are timed for five minutes, and once the clock strikes midnight, the ghosts become supercharged. Glowing red, they can deal enough damage to kill and turn the tables on their fleshy intruders. Hunters can still eke out a win after midnight, but it requires teamwork — and maybe some explosives. 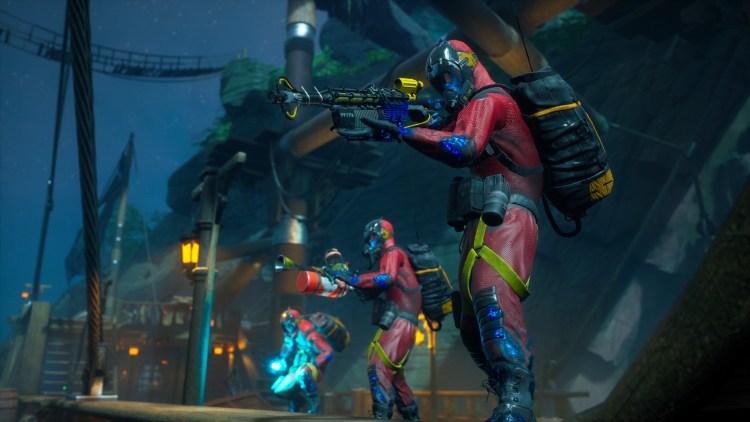 Indeed, it’s not as if the Hunters have it rough. Playing from the first person, you start each match choosing among an assortments of weapons and gadgets. You can start off with the intro-level Spectral Cannon, which fires glowing orbs of energy. There’s also a Salt Shotgun, the Reaper sniper rifle, and a Harpoon Bazooka that hooks and pulls ghosts toward you while giving them a shock. You can also go at it with melee weapons, or equip a Riot Shield if you’re expecting some resistance at midnight. Gadgets can range from Radar that spikes near ghosts, or C4 charges that dish out massive damage.

But the ghosts themselves are hardly helpless. While on the team of specters, the game shifts from shooter to a prop-hunting game. You can possess items around the map like pots, chairs, and the like. Items you can possess are highlighted, so even if you’re cornered you may find a quick escape. But like the Hunters, you can start off choosing among supernatural abilities. One allows you to make traps out of items, which fling themselves toward nearby Hunters. 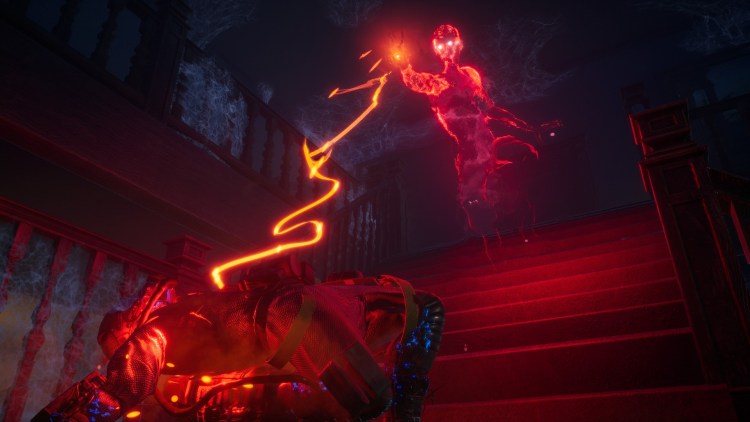 The back and forth action keeps things fresh, and the large, detailed maps add plenty of variety. I started up with my team in an archetypal haunted mansion, complete with a library and attic full of things to possess. We also went to a school, featuring a large gym and cafeteria. But I think my favorite was the pirate ship, which was docked near a winding cave system hiding mounds of gold and treasure. But I’m also a bit biased on the latter, as I’ll explain.

It all amounts to a pretty damn good time. As mentioned, my team and I started off roaming the dusty hallways of a creepy mansion. Running around watching my Radar, I smacked over books and chairs eager for a chance to start blasting. Fighting the Ghost team as a high-tech cleaner was exciting and often hilarious, as I found myself often chasing after some tea kettle that was bouncing over tables and up staircases. 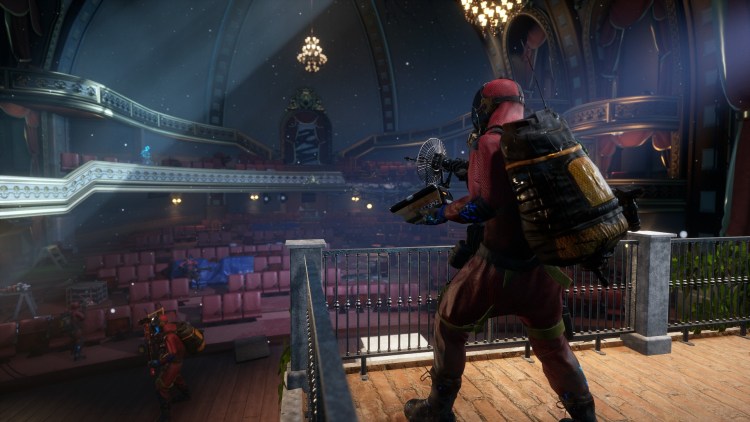 We won our first round, and I switched over to the Ghost’s side. Most of us managed to stay hidden long enough for the midnight hunt to begin. Possessing a suit of armor, I chased after one Hunter while swinging a sword. I managed to clip them once, but the hunk of metal was just too slow to move. Someone from the development team encouraged me to ditch the armor and try melee attacks as the ghost. Cornering my prey in the kitchen, I charged and… got blown up by C4. Right, it was my first game, so I’m learning.

My later matches saw more embarrassment by yours truly, but offered at least one moment of sweet redemption. The school offered many opportunities for Ghosts to get the upper hand. Chairs were scattered throughout the grungy cafeteria, and the giant disco ball in the gym was too tempting for one spirit. I eventually bagged a Ghost disguised as a toilet. But it did enough damage for its buddy to smack me down to the tile floor. Right, still learning. However, while haunting the pirate ship, my spectral team was struggling against a lone sniper. Possessing a nearby barrel, I held the right mouse click to charge a leap, aimed, and swatted them from the sky. As my team cheered, I felt vindicated. 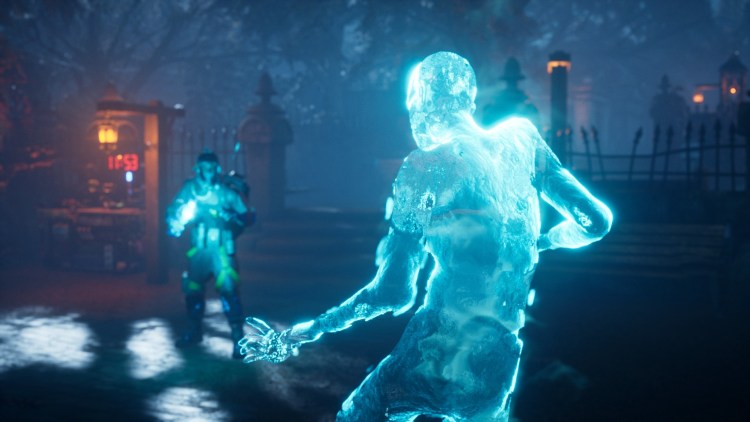 I’m ready to believe you

I only had an hour of game time to check it out, but I’m honestly ready for more. Midnight Ghost Hunt is a slick-looking, polished, and eerily enjoyable multiplayer game, and should give fans of ghostbusting and prop-hunting a good run. Midnight Ghost Hunt will no doubt offer plenty more moments of triumph and toilet-related defeat when it enters closed beta on January 28. To get in on the next playtest, head on over and request access on the game’s Steam page.