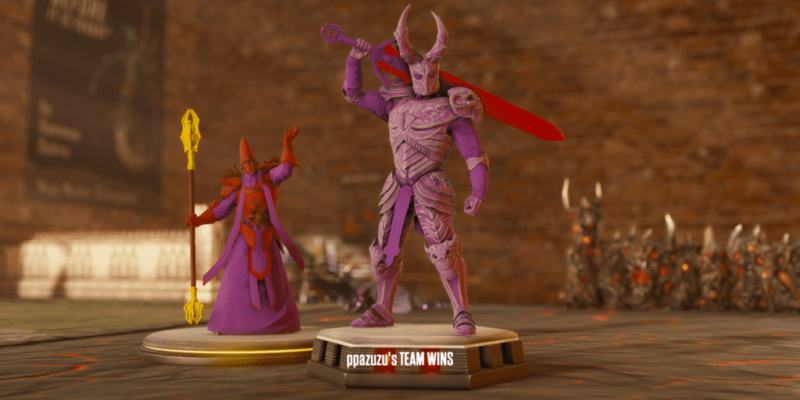 Series licenses often end up in weird situations, where the interests of business and the desires of a long-term fanbase no longer allign. EA’s decision to try out Syndicate as a first-person shooter is an obvious example here; the name meant little to anybody except the devotees of the original, and those same people were unlikely to be thrilled by an FPS revival. But EA owned the license, it was gathering dust, and Starbreeze were open to developing a shooter in that world.

Might & Magic: Showdown is going to run into similar resistance from series fans. It shares very little in common with prior games (besides a loose theme of ‘coalitions of fantasy creatures fighting’) and appeared as if from nowhere last week, with a simultaneous announcement and release on Steam’s Early Access. That in itself is a little awkward, because it results in another of those bizarre situations where both Uplay and Steam accounts are required for a game that isn’t even fully released yet. 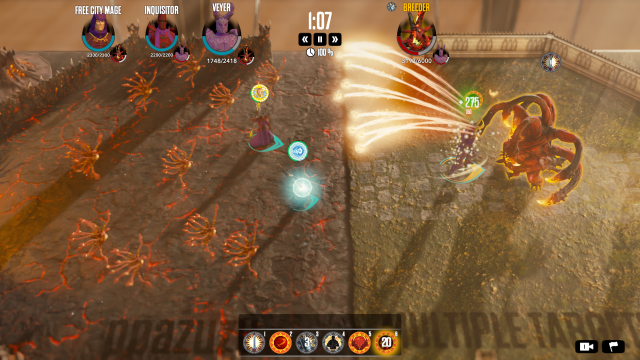 Pictured: Me, when I think too hard about a game requiring both Steam and Uplay.

That said, Ubisoft can actually publish Might & Magic titles which respect the origins of the series (Might & Magic Legacy X) or do something outlandish and brilliant (Dark Messiah of Might & Magic) when they put their minds to it. The divergence from prior titles (both the early role-playing ones and later Heroes ones) is annoying with no Legacy XI equivalent on the horizon, but it doesn’t necessarily dictate the quality of this game.

Showdown has one segment that I think few will have a problem with: virtual miniature painting. All your shading and drybrushing (highlighting, basically) dreams can come true in the title’s painting workshop, where you can come up with as many impressive or horrifying colour schemes as your time will allow. Locking some of the paint colours behind progress in the game is pretty irritating, but you get a decent set to start with and plenty of tools to help you slap together a theme.

You can opt to paint entire pre-selected segments at once, which is handy for popping down some base colours as a starting point, and every portion of a given miniature has three ‘layers’ (inking/shading, the base coat, and highlighting/drybrushing). With enough care, and a steady mouse-hand, you can paint absolutely freehand on any surface. There are tools to alter brush size and hardness, as well as one for making certain bits of the miniature temporarily invisible to (presumably) let you really focus on one section.

Virtual model painting is comfortably the best part of Might & Magic: Showdown, and, as luck would have it, is also the most free part. It’ll be around until mid-February over here. If anybody from Creative Assembly happens to be reading; this is exactly what a lot of people would love to see added to Total War: Warhammer. 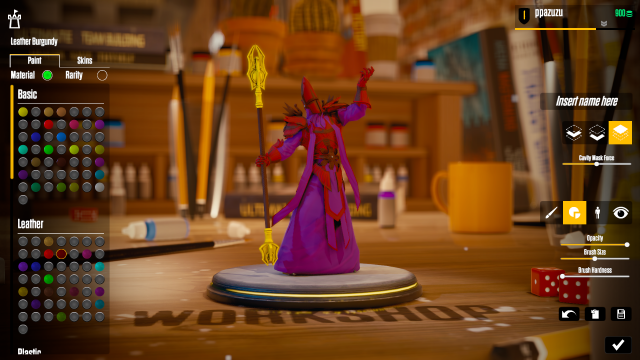 This one is from my purple period.

In between painting little 3D fantasy figures, Showdown sometimes invites you to play an actual game. You have to do this if you want to ‘collect’ more figures, because you’ll need the virtual currency (always a danger sign in a game like this), earned through winning matches, to purchase other miniatures.

Single player and multiplayer varieties are somewhat different, but do overlap in certain ways. No matter what, your force is going to consist of a selected hero (whom you control directly) and two or three support minions (who follow custom scripted orders). In multiplayer you’ll face an equivalent force, while in single player it’ll be a set of enemies designed to provide a particular type of challenge. Battles happen in real-time, and every character has a set of skills with cooldown timers. Winning, though, is less about your actions in the field (though there are some ‘synergy’ attacks that will help there), and more about the pre-match planning.

The most tactically interesting aspect of Might & Magic: Showdown at present is the AI scripting system you can play around with for your support minions. It resembles the AI instructions you could give your companions in Dragon Age: Origins; you set parameters and targets, then hope the creature’s instructions play out according to plan. You might, for example, tell your healer to focus primarily on keeping your hero topped up when he falls below a certain health threshold, or order your minion with the ‘taunt’ function to always aim for the enemy doing the most damage. Adding more attacks to a combo sequence with a ‘finisher’ will up the damage output, but at the cost of time spent casting. 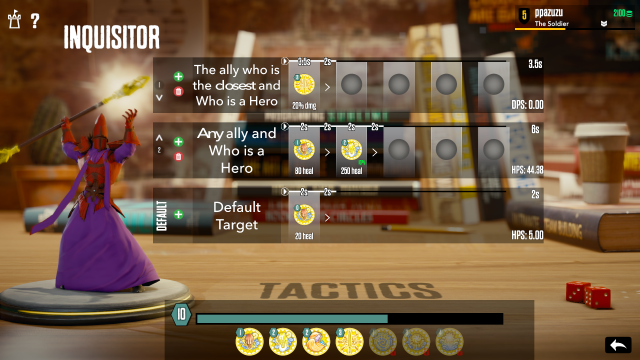 Once you get out of the obvious tutorial portion of the single player matches, they effectively start to take the form of stand-alone tactical puzzles. Here’s an Ice Dragon that can take control of your support characters one by one, how are you going to handle that? This particular enemy creature can ‘banish’ your guys if they get into close combat, what do you need to do to prevent this happening? There are only so many scenarios the developers can come up with, which is probably why there are only 30 levels (and another 30 ‘proving grounds’ but these are more like remixes), but the puzzle-like structure gels relatively well with the tactical minion scripting mentioned above.

The encounters aren’t always terribly consistent though, and can feel rather arbitrary if you don’t solve them the ‘right’ way. That aforementioned Ice Dragon can kill your hero with an absurdly powerful (something like 90,000 damage) attack if you take too long to finish him off at the match’s conclusion. So quite why he’s bothering to do the mind-control trick at all when he has that nuclear move in his arsenal is a bit of a mystery. Except not really; the answer is “so the puzzle works.” But it makes the whole affair feel rather artificial.

Despite this, I think I prefer the single player structure to the competitive multiplayer. This could just be my inherent preference for single player shining through, but the duels currently seem to be races to crack the DPS ceiling as quickly as possible. Murdering healers is a top priority for everybody (in time honoured fashion), closely followed by neutering the opposition’s DPS machine in whatever way you can. It’s difficult to make any sensible statements about multiplayer ‘balance’ at present though, both because the game is still in the flux of development and the overall player pool appears to be quite small. Getting a 3v3 or 4v4 miniature game hasn’t been difficult, but you may well run into the same people. 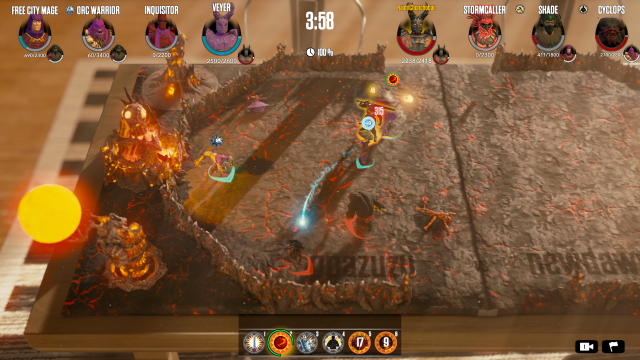 In my defense here, I had a cat in front of my screen the whole time.

That could obviously be a problem for a title that seems to be styling itself as predominantly PvP focused. Certainly, the single player aspects as they presently appear are more of a gateway into competitive play than a lasting occupation of their own. The PC settings at this stage are also an embarrassment, consisting of a ‘quality’ slider with no fine control over aspects like the aggressive depth of field effects present in the game.

Might & Magic: Showdown feels like an oddity. The manner of its release makes me question how much confidence Ubisoft has in the game, and while the single player has niche potential in its puzzle encounters, I fear the 30-odd levels have already stretched the mechanics about as far as they’ll go. PvP, meanwhile, will stand or fall on its player count (which for now seems small, but engaged), and whether the development team can prevent an ‘ideal’ team and tactics set-up emerging. That leaves the title in the very unusual position of its most compelling aspect (the figure painting) being available for free, and its less interesting portion (the actual game) costing $20.

GamePump subscription service shuts down, refunds for all