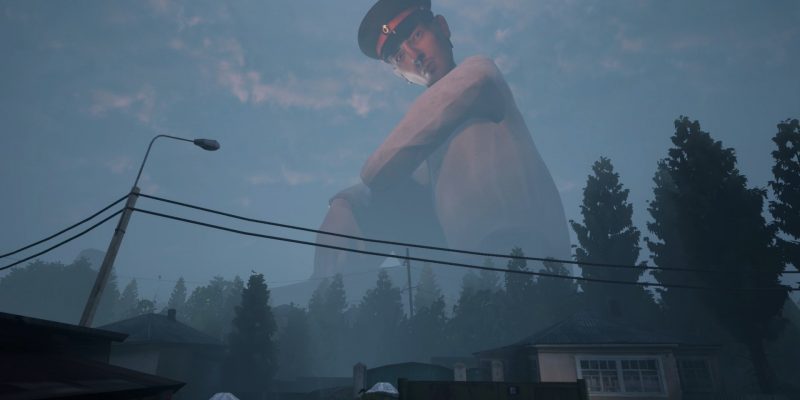 Indie games are great because they usually offer experiences you won’t find in a triple-A game. However, the experience players can expect in Militsioner, a new indie title from developer Tallboys, seems to be distinguishing itself even in indie circles. A reveal trailer for Militsioner debuted today, revealing the game’s main antagonist, a Russian cop scaled up to the size of Galactus.

From the start of its trailer, Militsioner sets itself apart. The game uses voice recognition that lets players actually talk to characters in the game world. It doesn’t seem like players have to choose any dialogue besides what they want to say. Speaking to characters will likely be a huge part of the game, as it’s the only way to communicate with its giant antagonist. Over the course of the entire trailer, a massive cop is sat down right outside of the city. He’s so large and far away that he appears slightly hazy, and his voice booms, likely shaking the ground and windows. Of course, he’s still a cop (assumedly with a salary), so players can swear at him as much as they want and he can’t do a thing.

Outrunning the cops is harder when they’re 50-miles tall

The reveal trailer for Militsioner, while trippy, showed that it’s a game about escape. The player character can’t leave the town they’re in for some mysterious reason. It’s up to players to guide them safely away from the ever-watching eye of this literally big brother.

It won’t be easy though, as the massive cop has a ton of options for thwarting players. Naturally, he can just pluck you right out from the town, hopefully not crushing you in the process. He also has a flashlight, meaning escaping at night isn’t any advantage. And this is all while he’s sitting down, so if he has to chase you, there’s no competition.

So far, Militsioner doesn’t have a release date. However, the game is available to pre-order on Steam here.