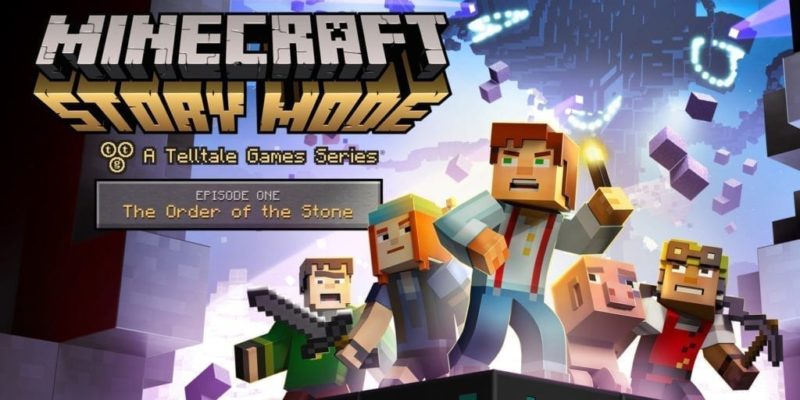 Developed by Telltale Games, along with Mojang, Minecraft Story Mode: Episode 1 — The Order of the Stone, is set to launch in just a few short weeks.
Today, the developers have released a minecart-load of details about the upcoming blockbuster title.
First off, the cast details have been revealed: Patton Oswalt as male Jesse, Catherine Taber as female Jesse, Brian Posehn as Axel, Ashley Johnson as Petra, Scott Porter as Lukas, Martha Plimpton as Olivia, Billy West as the narrator, and Paul Reubens as Ivor. Also announced today, in the role of the four ‘Order of the Stone’ members, Dave Fennoy as Gabriel the Warrior, Corey Feldman as Magnus the Griefer, Grey Griffin as Ellegaard the Redstone Engineer, and John Hodgmanas Soren the Architect.
The first episode of this 5-part series will be available for PC and Mac, as well as old/new-gen console users in both retail and digital formats. Digitally, the title will release on Tuesday, October 13th — just a few days away. You can find it on the Telltale Online Store, Steam, as well as other digital distribution services, including the PlayStation Network and XBOX Games Store.
The title’s retail release will feature a season pass disc, which is set to launch on Tuesday, October 27th in North America and Friday, October 30th in Europe. North American retailers will launch with all aforementioned console versions, as well as European retailers with the addition of the PC platform. This season pass disc will include the first episode of the series, and will also unlock the 4 following episodes upon their release  via online updates. In addition, the game will also be available on iOS and Android devices starting on October 15th, as well as Wii U and PlayStation Vita at a later date.

Telltale Games and Mojang will also hold a special world premiere launch event for the game, in Hollywood, CA on October 12th at the ArcLight Cinerama Dome. The Minecradt community, as well as fans of Telltale are all invited to join in what’s being dubbed the “World’s Largest Let’s Play”. This interactive experience will allow the audience to cheer and direct the action that will be taking place on the big screen. Tickets are completely free, although you need to make sure you email minecraftpremiere@telltalegames.com to get more information. Keep in mind that seating will be limited and tickets will be offered in advance on a first come first served basis.

Finally, check out the brand new trailer for Minecraft: Story Mode Episode 1 — The Order of the Stone!