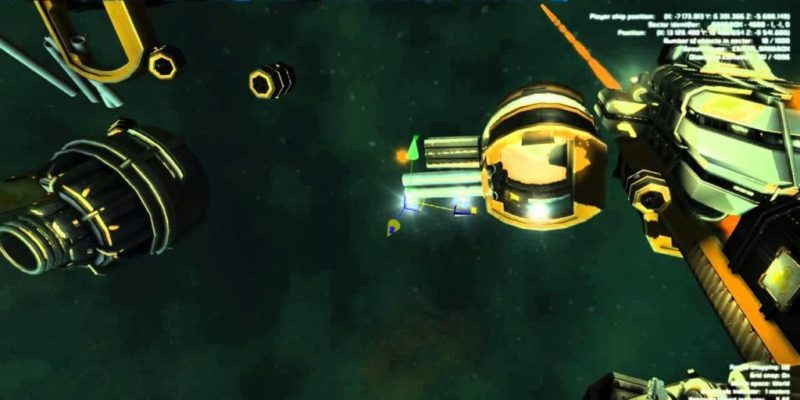 So you thought you could build in Miner Wars, but it was clunky!? Well this is the update for you. We’ve tweaked up the editor and it’s possible to build a mother-ship in about three minutes!  We’re going to show you how to speed build in our creative environment. As always you’ll be able to save sectors to our servers, but now you’ll also be able to cut and paste from sectors and modify as you see fit. So you can make a multiplayer level very quickly and incorporate a few buildings or asteroids from other select maps for the perfect fight scenario.

The in-game editor has been revamped to be more intuitive and be more robust. Now anyone will be able to make creative and complex structures with ease. We know it was a bit difficult in earlier builds to get the hang of things, but we’re streamlining the process and adding more powerful tools! We’ve added hundreds of new prefabs, and have also allowed more control over your environments.

While enhancing our VRAGE engine, we’ve added many of these new features to the editor as well. The new Copy Tool will allow you to cut and paste from other sectors to your own! We have introduced influence spheres to set events, from setting radioactive areas to creating an eerie mood with ambient sounds. You’ll be able to control spawn points for bots and players, and set way-points for bots for patrols or missions. Things have never looked this good, until you get a hold of the dynamic lighting and particle effects in our editor. No more boring dark caves of a base, pick a color and don’t be afraid to accent it with a few particles here and there!

And don’t worry our staples are still here, you’ll have voxel hand to create your own custom asteroids! But now all those items you’ve been looking at in the editor are in use. Time to play with the new: Cameras, turrets, HUBs, computers, scanners, alarms and much more! If you haven’t touched the editor as of now, this is a great time to dive into it! We’re excited to see what other’s do, when they have the same power to create missions as we do! Slowly but surely we’re implementing new features to add more power to the user! Can you control the power?

To get you up to sonic speed building, we’ve included a few speed-building videos to show you how it’s done!