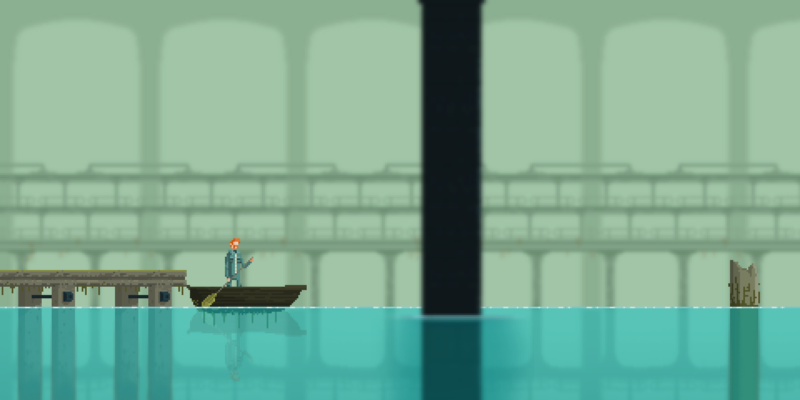 It’s very rare to see a modern title that tries to replicate games like Prince of Persia and Out of This World. Sure, there are puzzle platformers like Limbo and Inside, but those never really gave me the same kind of feeling that the classics did. Ministry of Broadcast is very successful in that regard. But it also aptly demonstrated to me that I’m glad that more games don’t ape the classics.

Ministry of Broadcast tells a story that’s part Nineteen Eighty-Four and part Running Man. It takes place in a Dystopian nation that is ruled over by the titular ministry. Years before, the ministry built a wall and then kept building them. Now they hold a game show that supposedly offers people visas to go beyond the wall. Or walls. It’s not clear.

You play as a redheaded man known only as Orange. Orange wants to win a visa to visit his family whom he somehow became separated from. Along the way, he finds himself committing heinous acts in the name of achieving his goals. Although the game appears plot-heavy, it isn’t. There isn’t enough context, characterization, or world-building for it to be particularly interesting. 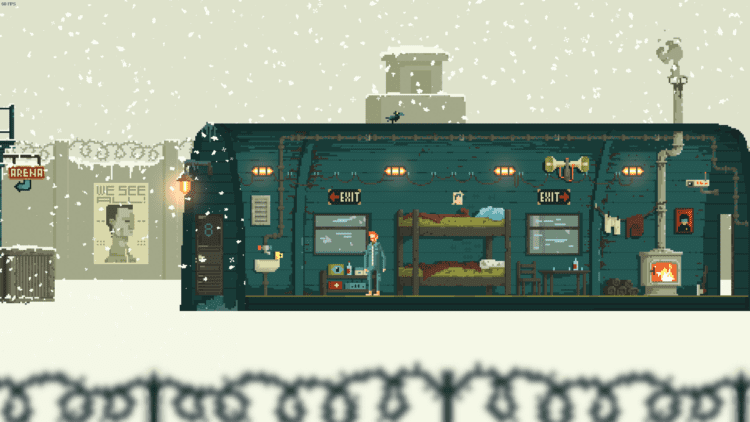 You get the top bunk. Joe called dibs on the bottom one.

Ministry of Broadcast seems to hint at modern political satire with all the talk of walls and voting for either blue or red, but this is more window dressing than anything else. Much like Spec Ops: The Line, it forces you to do horrible things to progress and then points out that you might be a monster for following the game’s orders and playing a game like this. But it all falls flat and lacks any semblance of depth. The dialogue is generally well-written, however.

The wrong kind of flashback

As a “cinematic platformer,” you’ll be running and jumping around, pushing boxes, hitting switches, and climbing things. It feels exactly like its forebears in this capacity. It gets the look down too. The pixel art here is wonderful. It’s detailed, full of character, and quite atmospheric to boot. However, whether or not you’ll enjoy Ministry of Broadcast will come down to not only how much you like the games from which it takes inspiration, but if you would still find them worth putting up with after decades of advancement and a lack of nostalgia goggles.

Remember how those games had stiff, awkward controls and required huge amounts of trial and error in addition to requiring a great deal of accuracy? Ministry of Broadcast not only remembers but thought all of that needed to be present and accounted for. While these controls may have been acceptable 30 years ago, they’re terrible now. 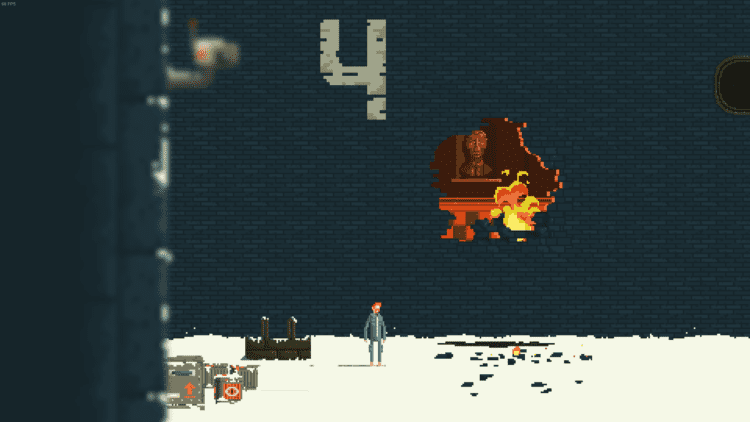 Glad to see they keep this place in tip-top shape.

To put it blatantly, your greatest foe here isn’t going to be perilous jumps, steep drops, or dogs. It’s the controls. They fight you at every turn and they’ll likely end up winning more often than not. A massive amount of my deaths in Ministry of Broadcast were simply from the controls failing to work correctly. When combined with the ridiculous levels of precision the game demands, it makes for a truly obnoxious, frustrating experience.

As long as I fall

The controls aren’t particularly responsive, smooth, or intuitive. The game’s many jumps and traps often demand pixel-perfect input on your part. If you fail to do so, you die. Walking feels too sluggish and running is unwieldy. The inherent sluggishness in the former makes being accurate more feasible, but trying to stop at just the right spot while running is oftentimes completely up to luck.

And that’s especially true when it comes to jumping. Orange can either jump upward or to the side. But you need to be standing perfectly still to jump upward. However, you’ll frequently find yourself pressed for time and will need to climb upward as soon as possible. Even if I stopped running at exactly the right moment and just wanted to grab the ledge I very carefully positioned myself underneath, Orange would jump to the side. 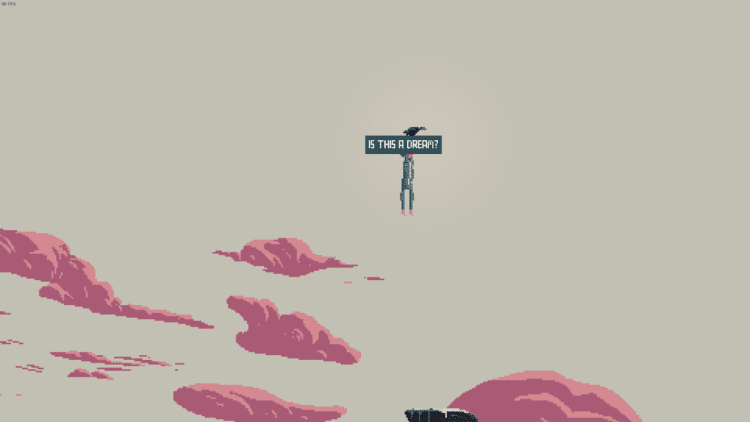 It’s more like a bluish-grey nightmare than a dream, Orange.

Similarly, I’d find him reaching for a nonexistent ledge when trying to get him to leap across a gap. There are also issues with getting multiple jumps to behave the same way, even if your input is consistent. There are many scenarios where you’ll need to repeatedly restart a segment, and I often found that I would fail a jump regardless of whether I did anything differently.

The time-sensitive sections are by far the most aggravating ones. One of my least favorites started with the checkpoint placed before a puzzle that could go awry if the controls didn’t respond as I hoped. I then had to race through a radioactive room I had already navigated. Orange dies if you stay in the room too long and there’s no timer. My previous excursion in this room gave me plenty of time to get to the exit, but this second one required me to do it literally perfectly.

Anything short of landing each jump perfectly and lining myself up with ledges with pinpoint accuracy would result in my death, oftentimes when I was a foot away from the exit. It’s maddening to successfully make it through a puzzle solely based on how kind the controls felt like being. 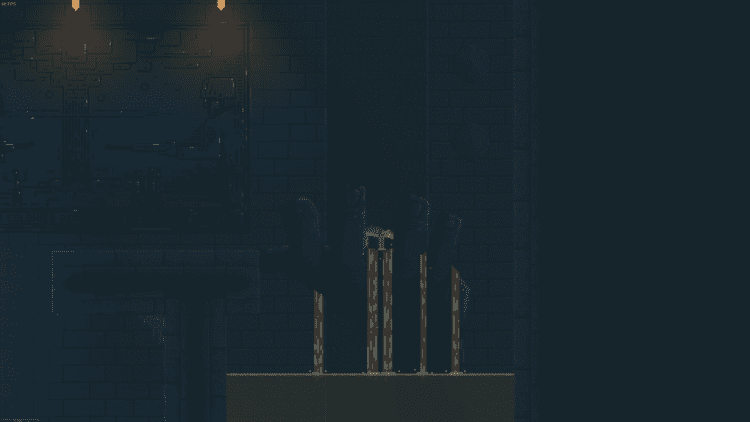 Really gotta hand it to ’em.

And climbing ledges is weird too. You have to be pointing your character’s body in a specific direction to have him climb up or down. Strangely, the best way to handle this is to hold the button, which will see him automatically ascend or descend when applicable.

Some sections in Ministry of Broadcast also have multiple deadends meant to trick you. On a timer. While you’re struggling with the controls. The game seems pretty keen to waste your time in general. Occasionally, there are actions you can take that will send you on a wild goose chase for an extended period, such as a late-game section where the game lets you slide to the side on ice for a long while, only to kill you with an icicle once you make it a certain distance.

Thankfully, the game’s puzzles are pretty decent. They mostly revolve around Orange bypassing obstacles by forcing the other contestants into hazards. Many of these puzzles are also rather clever, but they likely won’t stump most players for any questionable lengths of time. The difficulty of these feels just right. But they are dragged down a bit by issues with the game logic. 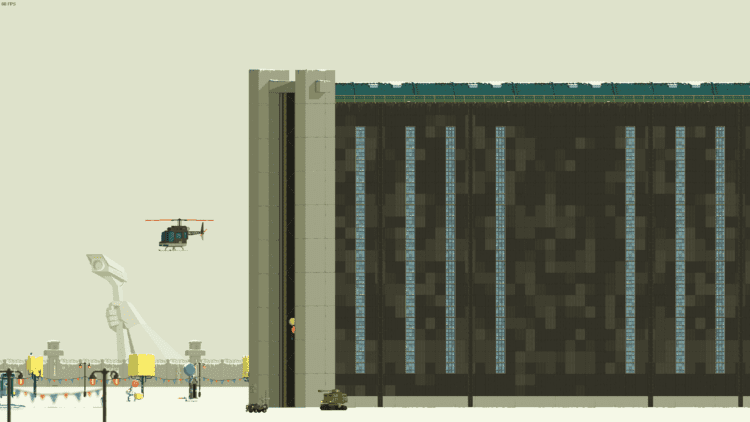 Some of the locations are truly visually-impressive at times. Regardless of its faults, this is a very nice-looking game.

You’ll often have to contend with dogs and cops who will, in classic cinematic platformer form, give chase and kill you in one hit. But there are problems with how they operate. They’re supposed to respond to other NPCs just like they respond to you, but they’ll typically ignore them if they can get to you first. It’s weird to see a cop beat you with a baton and then just stand there and look at an NPC until you press the restart button.

Similarly, they sometimes break through doors that are closed if you cut your escape too close. One of the most jarring of these was when a guard shot me through a vent from below. They’re only supposed to shoot when you make sound, but sometimes they shoot you anyway. And sometimes you can be multiple feet away from their bullets and still die.

Ministry of Broadcast is a good length for this sort of game. I’d imagine it’ll take most players around 6-7 hours, depending on how often they meet a grisly fate. There are some things to find off the beaten path as well, so there are certainly reasons to look around. The game’s main “collectible” is that Orange gets his shoes stolen at the beginning of the game and he finds other pairs scattered around. Humorously, he can never wear them for one reason or another. 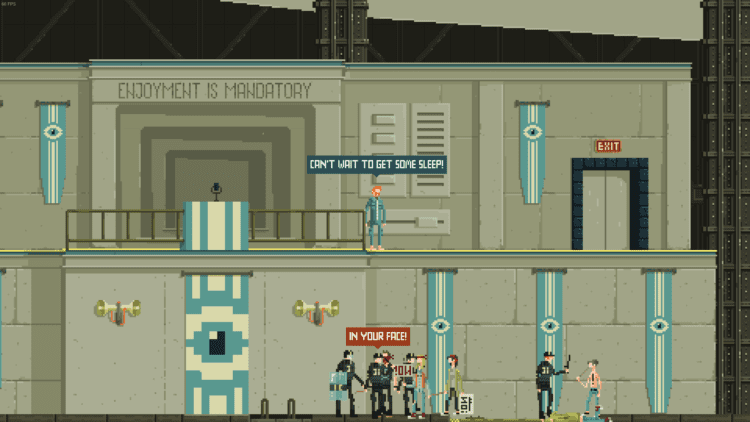 Police brutality is one of the main recurring themes in the game. Just like all the other themes, though, it does nothing with it.

Best as I can tell, there’s only one path through the game, plus a binary choice at the very end. I might be mistaken, though. These sorts of games go well with speedruns, however, which I could see happening here, despite how unreliable the controls are.

Simply put, Ministry of Broadcast is a dead-ringer for the type of game it emulates. However, it isn’t a good game. It has sloppy, imprecise controls yet demands remarkable amounts of accuracy. Anyone who sees this game and goes, “Sweet! I’ve been dying for an old-school cinematic platformer!” will possibly enjoy it, warts and all. But anyone whose experience with puzzle-platformers is more recent will likely be very put off by the game’s myriad problems. By the later part of the game, I was practically begging for it to end, as I didn’t want to have to practice a single more perfect run, only for it to get ruined by the controls failing me for the umpteenth time. 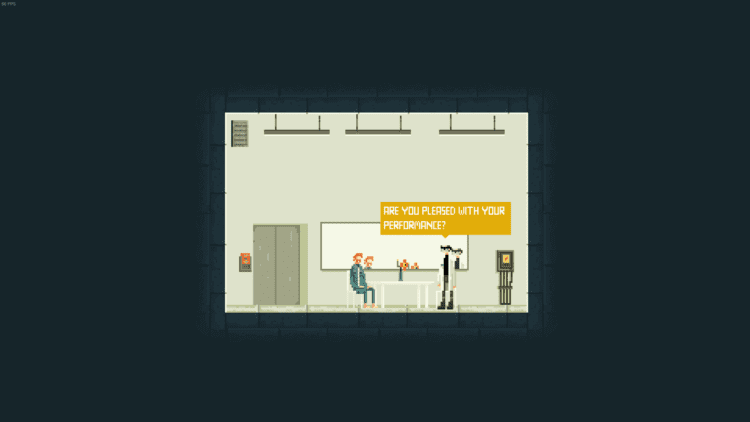 I’m not at all pleased, believe me.

Ministry of Broadcast is very much like the games it takes inspiration from. But the insanely unreliable controls and the obnoxious slog of the game's tedious, trial-and-error platforming sections will likely try the patience of anyone who isn't looking for a blast from the past.

How to make money in Temtem – a guide to Pansun farming