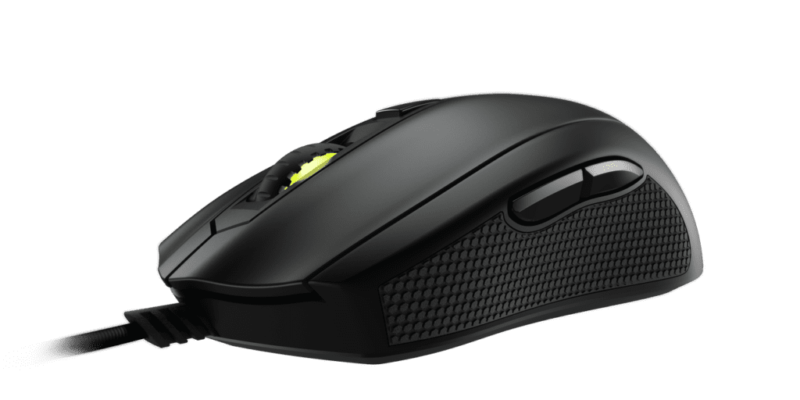 How best to review a mouse? I realise that’s an alarming hypothetical question with which to open this impressions piece about Mionix’s latest design. But bear with me, it’s worth dwelling on.

A lot of peripheral reviews will retreat to press release bumph or dispassionately list off some bullet-point features to fill their word count. These bits of information do have value in conveying what kinds of things the mouse can do (and I’ll be going over some of that shortly), but the heart of any mouse-related article should surely be an attempt to express how it feels to use.

Not exactly straightforward of course, as everybody’s hands, desktop set-up, and tactile responses are going to be a little different. Nonetheless, I’ll do my best. 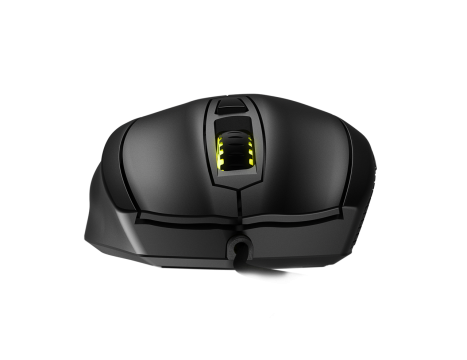 It’s coming right for me!

To get some hopefully obvious disclosure on record; this mouse was sent to me by Mionix (or public relations agents acting on their behalf, anyway) for the purposes of review. Its intended retail price is $70.00 USD.

Mionix are based in Sweden, and the Castor’s tidy packaging lets you know this by having “Designed and engineered in Sweden” written on it. Keep reading, and in slightly smaller letters underneath you will discover the phrase “Assembled in the People’s Republic of China”. Not a huge surprise. You could probably have guessed that about an electrical device built in 2015.

Anyhow, the Castor seems perfectly well assembled, so the Chinese part of this production process have held their end up. I’m in no position to test the longevity of the parts, but there are no immediate warning signs after ten days of pretty heavy (8 hours or so) use. 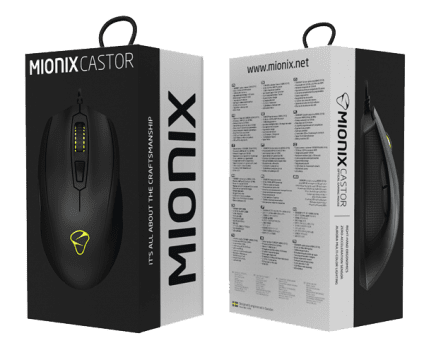 I know, using a picture of the box is a bit lame. But it is a nice box.

The Swedes have done a fine job too. Lower to the desk and a little smaller than the Logitech M500 I was using previously, the Castor is a right-handed, optical, six button mouse. Those buttons are: the usual left and right clickers, a scroll wheel, a DPI selector behind that, and two more buttons on the left-hand side of the mouse, above where your thumb will sit.

It boasts of being ergonomically designed for the three main ‘palm, fingertip and claw’ grip styles, and based on this image of that triumvirate, my own style is somewhere between palm and claw. Not quite such a preying mantis claw stance as featured in that picture, though. That looks quite painful.

Assuming that my hybrid stance covers both palm and claw to some extent, I found the Castor to be a comfortable fit for that style pairing. Ring and pinkie fingers rest underneath a small right-hand groove, and the thumb sits against a textured, friendly rubber pad. The scroll wheel/middle button is also a lot more consistent and reliable than on the Logitech M500, which would often give me problems in games when something important was mapped there.

It’s a little tricky to reach the foremost button on the left hand side with my thumb (and quite easy to press the rear one a bit at the same time), so I wouldn’t recommend assigning that to anything vital. I had the same problem with the Logitech’s forward/back side buttons too and tended not to use them much as a result. Maybe my thumb is to blame, I don’t know.

The USB connection cord is a pretty healthy 2m in length, and has that nice ‘sturdy shoelace’ style to it. 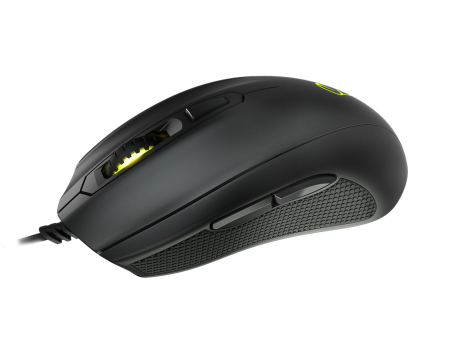 There’s that rubber-textured thumb rest bit I was talking about.

The Mionix Castor feels suitably snug, but what about some of those aforementioned technical gubbins? Configuration software for the mouse has to be downloaded from the Mionix site (so if you’re one of the very few people in the overlap on a “interested in a designer mouse” / “doesn’t have the internet” Venn diagram, that’s unfortunate), and offers various ways to customise your new peripheral.

Under ‘Mouse Options’, buttons can be reassigned to different tasks (and saved to one of five profiles), scrolling and double-click speed can be altered, and it’s possible to add some mouse acceleration if you’re a very strange person who likes that sort of thing. This is also the screen where you can alter the ‘Polling Rate’ (125hz, 250hz, 500hz, or 1000hz). I believe this setting determines how often the USB port checks for the mouse still being there.

‘Sensor Performance’ is a bit more specialised. Here, you can change the three DPI settings for the Castor. A range of 50 to 10,000 is on offer (or “pointer barely moves with an exaggerated arm jerk” to “pointer ends up on Venus if you breathe near the mouse” if you prefer), with more sensible defaults of 3,000 / 5,000 / 7,000. This is also where you can fine-tune the pointer speed, alter the ‘Lift Distance’ (which, to be honest, I never entirely figured out) and, rather helpfully, do a surface analysis of your desk or mouse pad.

Selecting that option urges you to waggle the mouse around for a bit, and then attempts to set an appropriate pointer speed and Lift Distance for you. I fine-tuned the pointer speed a little more after running this, but it managed to create a pretty decent base to work from.

Then, of course, there are the LED lighting effects. I’m not too sure when putting lights on PC peripherals and hardware became de rigueur, but the Castor couldn’t resist joining that colourful parade.

Mercifully, these lights are both relatively restrained (as long as you don’t make them flash) and can be switched off entirely. They’re nowhere close to the obnoxious brightness of, say, the light-bar on the back of a Dualshock 4 controller.

You can, if you wish, set the colour of your choice, and choose from various modes like ‘Breathing’ and ‘Pulsating’. The lights illuminate the scroll wheel and the Mionix symbol at the ‘base’ of the mouse (where your palm would probably sit). Each one can be made a different colour if you really want to be distracted. 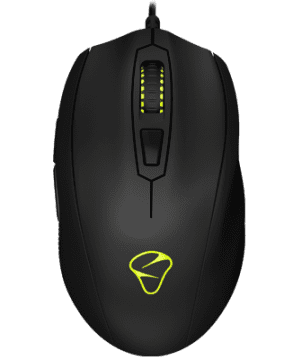 A top-down shot. You know, for variety.

The Castor has performed very well in the mouse-based games I’ve been playing recently. Those that have demanded most precision would probably be Company of Heroes 2 (for accurate movement orders, attacks and the like), Satellite Reign (which needed close, real-time control over four cyberpunk agents), and the Black Ops 3 beta. Though that latter example didn’t give me quite the twitch-shooter test I’d hoped for, due to the beta performing pretty poorly on my PC. Still, none of my hopeless deaths could really be attributed to the mouse.

I’ve also used the Castor in Pillars of Eternity’s ‘White March’ expansion (where there isn’t really any time-pressure over movement) and for testing out the mouse and keyboard controls in impressions pieces about the PC versions of Mad Max and Metal Gear Solid V: The Phantom Pain. The individual Pillars of Eternity sessions got fairly lengthy (3-4 hours or so), but the Castor remained comfortable to use throughout.

In terms of response, comfort and ergonomics, Mionix’s latest mouse is a noticeable step up from my prior Logitech M500. But then it should be, as it costs around $40.00 USD more than that more budget-oriented mouse.

Whether it’s worth breaking out of the serviceable $30-40 mouse range for the $70 Castor is largely going to be down to your disposable income for peripherals. It’s a bit of a luxury item, and, if my experience is in any way universal, extra cash in the PC budget tends to be squirreled away for things like GPU upgrades as a priority. It’s an impressive, six-button mouse that suits my dual needs of straightforward desktop work and gaming precision very well, but the benefits do come at a (quite literal) price.

The Mionix Castor is available this month (September) at the retail price of $70.00 USD.

Divinity: Original Sin 2 gets enough bread to develop the undead

By A.K Rahming11 hours ago
Features