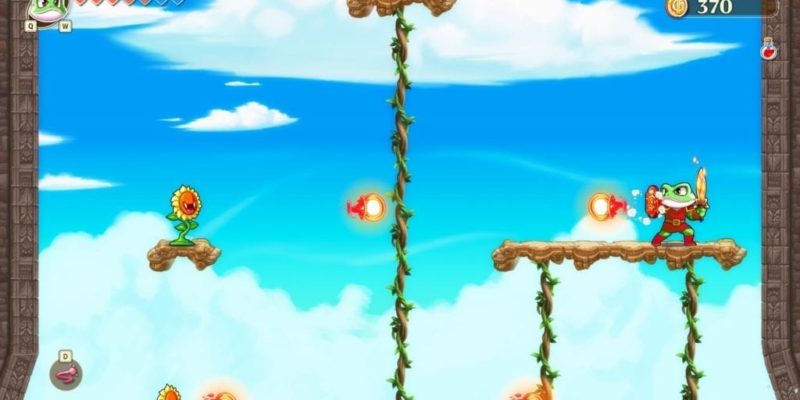 I just wanted to get to the other side of the chasm. All I needed to do was ride the undead fire dragon and I’d be home free. But Monster Boy and the Cursed Kingdom had other plans for me. Enemies were there to knock me down. Obstacles appeared one after the other. And then the game faked me out and let the dragon take me to my death when I was supposed to switch to a separate, unseen dragon. Each time most of these happened, I was forced to restart this lengthy section over from the beginning. And the developers adore this kind of thing.

Monster Boy and the Cursed Kingdom started life as a sequel to the game Flying Hamster, which was mainly sold via PSN and app stores. Upon failing to meet its goal via Kickstarter, the project was rescued by FDG Entertainment, who then arranged for the game to be part of the Wonder Boy franchise. It couldn’t use the Wonder Boy name, however, as that is held separately, so it went with something strongly reminiscent of it. And the team at Game Atelier did a great job of making it feel like a Wonder Boy game.

The cat’s in the bag, and the bag’s in the river

The game has a fairly simple setup. You play as Jin, whose uncle, Nabu, is terrorizing the land and turning people into animals. Upon confronting Nabu, Jin is transformed into a pig and seeks the help of the king’s advisor, Mysticat. Mysticat tells him to seek out powerful orbs that will allow him to undo the changes and save the kingdom. The plot is extremely basic and very familiar. It even does that thing where the final boss, whose name might as well be Generik von Evilton, doesn’t even really show up for the first time until you fight them. The dialogue is well-written, though. 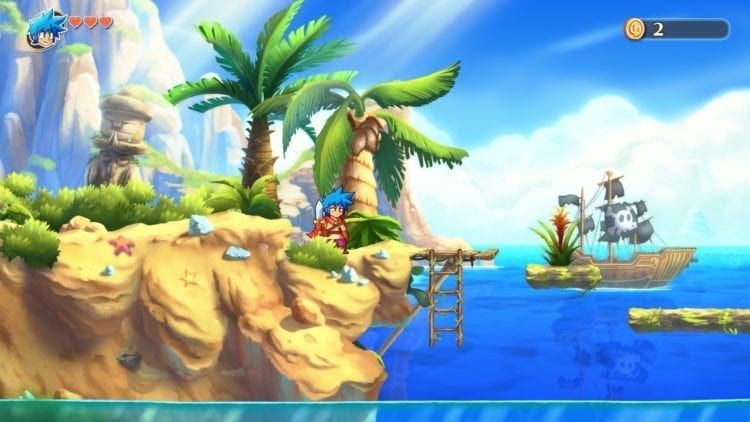 Structurally, Monster Boy and the Cursed Kingdom is a Metroid-type game. You explore to find new animal forms and items that allow you to reach new areas. The animal forms serve unquestionably as the stars of the show. You start the game in Jin’s human form but lose access to this upon turning into a pig.  You then gain access to a snake that isn’t much better. But the animal forms get better and better as you go, allowing Jin to transform into a frog that can swim underwater, a lion that can dash for long periods, and finally a dragon form.

The game does an excellent job of requiring you to switch between these forms on the fly. Pressing the shoulder buttons opens a radial menu that pauses the game and allows you to do so immediately. And you’ll often have to switch between them with very little time to spare. Thankfully, this is fast and fluid. Switching between forms to survive and solve puzzles works great and is the strongest aspect of the gameplay. The exploration is also excellent, as the different forms are fun to control and all have to be used to navigate.

The combat, however, leaves something to be desired. It’s fine for what it is, but I never found it particularly enjoyable. Jin often seems to either do too much damage or not enough depending on the enemy. Vice versa, some enemies do way too much damage or so little that they’re negligible. The lion’s dash can also trivialize many enemy encounters as he just runs straight through them. And I managed to find a weapon fairly early on that maxed out my damage. These aspects just don’t seem as well thought out as the rest of the game. 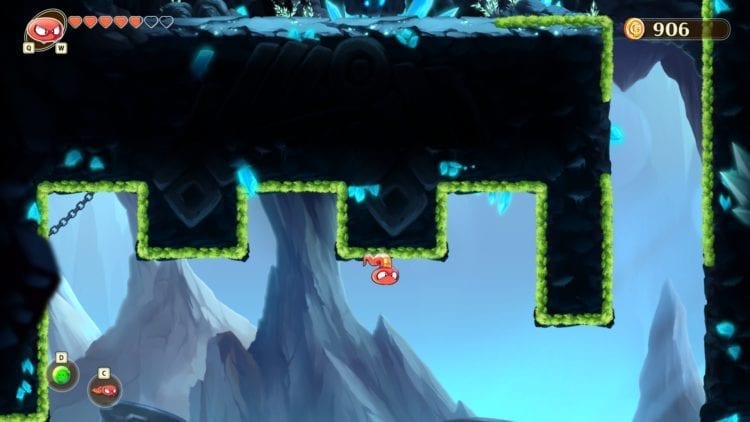 Monster Boy and the Cursed Kingdom divvies its time up between combat, platforming, and puzzle-solving. The game’s controls work excellently but, for whatever reason, they just never clicked with me. The level design is strong and there’s a lot of variety, but I just didn’t enjoy my time with the game all that much. It wasn’t because of difficulty either. The game isn’t hard at all, but it frequently gets tedious and obnoxious. As I mentioned in the opening paragraph, the game simply loves to force you into annoying encounters where making a single mistake forces you to restart long sequences from the beginning.

These sequences are a big part of why I found the game as annoying as I did. They’re all doable with practice, but I kind of hated a lot of them. Insta-kill spikes, insta-kill bombs, falling in lava, having stuff knock me off platforms suddenly. It’s all here, and it’s all a pain in the ass. I wanted to love this game, but I just couldn’t. It’s a good game, but I feel that it’s marred by these obnoxious design decisions that sucked a lot the fun out of it for me.

The puzzles, by and large, are very clever. But the balance between gameplay styles seemed off to me. Monster Boy has two dungeons that I can only describe as totally Zelda-ish. These two are much longer than everything else and feel at odds with the rest of the game. Sometimes puzzle solutions are unclear and weird too. You spend the biggest part of the late game exploring a big haunted mansion that felt too big. It also focused almost exclusively on large, interconnected puzzles, which made it stick out from the rest of the game like a sore thumb. Some of the solutions to these puzzles seemed nonsensical at times too. 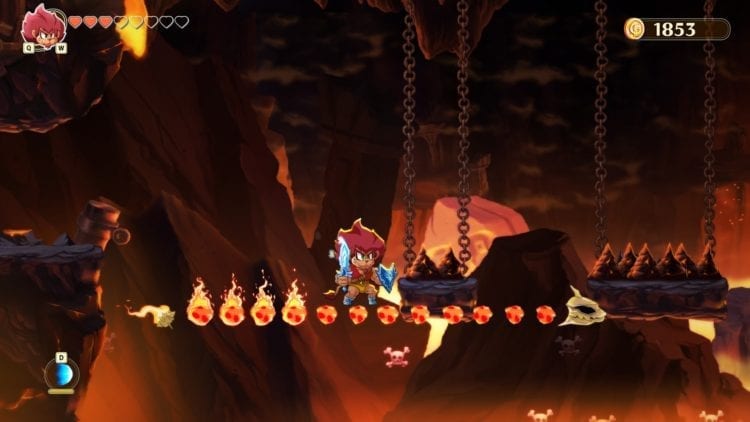 Monster Boy and the Cursed Kingdom might have rubbed me the wrong way a lot of the time via gameplay, but it’s truly gorgeous. The sprites are all hand-animated and are all charming and lovely. The levels themselves are stunningly realized, with great use of color and impressive backgrounds. Animations are silky and fluid. It’s a cartoon come to life, and I doubt the devs could have done much better.

The game has a good amount of content too. I came in expecting a shorter title, but it took me around 14 hours to beat the game. People looking to obtain all the items can add several hours to that number as well. There are so many things to collect and hunt for. Some shops sell new items and equipment, all of which you can upgrade with gems you’ve found. I didn’t buy much of this equipment, though, as a lot of it isn’t useful at all, nor did I typically feel like I’d need the extra edge. There are ultimate weapons that you can forge after finding five pieces strewn throughout the game, but there’s no way you’ll need them.

I did mostly enjoy the game as a whole and don’t regret my time with it, but it feels uneven and frustrating to me a lot of the time. That doesn’t change the fact that this is a beautiful game with some great ideas on display. Most of the puzzles are interesting, the animal forms are fantastic, and the controls are spot-on. Monster Boy and the Cursed Kingdom is worth a look for fans of exploration-based action-platformers. And if the game comes together for you in a way it doesn’t for me, you can have a great time with it. I just wish it didn’t go out of its way to be so annoying.

Monster Boy and the Cursed Kingdom

Monster Boy and the Cursed Kingdom has a lot going for it, but its frustrations and pacing issues are a detriment to the overall experience.

The Blackout Club review – Things that go clunk in the night