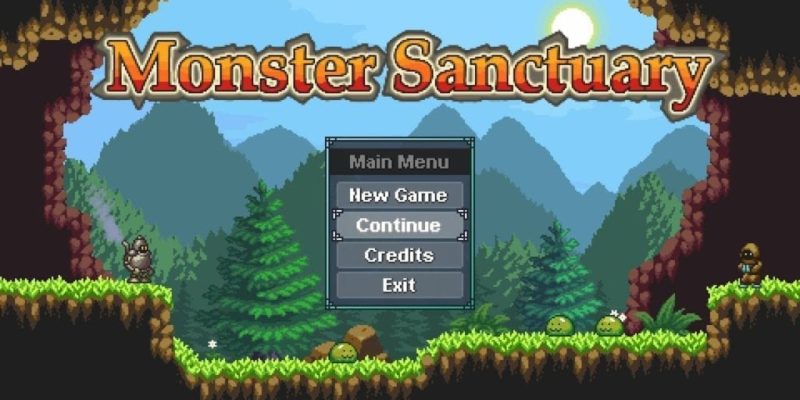 Monster Sanctuary looks to be the Pokémon and Monster Hunter of pixel-based adventure RPGs. And it’s coming to Steam Early Access on August 28.

In this Metroidvania-inspired platformer, players will collect, hatch, feed, and train their very own team of elite monsters. Currently, players will have access to over 100 different monsters. Each will have various powers that will help players traverse the vast and expanding world. For example, some will be able to cut down vines or other obstacles that may lead to hidden treasure or an alternate route. Others will allow players to glide over gaps in the terrain.

Additionally, monsters will have their own unique skill trees. Players will be able to customize their monsters to suit different playstyles or fill in any gaps in their monster party. Training monsters and building the perfect party will be crucial to finding favorable battles as well.

Throughout the story, players will face 3v3 encounters. It’s up to the player to determine which team of three they want to have out. Combat mode will rely on configuring your monster party. Finding the perfect monster combination and defeating enemies will allow players to obtain rare eggs.

The story behind Monster Sanctuary has been lightly detailed. Players will begin their journey as the youngest heir of an ancient bloodline of Monster Keepers. Your goal will be to follow in your ancestors’ footsteps and unravel the cause of a mystery that threatens the peace between humans and monsters.

Here’s a look at the new trailer released earlier today.

Monster Sanctuary will be the first game released by developer Moi Rai Games. Originally, the game started out as a free-time project in 2015. Eventually, it went into full development in 2018 with the help of Kickstarter backers. Through Kickstarter, Monster Sanctuary was able to raise over €105,000. The starting goal for the project was to raise €20,000 with the promise of releasing the game and including 50 monsters. Moi Rai Games has since added more stretch goals. These include an online multiplayer mode along with a Switch release, speedrun mode, and new game+.

Right now, players can wishlist Monster Sanctuary on Steam as well as download a demo version. Starting on August 28, it will be available in early access for $17.99/€15.99/£13.99. There is no official release date yet, but the Kickstarter page estimates it will be out around October 2020. Until then, fans can stay updated by checking out Monster Sanctuary on Facebook, Twitter, or Discord.