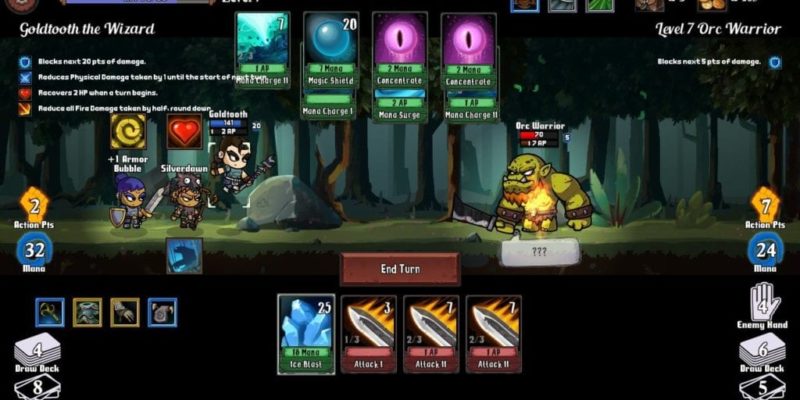 Monster Slayers is a wonderfully misleading name – not because this game doesn’t involve slaying monsters, but because it’s one of the most generic names I’ve ever heard, while the game itself is one of the least generic games I’ve played in a few years. Take a short-form RPG, add in a pinch of roguelike elements like permadeath and unlockable upgrades, and then marinade it in a deck-building system, and you have Monster Slayers.

Here’s how it works: you pick one of six classes, each of which have a different starting deck and (generally) different cards available. Your job, as a rookie monster slayer, is to go into three of six woefully dangerous dungeons in such of legendary monsters. Kill three, and you win! Die, and you, uh, die. On the plus side, a tiny percentage of your gold and any equipment you weren’t actually using carries over to your next character, as does your “Fame” – the currency you use to upgrade classes or unlock new features.

The problem with this is that it’s so innately unique that I suspect I’m going to have to spend about five dry paragraphs explaining how it works. Bear with me, eh?

It looks complex, but Monster Slayers is really incredibly simple to play. The cards at the top have been played this round; the cards at the bottom are in your hand, and everything else is just raw information.

Dungeons themselves are made up of interconnecting rooms, each of which contains one encounter – be it a shop, a monster, treasure, or whatever. Planning your route through the dungeon matters: you don’t want to use up every healer you find immediately because you might need them later; equally, as levelling up instantly fills your health, you want to keep a careful eye on your experience and try to level up right before you take on a tough fight.

Fights themselves play out in turns, with you and your opponent drawing a hand of cards from your deck, playing them, and then drawing more before the opponent’s turn begins. When you’ve drawn your entire deck, it’s reshuffled and the fight continues.

Cards are divided up into three types, with Attack cards generally doing physical damage, Magic cards being a mix of offence and defense (fireballs and magic shields, say), and Support cards playing with card drawing mechanics or having more indirect effects. That’s a very rough summary: not everything ties into that. There are Attack cards that inflict fire damage or make opponents discard their cards, but it’s not a bad rule of thumb.

This is also where classes come into it. While each class starts with a predetermined deck, and while any class can use basically anything you find, they’re heavily skewed towards particular playstyles. Rogues can build up massive chains of cards with the ability to routinely draw more cards, and use previously played cards to inflict more damage – the Backstab card, for instance, inflicts damage based on how many other cards you’ve played that turn. 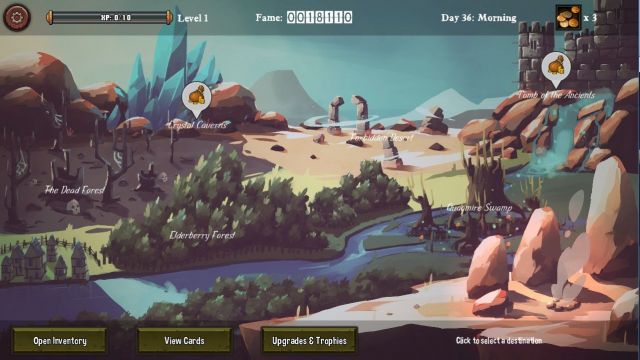 HERE BE DRAGONS. And also bears, orcs, spiders, jaguar people, and a dizzying array of other bastards with decks full of cards that will make you weep.

To paraphrase an old meme, while Rogues do it naked, the more wizardly types seem a lot more reliant on equipment. Magic cards cost mana to use, and this recharges turn by turn… unless you have a lot of Mana Charge cards, or equipment which grants bonus mana, in which case they’re a powerhouse of possibility. Barbarians can rush down foes with powerful strikes that also put themselves in harm’s way, while Knights can specialise in either offense or defense. Etc.

The real key, though, is the deck-building, and this is something you can’t really “master” because so much of how you play depends on what cards you find. Shops sell cards, treasure grants you cards, and levelling up often gives you a choice between more, but you can never be quite sure what you’re going to get. That Frostblast spell might look amazing, but if you’re a Knight then you’re unlikely to ever have the mana to actually use it, so all it’ll do is clog up your hand if you draw it. Fill up on cards that require large amounts of mana or action points, too, and you’re only going to be able to use one or two cards a turn before it flips over to your opponent – but if you don’t have any you’re not going to inflict any real damage at all. It’s not a surprise that the two options a healer offers you are either to restore you to full HP or to delete a card from your deck, because these are two of the most useful things.

This is what makes Monster Slayers both incredibly more-ish and incredibly frustrating, in the most delicious of ways. Getting lucky and winding up with just the cards to perfect your deck is great… but then you make a dumb mistake, die, and wind up with an absolute shitter of a deck on your next run, due either to bad luck or poor planning. Even then, though, there’s enough leeway to just about make it succeed if you plan out your path through the dungeons carefully, choose companions wisely for the buffs you need, level up right before each boss, and make the most of the limited resources. And hey, even if you fail, you’ve got some equipment and some Fame for your next run. 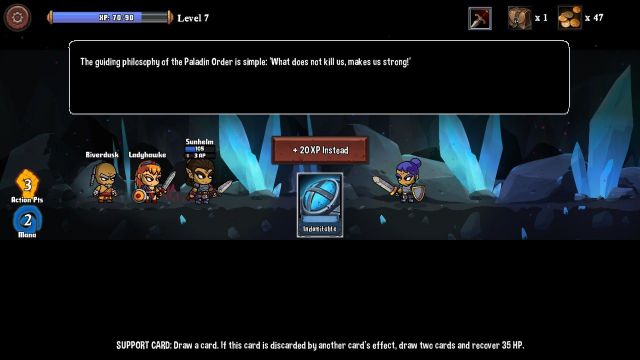 Pretty much everything is a trade-off, and often, not taking the cards is the right choice.

It also helps greatly that every single enemy feels entirely unique. An Undead Knight doesn’t play like a Priestess or a Gold Dragon, and nor should it. Undead are immune to bleeding effects and resist poison, while Gold Dragons are all about lightning attacks that screw over your action points. Then there are the sods that inflict poison, which damages you every time you play a card, making Rogues weep in the corner. Each enemy poses a unique challenge for the different types of classes, and you’ll rapidly get an appreciation for – and fear of – each type of enemy.

Also, fuck Priestesses and their ability to make you discard all cards of one type from your hand. Seriously.

For all of that, its randomisation and focus on quick playthroughs rather than extended campaigns means that Monster Slayers isn’t the deepest of games. It’s about getting in, playing until you win or lose (usually less than an hour later) and then either starting up again or quitting out and coming back a few hours later. On the other hand, it’s pretty finely tuned and while it may not have too much depth, it’s got a fair amount of breadth in terms of how you can exploit its systems – and how the game exploits them against you. Although it had trouble against my immortal Cleric who had a deck full of Mana Charge cards, and gained block and dealt damage whenever one was used.

As an example, I’ve played for 12 hours and beaten the end boss (whose strengths and abilities are different on each playthrough, but hinted at as you proceed) with three of the game’s classes. I’ve got a pretty good grasp on how Monster Slayers works, I’m not done with it yet, and I’ve spent half a day with the thing. 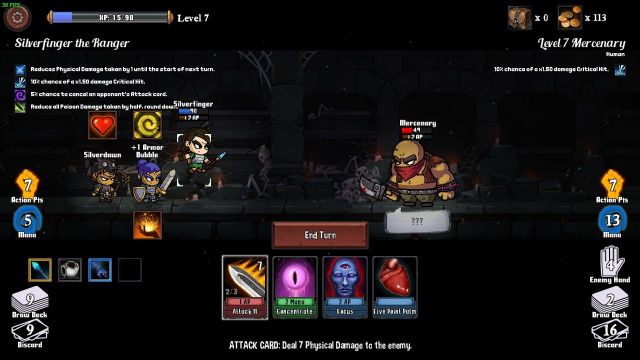 As you progress in each run, you can acquire two companions, each of which offer up powerful buffs that recharge over the course of several battles. Considering how swiftly death can come and how even easy encounters can wear you down, saving them for the right moment matters.

The closest comparison I can make, I think, is to perennial oh-let’s-just-play-for-five-minutes game Desktop Dungeons. As with that, there’s a general strategy to how you play each class, but said strategy needs to be modified based on what the game throws at you. And – depending on how things shake out – you may wind up in a situation that’s borderline impossible. Them’s the breaks, but it doesn’t really matter because you’ve probably only wasted 10 minutes and you can start up a new game with a couple of clicks.

At this point, it feels pretty close to finished. I mean, I’d be largely satisfied with this if I bought it right now, but I’m also a little glad that it’s not out just yet. There are a couple of noticeable (albeit not game-breaking) bugs, some concepts are poorly explained, and some of the text might need to be fixed (like the game asking you to pick a reward for levelling up and then not offering any to you, although this may also be a bug).

After 12 hours, I can say I’m having a rather good time with Monster Slayers – and hopefully, launch won’t be the end of the road. This is a game ripe for expansion with new monsters, new classes, and new cards, and considering it’s purely single-player and focuses a lot on playing your hand the best you can, it’s not something where balance is of paramount importance. If you’re looking for a coffee break game, or something to idle with while watching a video, keep your eyes on Monster Slayers.

Monster Slayers is due to launch on 23 March.