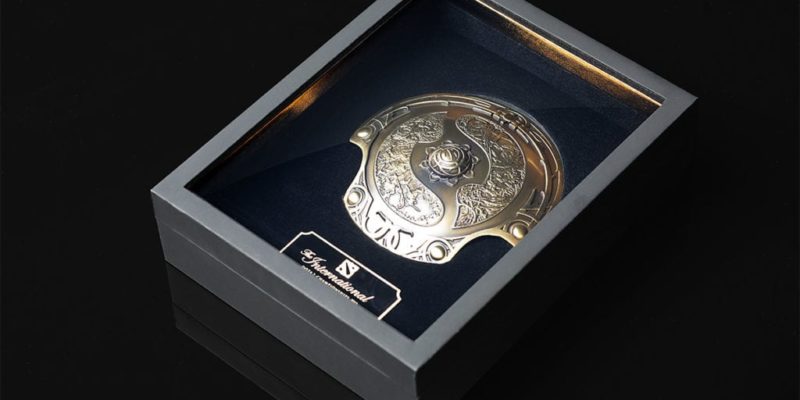 Two bits of Dota 2 Compendium news today. First, the Immortal Treasure III and the additional Compendium Pet Style should be out by the end of the week, which is good news for anyone wanting yet more shiny stuff for their heroes to wear.

Second, Valve are offering a physical reward to anyone who gets their Compendium up to level 1000. They’re crafting the 2015 Collector’s Aegis of Champions, a 1/5 scale replica of The International’s winner’s trophy, and it’ll be shipped out to anyone who hits Compendium level 1000 by the end of the Grand Finals.

According to Valve, the Collector’s Aegis is an “alloy replica, with antique brass plating”, which is inscribed on the back with the year and a gold-finished insignia signifying this year’s theme. Here it is:

It’s not going to be cheap to get your hands on one, though. I don’t know how many more methods Valve will offer in terms of raising your Compendium level without paying cash, but to buy your way to level 1000… well, 24 Compendium levels costs $9.99 USD. It’d take 41.6 of these (so, 42) to get 1000 levels, which would cost you about $419.58 USD. It does look awfully nice, but I don’t think I’d consider buying my way up to level 1000 unless I was pretty close anyway.

You can read a little more about the mini-Aegis over on the Dota 2 blog.

Company of Heroes 2: The British Forces coming from Relic with balance changes