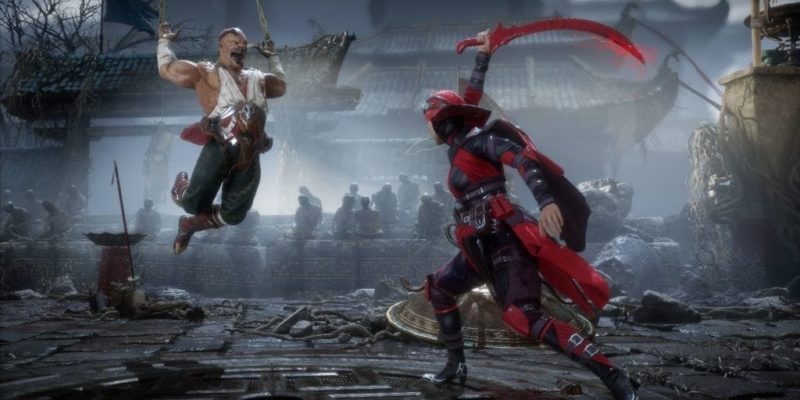 Netherrealm Studios got fans ready for fatalities today when it took to the stage and Twitch and revealed Mortal Kombat 11‘s gameplay. The livestreamed reveals simultaneously took place on two stages, one in Los Angeles and the other in London. Announced in December during The Game Awards 2018, fans were given a gruesome cinematic trailer. Today, they got a chance to see the game in action.

The event kicked off with a montage trailer featuring Sub Zero, Liu Kang, and Baraka, as well as the return of Skarlet — who was described as the “most demanded” character since being offered as Mortal Kombat X DLC. New characters include Geras, who has the ability to manipulate time.

Characters shown during the reveal are:

UFC Hall of Famer Ronda Rousey will be the voice of Sonya Blade in her big return to the franchise. Her character will carry a variety of gadgets to augment her martial arts moves. However, there has been no word yet as to whether Luke and Cassie Cage will be in the next game for a full family brawl.

New characters include Geras, who has earth and time manipulation abilities. Meanwhile, Skarlet has a variety of brutal blood attacks, and Baraka will be extra bitey. One of his fatalities includes ripping an opponent’s face off to eat their brains.

In addition to the characters shown at the reveal event, Netherrealm hinted that they might show off a surprise character during the January 30 Kombat Kast. Just then, an electric blue streak ran across the screen, which looks suspiciously like Reverse Flash to me, except for some differences (yellow, with a black hood and black boots). If I’m right, we could be looking at some crossover with Injustice or the DC Universe in general.

Gameplay changes include two separate power meters for offense and defense moves, arranged in an “L” shape. So, players won’t have to choose between spending their meters between the two types of actions.

It also looks like they may replace the famously brutal X-Ray moves with Fatal Blows. These devastating moves become available when an opponent’s health drops below 30 percent on their second life bar. Despite the name, these special moves don’t always defeat opponents, but they do deal tremendous damage. If the Fatal Blow misses, then players will have to wait for a cooldown timer to reset before trying it again.

Lastly, the presentation revealed a new move called the “Flawless Block.” As its name indicates, perfectly timed blocks will open an opportunity to launch powerful counter-moves.

But what remains constant is the wide variety of bloody finishing moves.

Other reveals included the full opening cinematic for the story, which picks up directly after the events of Mortal Kombat X. In it, Raiden fully embraces his ruthless streak as he tortures and beheads Shinock to use as a symbol of his wrath. However, the story will rely heavily on manipulation, so maybe a host of other classic characters are due for a comeback.

The woman in the cinematic is Kronika, the Keeper of Time and creator of existence. She is featured as the first female boss character in Mortal Kombat history.

Mortal Kombat 11 is slated to release on April 23, 2019. Pre-ordering gets you Shao Kahn for free.

Sea Of Thieves Install Size Drops By Half In Next Update