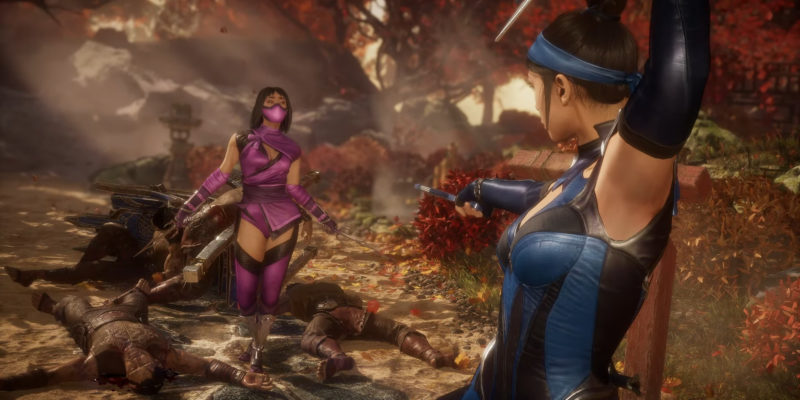 Mileena got her gameplay trailer today, and now I feel like I need a shower. The third and final kontestant in the Kombat Pack 2 for Mortal Kombat 11, Mileena shows she isn’t afraid to get her hands (feet, mouth, arms, knees, fingers, toes) dirty. Mileena was arguably the most requested character for the game, outside of Hsu Hao of course. Her time away from the roster certainly hasn’t dulled her bloodlust. In fact, after watching the trailer, I think the delay made it worse.

She’s about as violent and vile as expected, which will no doubt delight her throng of fans. And she really likes necks, or at least the taste. More than once in the trailer, she uses her sharpened teeth to take a meaty chunk out of necks. Naturally, the camera likes to get good and close for a slow-motion shot showing action in all its bloody detail. Mileena also uses claws to fight, demonstrating that she’s not all about kicks and sais. Some of her normals use a blend of claws and sais to good effect. She can still teleport kick opponents (multiple times!) and roll around at the speed of sound. Indeed, she still looks like Mileena, but a bit flashier.

Mileena is armed with dual sais, using them to stab and jab her opponent’s head, eyes, torso, and pretty much everywhere it’ll hurt the most. Her teleporting sais have remixed a bit. They show up in grabs, and one of her moves allows her to send a sai  sliding across the ground, flying up to hit her opponent before returning from the sky for a second strike.

All in all, Mileena looks fantastic. She’s swift, violent, and a lot of her moves have flair. I especially love her ‘knife game’ grab, where she avoids stabbing her fingers while her hand lies on her enemy’s face. That’s just messed up, man. Her speed and agility will no doubt make her a fun character to play, and a nightmare to face.

Mileena joins the roster on November 17 with the launch of the Kombat Pack 2 and Mortal Kombat 11: Ultimate.