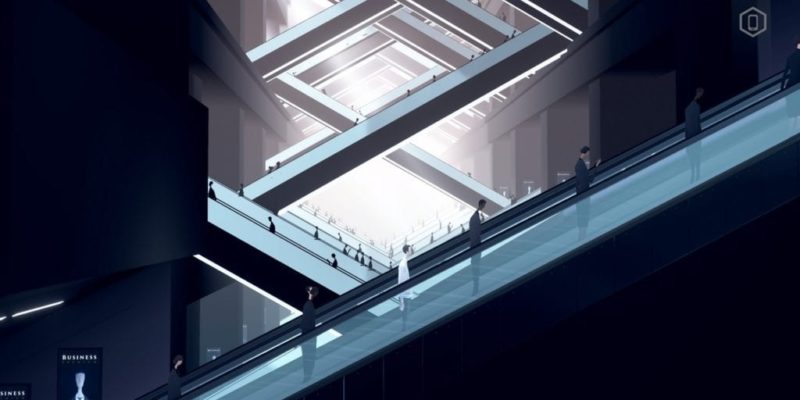 E3’s PC Gaming Show has always had a soft spot for indie games. This past E3 was the first time many of us laid eyes on Krillbite Studio’s Mosaic, and it left a damn good impression. The dark, surrealistic adventure game was initially revealed three years ago but remained relatively silent until its E3 debut. Afterward, things went quiet again – until just recently, when publisher Raw Fury announced Mosaic‘s availability on Apple Arcade.

It looks like we PC gamers have a little while to wait before we ourselves can join the dystopian workforce. Mosaic is set to launch on Steam on December 5 this year. Those interested enough to preorder will be upgraded for free to the 1% Edition, which comes with a copy of the game’s soundtrack and the 1% DLC.

The world of Mosaic is one ruled by soulless corporations, mindless distractions, and strict repetition. The player’s character is a disgruntled, despondent salaryman who spends his days simply existing. He collects virtual blops on his phone, walks to work, works, and goes home. It’s a meaningless existence and one that he desperately wants out of. One day, something changes for him — can he finally escape this urban prison? That’s where the player comes in.

A Mosaic of ideas

Mosaic is an atmospheric adventure game in the same vein as those it draws clear inspiration from, namely the work of Playdead. Playdead’s recent release, Inside, explores somewhat similar themes to Mosaic. If Krillbite has accomplished what it set out to do, then Mosaic should easily find itself in the same discussion.

Prior to this latest release, Krillbite Studio was hard at work on Among the Sleep, a horror game from the perspective of a child. It was an interesting concept, but not all of their ideas translated over to the gameplay. But now, with another notch under its belt, the studio seems to have found what they were lacking. Mosaic is more focused than Among the Sleep, fully committed to exploring its singular theme. On December 5, we’ll know just how much it makes us want to quit our 9-to-5s.

By Elise Nelson14 mins ago
News