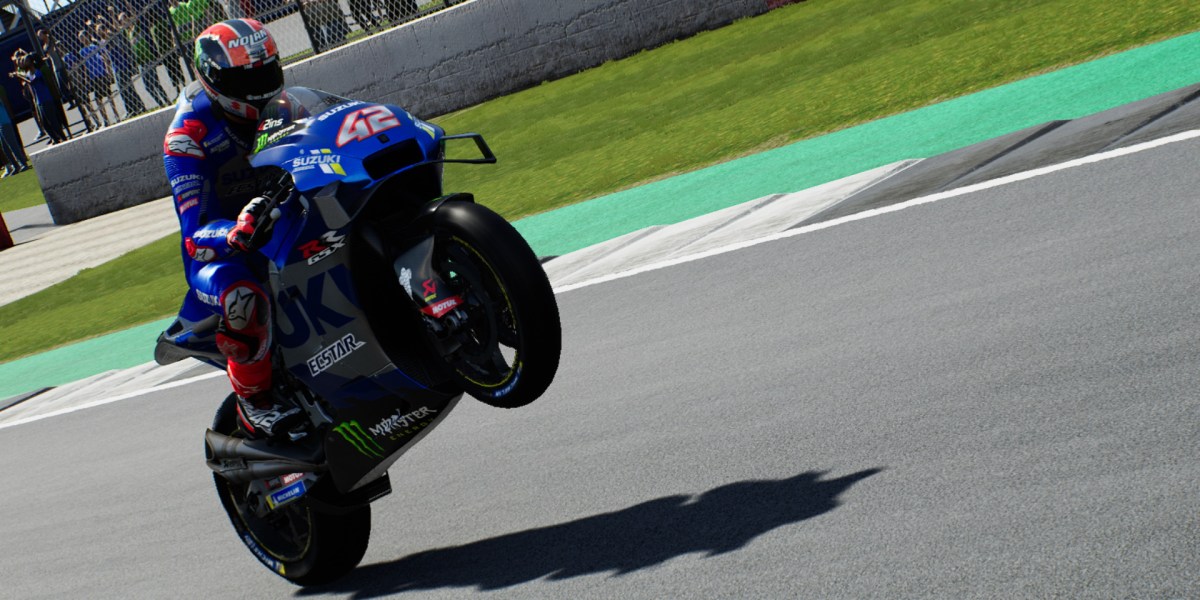 For over 10 years, Italian publisher Milestone has practically monopolized the bike racing subgenre. Be it MXGP, Monster Racing Supercross, RIDE, or MotoGP, just about every significant bike racing game on the market is released under its guidance. After today, MotoGP 21 becomes Milestone’s latest addition to that dominant catalog.

MotoGP is the officially licensed video game franchise for the racing discipline of the same name. It is the oldest motorsport competition in history, widely considered the pinnacle of two-wheeled racing. The games are annually released similarly to Codemasters’ F1 series. Each installment features updated bikes and tracks to reflect the changes seen in its real-life counterpart.

Unlike many of Milestone’s other products though, MotoGP 21 is not a forgiving game. The learning curve here is much steeper than both other bike racing games and mainstream racers like Forza Motorsport. This is because, as a bike-racing simulator, the driving mechanics in MotoGP are unlike anything else.

Even the most experienced Asseto Corsa or Project CARS players may struggle to even get their bike around a track in this game. Everything you’ve learned about driving is widely irrelevant for bike racing. The biggest change of all is that there’s a focus on balancing the weight of your bike through corners.

There are tutorials that can help ease players into the experience of racing a bike. Truthfully, they aren’t the best and your best option is to just practice.

Traditional racing principles such as holding a good racing line and hitting your braking points are still important. However, weaving your bike through each corner by shifting its weight appropriately is the most important skill to develop. Getting good at this can take a lot of practice.

For many, this will be the decisive selling point of MotoGP 21. You’re either going to love the challenge of conquering something new or hate the unfamiliarity. Personally, I enjoyed my time improving, but I can’t say I prefer the feel of MotoGP 21 over its competitors. Bike racing necessarily isn’t the easiest motorsport to turn into a fulfilling game, though. I suspect that those more invested in the discipline will enjoy the riding experience more than I did.

There isn’t too much variety in terms of game modes in MotoGP 21. Most players will likely jump into the career mode or play online. The latter only offers the ability to set up one-off races rather than a dedicated online league. This is an unfortunate omission, as it means that those looking to compete against their friends have limited options.

As for the career mode, not too much has changed since the last game. You are still tasked with climbing up the various disciplines starting out in Moto3, eventually becoming the champion of the MotoGP itself. You can either do this by building up your own team or signing for one of the existing teams. Eventually, you are given the option to set up junior teams in the lower disciplines bringing somewhat of a secondary management aspect to MotoGP 21.

At the start of each season, you are now given the option to either race the exact calendar from the real-life MotoGP or a more rounded alternative. Due to the pandemic, however, some tracks are raced twice or omitted from the calendar. It’s a nice touch to be given this option, as I’m sure many other developers would have glossed over the calendar restructure.

Speaking of tracks, Portugal’s Algarve has now been added to the MotoGP games. As a result, all 20 circuits present in the official calendar are now playable. Among this list are some personal favorites like Catalunya, Mugello, and Motegi. There are even three historical tracks including my favorite circuit in world racing, Mazda Laguna Seca. So, I have no complaints regarding the locations at which you get to ride these 240hp motorcycles.

Smooth but not silky

Milestone has been vocal about the difficulties COVID has caused it. Developing a large-scale racing game remotely has to be a difficult task, which makes the optimization of MotoGP 21 rather impressive. In an industry where many annually released games don’t perform as well as expected, MotoGP is a refreshing change.

Throughout my time playing and reviewing MotoGP21, I did not experience a single notable frame drop. For the most part, my RTX 2060 managed a stable 90 fps at high settings, 144op. During wet conditions and rain, this would drop into the 70s. At low settings (and 1440p), the framerate climbed into the low 100s. This is more than serviceable, and those with higher performance GPUs should have no problems running this game well.

If you’re the kind of person who likes to take nice screenshots you’ll be thrilled to hear that MotoGP 21‘s photo mode is one of the best I’ve seen.

MotoGP 21 is by no means a bad-looking game. In the grand scheme of things, you could even argue that it looks nice. However, the racing game genre is home to some of the industry’s best-looking titles. When compared to the breathtaking visuals available in Project CARS 2 and Forza Horizon 4, however, the game does fall short.

Even other annually released racers like F1 2020 edge it out, and that hasn’t even received the next-gen treatment yet. The transition to next-gen consoles is usually great for PC as it pushes developers to create better-looking games on all platforms. However, that just isn’t the case with MotoGP 21. At best, this looks marginally better than last year’s installment.

They say consistency is a racing driver’s strongest skill, but I think that Milestone might have taken that too literally. MotoGP 21 looks, plays, and feels an awful lot like its predecessor. A lack of major innovation to career mode and overly similar driving mechanics ensure that MotoGP fulfills the stereotype of the dull annual release. It may not quite be FIFA levels of rehashed, but I would have liked to have seen more. Regardless, MotoGP 21 is a decent enough racing game in its own right, but it could have been more.

Although certainly not extraordinary, MotoGP 21 is a decent enough racing game. Some more innovation would have been nice but given the complications caused by COVID, I can understand the limitations in place. Series veterans will most likely enjoy this but I can't see it attracting many newcomers with so many great racing options already on the market.