First off, open your inventory while on the world map To do this, you can either click on the icon or hit the ‘I’ key. Find the banner under the Misc./barrel category. Drag the banner to the banner slot below your item slots (hint: it’s the one slot with a flag in it). And voila, you have a banner.

How to use a banner in Mount & Blade II: Bannerlord

Your character will never use the banner themselves. While you would suspect they could take it in the left hand instead of a shield, they won’t. The banner will be given out randomly to a member of the squad the character commands (this is also how it works with banners given to companions). 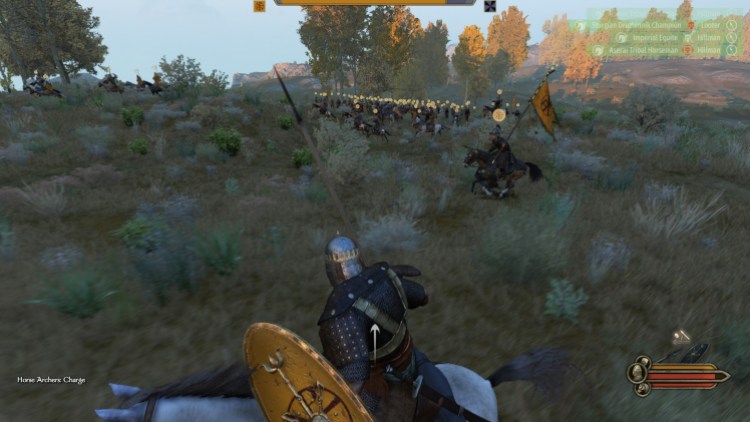 That’s it, the banner boost will be provided the unit commanded by the character who has equipped the banner.

Things to think about with banners

While banners are a fun little mechanic to have in Mount & Blade II: Bannerlord, it doesn’t mean that I don’t have some complaints about it. And by the grace of SEO articles having to be at least 300 words long, here they are:

The banner bonuses are really small. The Banner of Shifting Sands you see me equip in the guide gives an 0.08 bonus to troop speed. That doesn’t feel worthy of writing home about. On the other hand, this bonus keeps banners a neat addition without turning them into something that can determine banners.

You can’t carry the banner yourself. Look, I see that the NPCs can swing swords perfectly fine with the banner. Why can’t I? Is it an animation issue? I’m not asking to for the banner to be usable as a weapon as if unto Battle Brothers.

No banner capture mechanic. Look, if you’ve read/watched Sharpe’s Eagle, you know that capturing a banner can be a powerful thing. Why isn’t it in Mount & Blade II: Bannerlord?

What is Cronus Zen in Modern Warfare 2 — Explained

How to build the best Modern Warfare 2 Minibak class